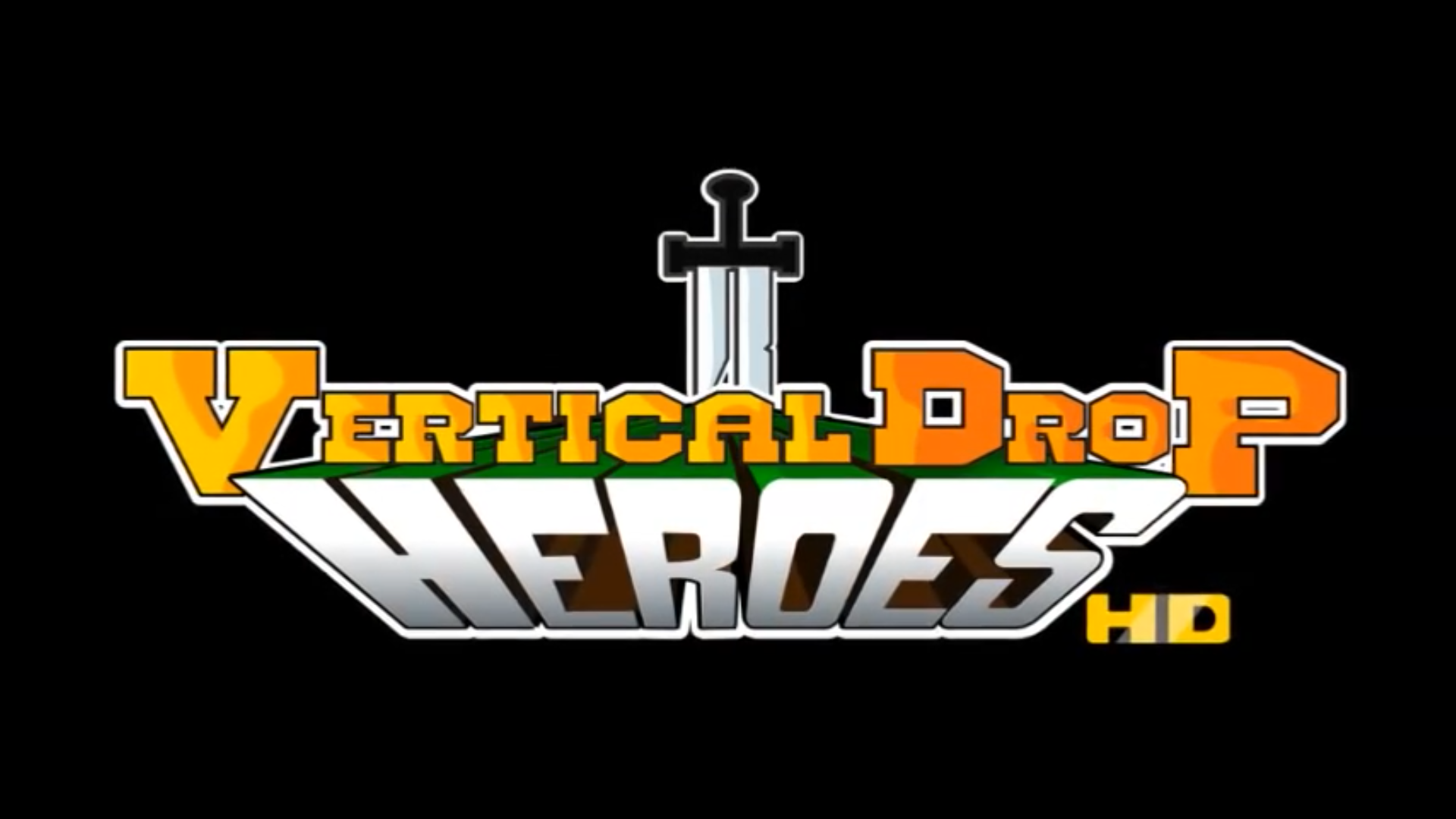 Here we arrive at the next attempt to change a notably flawed Flash game into a successful PC gaming experience, but damned if Vertical Drop Heroes HD isn’t the best effort yet. Generally, all any such game can hope for is to be unoffensive to decent gaming tastes, but Vertical Drop went against the instruction of its own name and aimed higher. Coming out on the victorious end of this descent into indie game obscurity, Vertical Drop is fit to be judged beyond its browser-based roots, but that doesn’t mean it thrives under the pressure.

Vertical Drop Heroes HD is an action platformer where you play a character with unique skills who must, for reasons unknown, descend down 10 levels defeating enemies who get in your way, including a boss before progressing. “Only 10 levels?” you say? Well Nerdook Productions draws on aspects of a genre as old as PC gaming itself to make those 10 levels feel a lot longer. 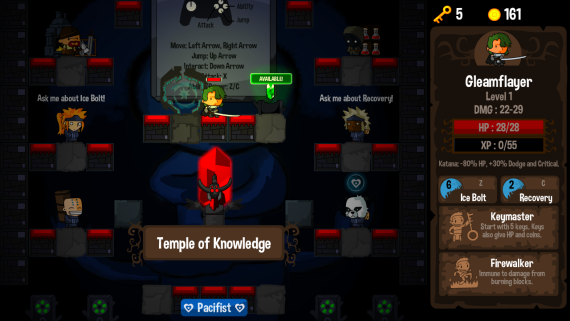 The one man (yes, only one man) behind Vertical Drop Heroes, has taken a taste of the indie game flavor of the month: Roguelikes. If you’re looking for a good drinking game, watch preview footage for upcoming indie games, and take a shot every time they say “roguelike” (Disclaimer: Please drink responsibly; Hardcore Gamer is not liable for any liver damage incurred as a result of this game). However, the question is “Can Vertical Drop distinguish itself among the substantial competition?” not how many points for originality it gets (somewhere between 0 and .01).

Unlike the other roguelikes, or “roguelike-likes,” that simply shoehorn in permanent death and call it a day, Vertical Drop uses specific gameplay decisions to stay as true as necessary to the genre. Yes, when your character dies, it’s gone, and you’re back choosing another level-one character with different skills and weapons to try to start on level one with. But the game also uses procedurally generated levels to make the level layout, item locations and enemy locations different every time. Procedural generation has certainly seen its downsides as of late (looking at you, Daylight), but this rendition of the practice does what it’s supposed to do: add unpredictability and replayability. 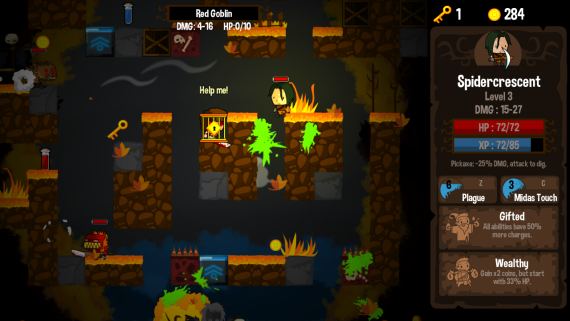 Choosing a character also uses this procedural generation. When you start the game, you choose between three characters with a random combination of weapons, stats, active abilities and passive abilities. As you progress with one character, you can unlock more abilities for future characters to potentially use (since you certainly won’t last with the one you have). You can “re-roll” for three new characters if you don’t like the options, but this costs precious gold coins.

Unfortunately, this is one of the most annoying parts of the game. When I started playing, I purchased new upgrades with my pile of gold as they came along, quickly realizing that adding more potential abilities to the pool decreased the likelihood that I’d get a character with the abilities I wanted most. This made me spend gold on re-rolling until I finally settled on one that sort of meshed with my expectations of a good character, but also made me wonder what would have been so bad about letting the player choose which skills to combine. One of the flaws of roguelikes is that success and failure in the game can teeter on sheer luck, and getting a good character on a lucky roll can mean everything in Vertical Drop. 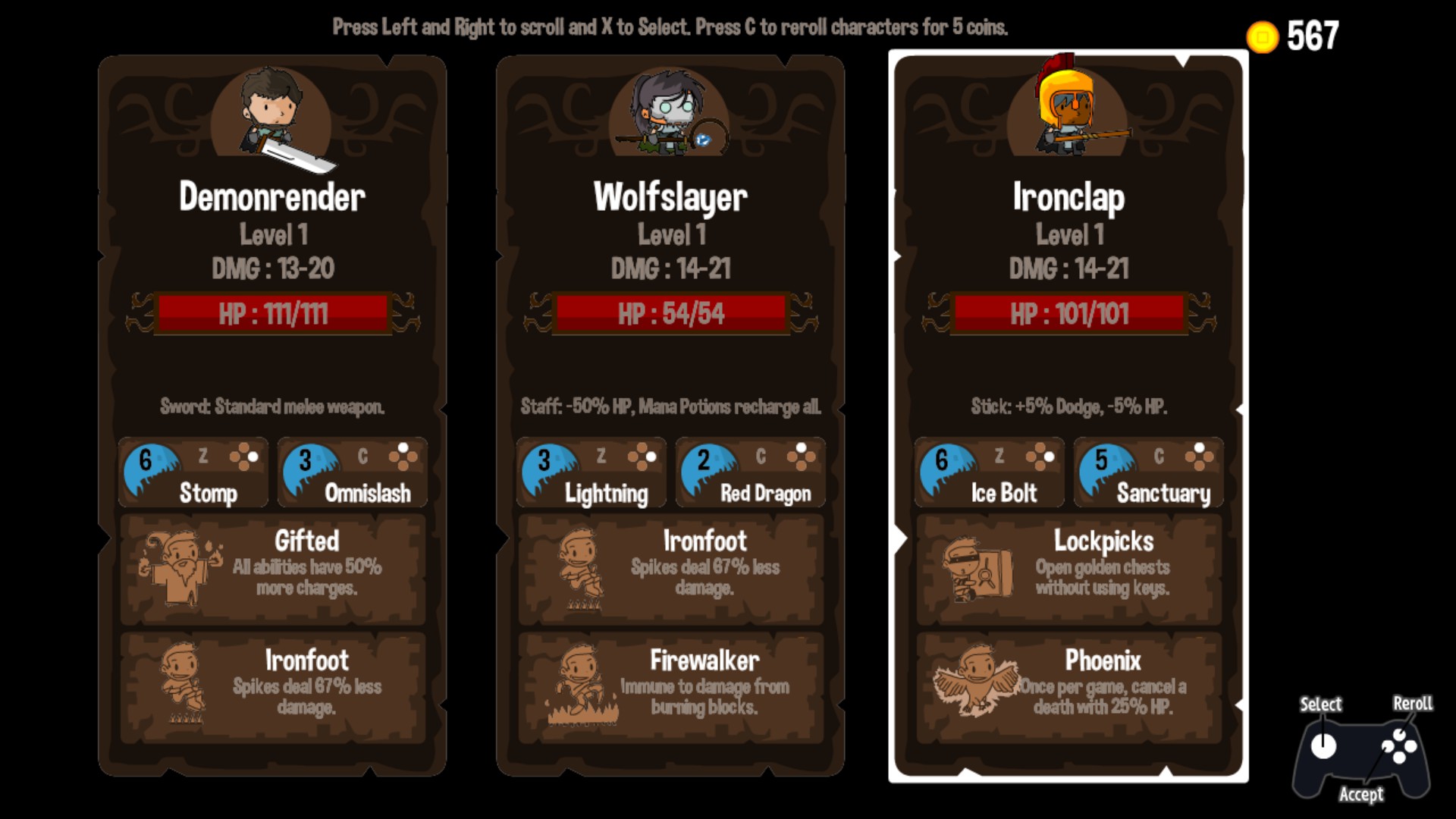 The game avoids this reliance on fate within the levels. The procedural generation and level-destruction mechanics provide a great opportunity for players to form their own paths to the bottom. In-level shrines will appear throughout that offer one-time buffs (for a nominal fee), but none of these manage to be game-breaking enough to warrant a curse on all things random. Each level also has a refreshing variety of minions to battle, more of which will spawn if you pass one of their flags.

Vertical Drop falls flat, though, in the biggest minions of all: bosses. At the bottom of each level, a boss guards a locked door, but these beasts run the gamut on annoying end battles: sometimes they’re too easy, sometimes they’re smash-your-face-in hard, but most of the time you’ll just be zoning them out with projectiles or long-range melee weapons. Think Dark Souls, if it was a Flash game – they’re just tedious. You just want to skip them.

Luckily, you can. The locked door the bosses stand on can be opened with five keys, which is hard to come by even if you horde them and don’t rescue any trapped heroes along the way. Because of the annoying boss fights and permanent death, I found myself doing exactly that, skipping the bosses that were especially ricey. Due to the procedural generation, however, sometimes the boss will be directly standing on top of the door, while other times the door will be a few layers beneath the boss, allowing an easy, safe path to completion. 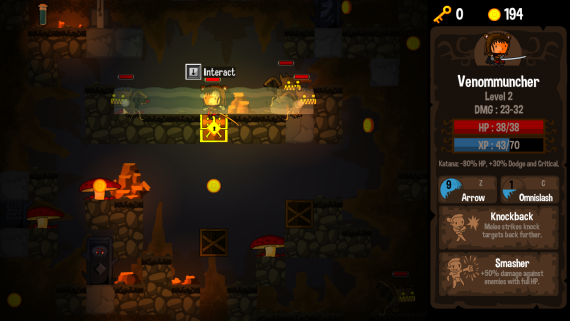 The problem with Vertical Drop Heroes HD is that it’s not very fun. The nature of the game itself, as a roguelike, offers an enticing challenge to complete all 10 levels (plus a final boss fight), but once I did, I had no interest in playing ever again. It’s more a game you enjoy completing than actually playing. While there’s some joy at the start, it’s too easy to get burnt out on the grinding, dying, grinding, dying, grinding, dying pattern, all the while hoping you’ll get the perfect combination of character traits that you would both enjoy and succeed with. Back to the original question: does Vertical Drop Heroes HD succeed at making a flawed Flash game into a worthwhile PC gaming experience? Well… it doesn’t fail. It’s hard to overlook the things it does well (level design, variety in abilities, etc), but it’s just not up to the challenge of balancing the tediousness of a roguelike with the fun of an action platformer.