On the surface, Legend of Heroes: Trails in the Sky seems like a throwback to the halcyon days of JRPGs – the 32-Bit Era, where the expanded space of disk-based media allowed for expansive adventures like nothing we’d seen before. But while the pre-rendered sprites and simple polygonal environments of Trails capture the look of classics like Grandia and Xenogears, the gameplay borrows heavily from western design sensibilities to create a feel all its own. Trails in the Sky is at once nostalgic and entirely fresh.

Cassius Bright is a Bracer – a mercenary cop who works for the public good – and he’s among the best in the world. His headstrong young daughter Estelle looks up to him, even though his frequent travelling often leaves her home alone. After one particularly tumultuous business trip, Cassius brings her a present of sorts – a young boy named Joshua who they adopt into their family. Josh is cold and distant – clearly haunted by his past – but the adopted siblings become inseparable nonetheless. At 16 they both follow in their father’s footsteps and become bracers. 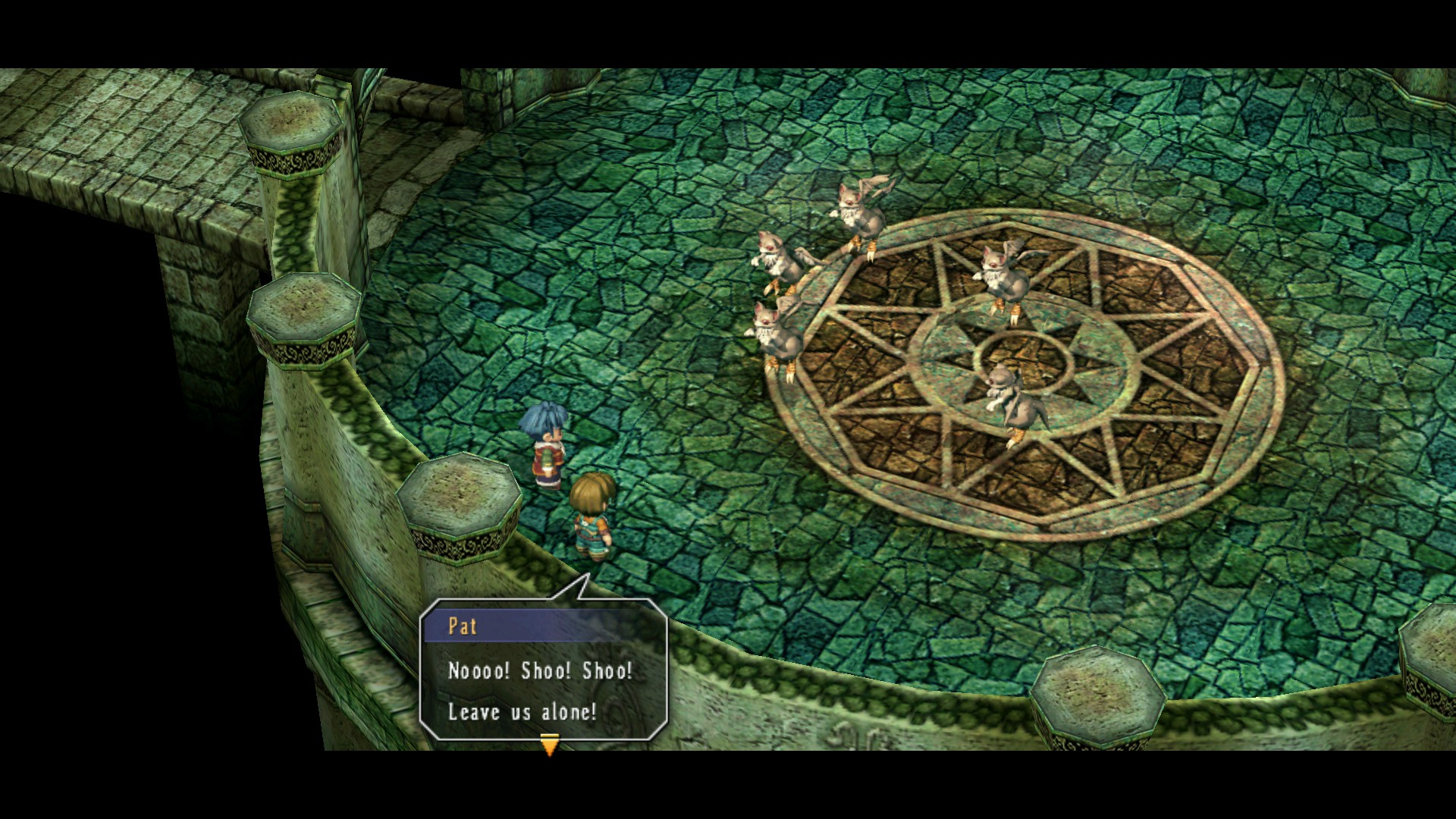 When their first mission takes them to an ancient, mysterious tower, you might think you know where this story is headed – and you’d be wrong. Trails in the Sky is much more concerned with the day to day lives of the Bright siblings than it is with any sort of epic quest. The bulk of the game focuses on the siblings doing odd jobs, first around their hometown of Rolent, then in various cities throughout the kingdom of Liberl. While there is a central mystery with world-shaking stakes, the heroes don’t let it consume their lives. They travel the kingdom, doing their job and pursuing their own dreams – but when the chance comes to save the world, they take it.

This more laid-back story works only thanks to rock-solid character writing. Every single character in Trails has their own history, ambitions, and social connections.

“Pffft, that’s nothing special” you say, “most good JRPGs take time to flesh out their parties.”

You misread that, strawman reader person; I said Every. Single. Character. Each and every NPC in Liberl, from the precocious little girl by the coffee shop to the flustered clerk at the general store, has their own name and motivations and interpersonal relationships with other NPCs. And as Estelle and Josh go through their stories, so too does everyone else in the world around them. While you’re out saving your friend’s farm from monsters, the general store clerk’s mom starts asking random women around town to marry him. Those monsters create a supply problem at the local café, so they talk about changing their menu, and then they actually change what items you can buy from the café. 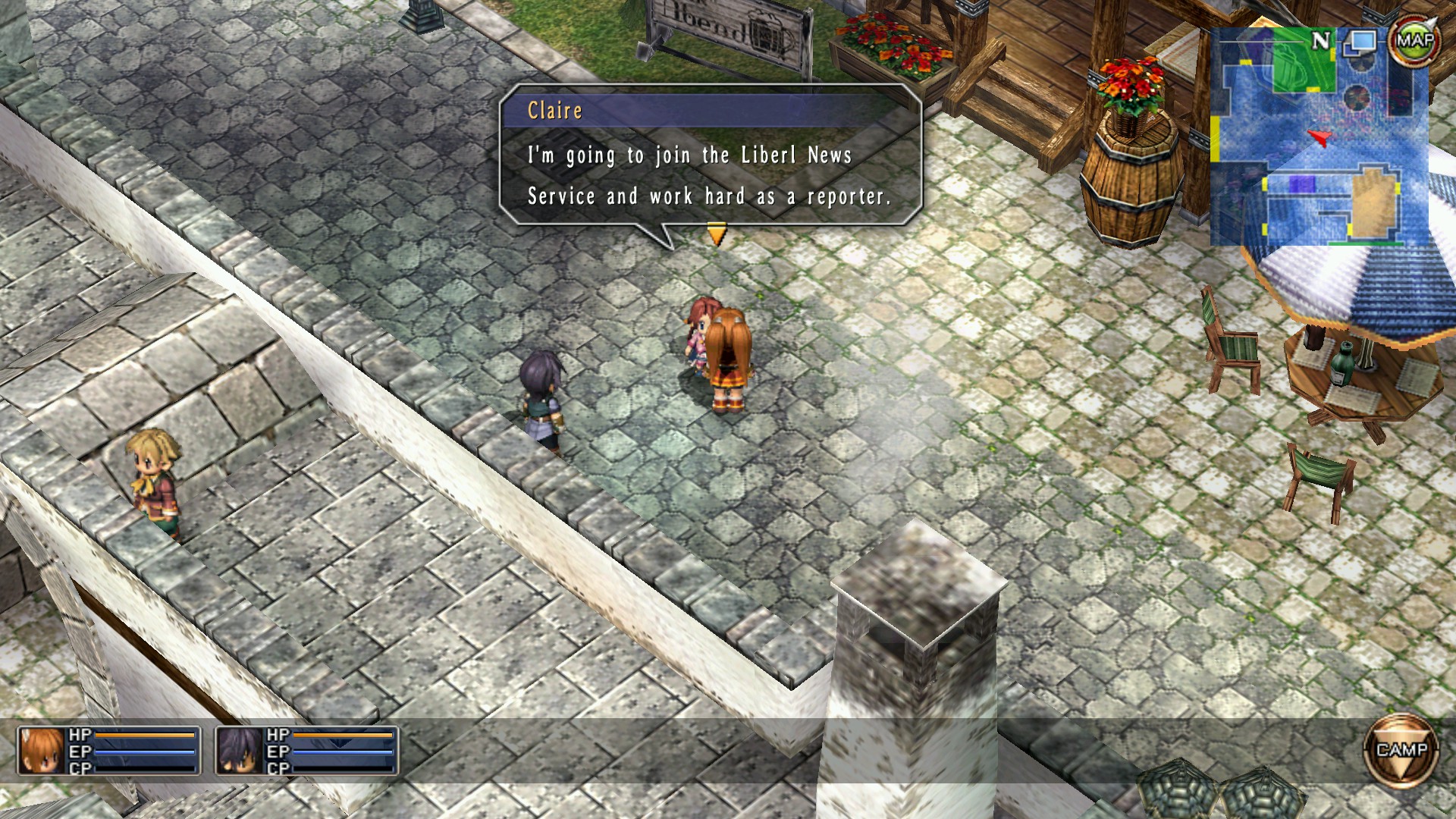 And those are just b-plots. If you pay attention and talk to everyone, you’ll hear about a valuable crystal which you eventually have to deliver to the mayor, as well as the notorious group of bandits who later swoop in and try to steal it. If you’re observant, you’ll even spot the bandits hanging around town casing the joint. Even in Western RPGs with supposedly “living” worlds, this kind of attention to detail is unprecedented. And it carries throughout the whole game! Across five separate regions and dozens of hours, you’ll encounter countless unique individuals, each with their own agenda. Sometimes you’ll run into people you’ve met in previous towns because hey, what sense does it make that your party are the only people travelling in the entire country? This is one of the most complete and believable worlds in any game.

And of course, the player characters are all captivating in their own way. Estelle is a very atypical female protagonist. She loves roaming the wilderness and beating things up, but though she’s often called boyish, she has a very prominent feminine side as well. She’s also kind of dumb, in a mostly endearing way. Joshua is the very embodiment of brooding JRPG angst, but the rest of the party, Estelle especially, have very little patience for his mopey nonsense, and frequently force him to smile despite himself. Not only is their budding “will-they/won’t-they” romance charming (“it’s okay, they’re not related” is a widely accepted excuse in japan), the friction between their personalities cleverly reflects the divide between old and new-school JRPGs heroes. Joshua is a student of the Cloud Strife school of whiney “badassery,” while Estelle’s bright-eyed enthusiasm harkens back to the earlier, more cheerful games that took inspiration from Miyazaki’s Laputa: Castle in the Sky. 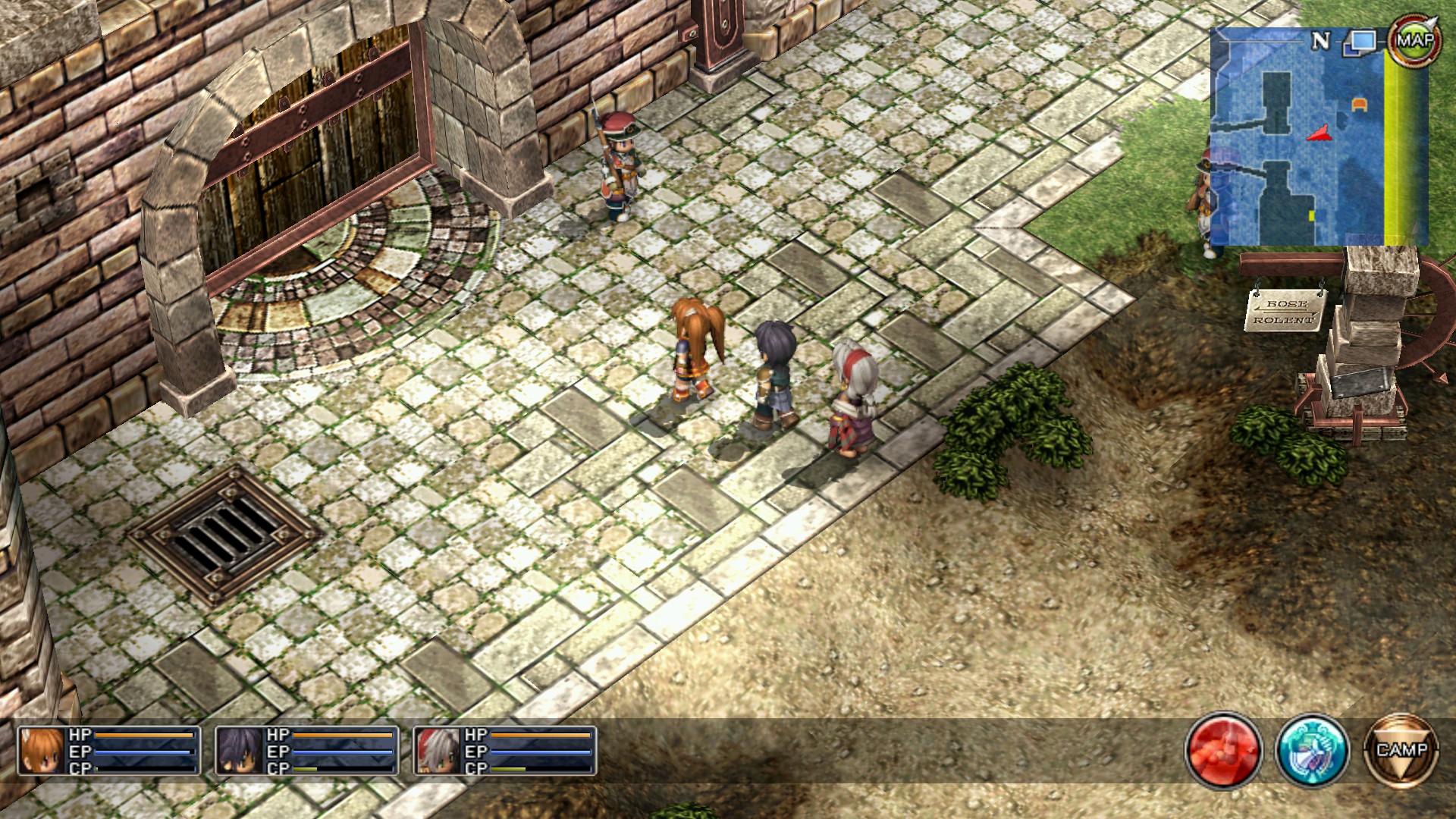 Laputa is among the most influential anime in Japanese history, especially when it comes to JRPGs. The character archetypes rooted in that movie – the boisterous hero with wild dreams, the mysterious heroine who appears out of nowhere, the cheerful gang of roving sky pirates – have echoed throughout the ages in Japanese film, TV, and games. Skies of Arcadia, Mega Man Legends, and Steambot Chronicles (my favourite game of all time) were all inspired by that seminal work, and I doubt the beloved Team Rocket trio from the Pokemon anime would exist if not for Dola’s pirates. More than any work this side of Nadia and the Secret of Blue Water, Trails in the Sky wears that inspiration on its sleeve. Much of the principle cast feel like gender-blended versions of Miyazaki’s archetypes (Estelle’s design is practically a straight cross between Sheeta and Pazu), and the game shares his obsession with steampunk aesthetics and flight. The influence is perhaps most obvious in Trails’ main theme “Whereabouts of Light,” which lifts its core melody almost directly from Laputa’s theme song.

Trails in the Sky feels more open than your average JRPG in terms of its story and quest design, and the combat system follows that design philosophy as well. Battles take place on a large tactical grid, and characters can only move across a set number of squares each turn. Turns are laid out on a timeline to the left of the screen, and the wait time for each combatant changes based on their previous turn and their speed stat. Instead of rolling critical hits and other buffs randomly, those effects are applied on set turns. With careful manipulation, you can stall the enemy from getting critical hits or being healed while simultaneously beefing up your own party. 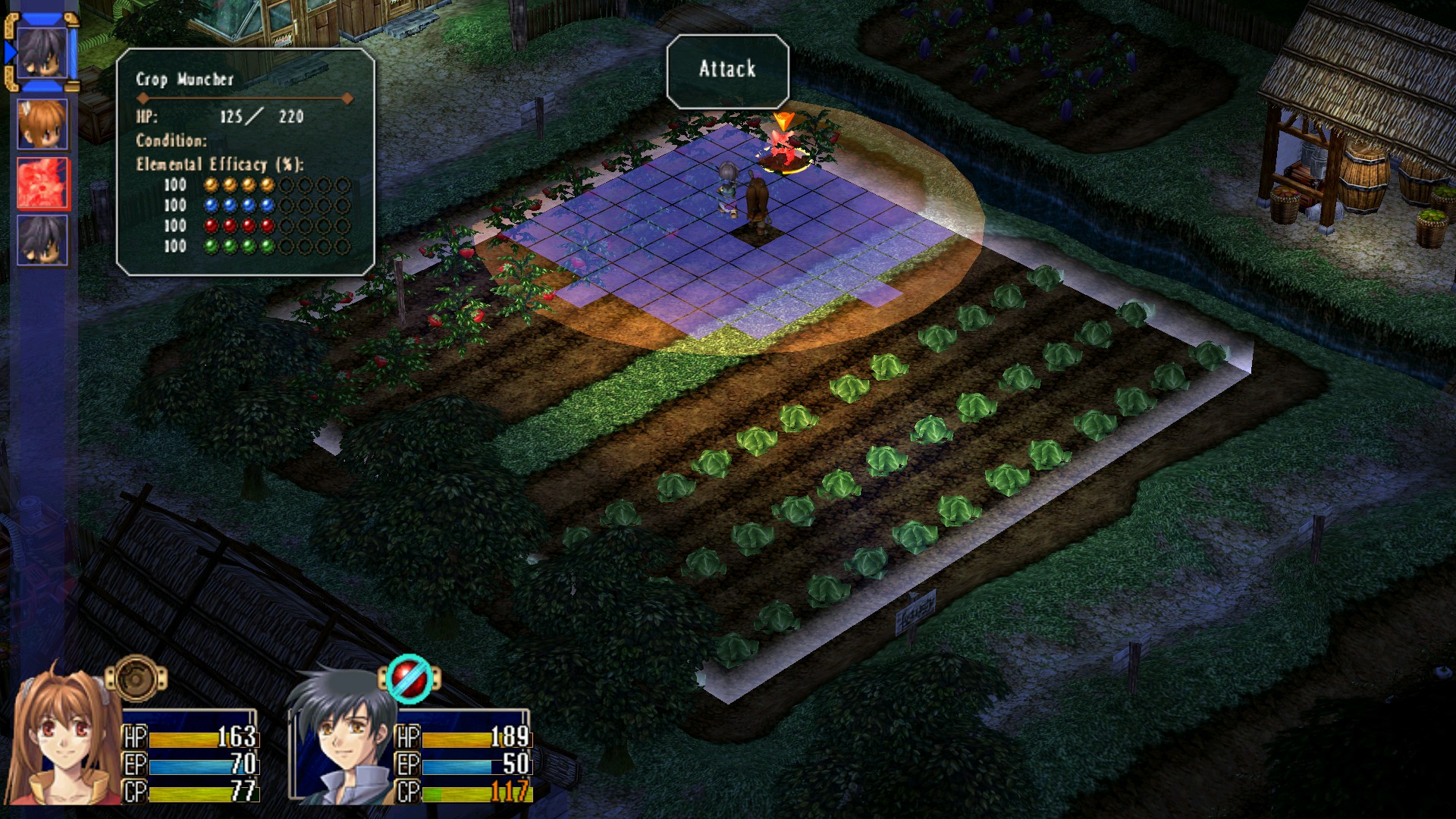 In addition to basic attacks, each character can make use of Arts and Crafts. Crafts are special abilities, unique to each character, which are fueled by a meter that builds as you deal out and take damage. When the meter is full you can unleash a super move at any time, interrupting an enemy turn in the process. Arts are powerful spells with a delayed cast time that shuffles your characters down the turn queue.  Rather than being fixed to a specific character, your spell loadout is determined by the arrangement of your Orbment.

Orbment is a character customization system that borrows elements from FFVII’s materia and FFVIII’s draw mechanic. Each character has their own battle Orbment, a magic watch of sorts that enhances their abilities. These devices can be augmented with crystaline circuits, called Quartz, which are made from a material called Sepith that you gather by defeating monsters. Quartz and Sepith are divided into various elemental categories that change their effects. On a base level, water Quartz might give you more HP, while fire Quartz might boost your strength. Additionally, when the elemental quality of your collective Quartz exceeds certain thresholds, you gain access to more powerful spells of that element. Sepith can also be spent to increase the number of slots in which you can equip Quartz, and thus your potential spell power. 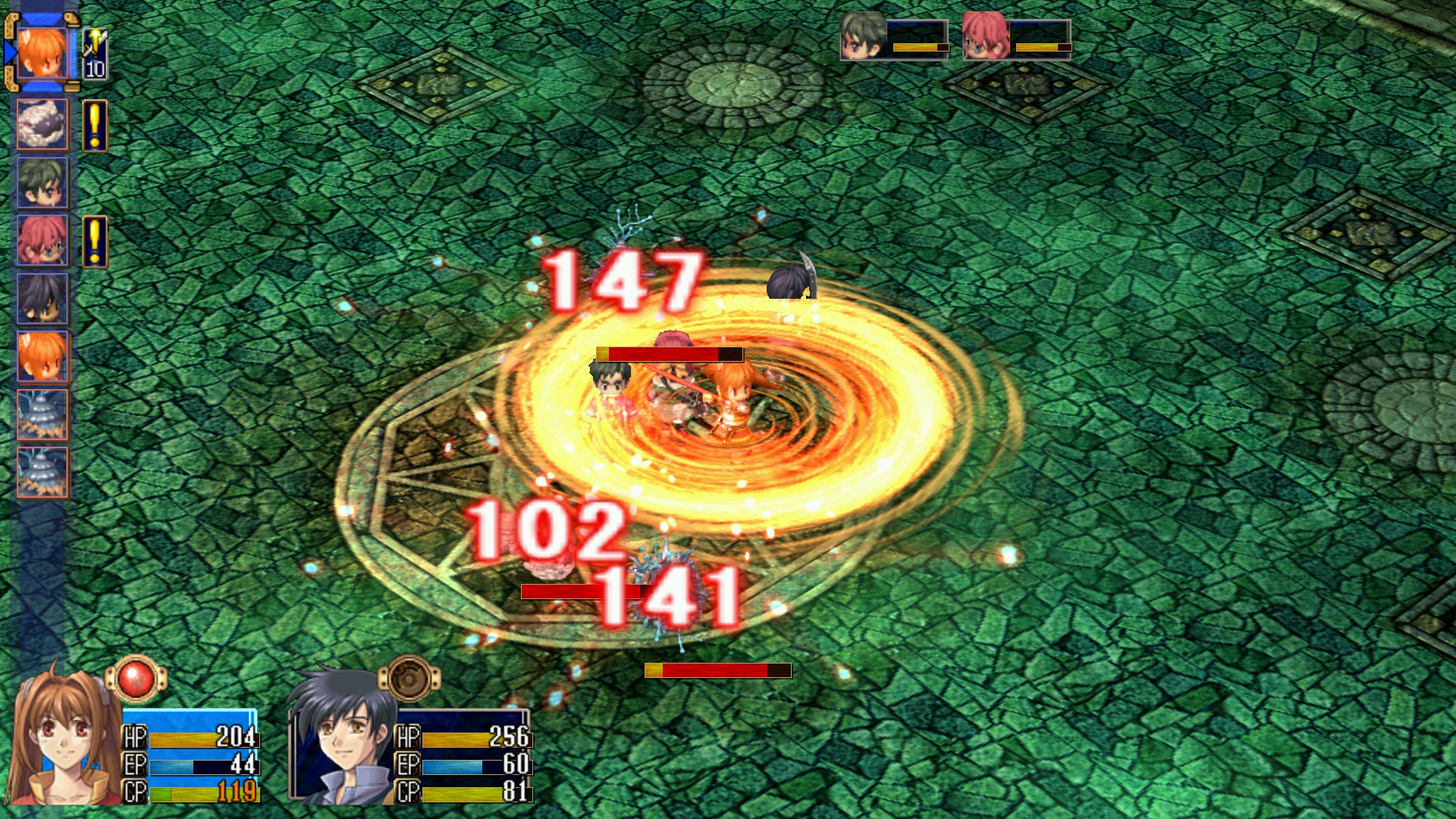 Put together these mechanics offer a wealth of strategic depth both in and out of battle. But while Trails is more open than your average JRPG, it doesn’t abandon the medium’s inherent strengths. More linear character progression allows for characters’ personalities to be defined mechanically, and with fixed Crafts and base stats that certainly comes across here. It’s nice to be able to wander around doing side quests, but Trails goes to great lengths to ensure that they don’t feel like diversions from the main story. In fact, everything ties together so nicely that every side quest feels like it advances the plot. The way Trails captures the tight pacing of linear narratives while still allowing you to run off the rails is truly impressive.

I wish that I could say that this PC port is as amazing as Trails’ PSP version from 2011, but several technical hiccups hold it back. The original PC version of Trails was hard-coded to run in 4:3 resolutions, so XSEED had to fiddle around with its code to make it run in 1080p, and change out its bitmap fonts for something higher-res. All of these modifications make the game terribly unstable, and unless you play in sub-HD resolutions or disable high-res fonts in the configuration tool, you’re likely to run into crash bugs every 10 minutes. The nice thing about PC gaming is that you do have these options, so while it might not look as pretty as it could, you will be able to get the game to work. Unfortunately, playing in 16:9 resolutions also reveals holes in the intricately crafted world of Liberl, such as unsightly black voids toward the edge of certain areas or background images that the original artists thought would never be seen. 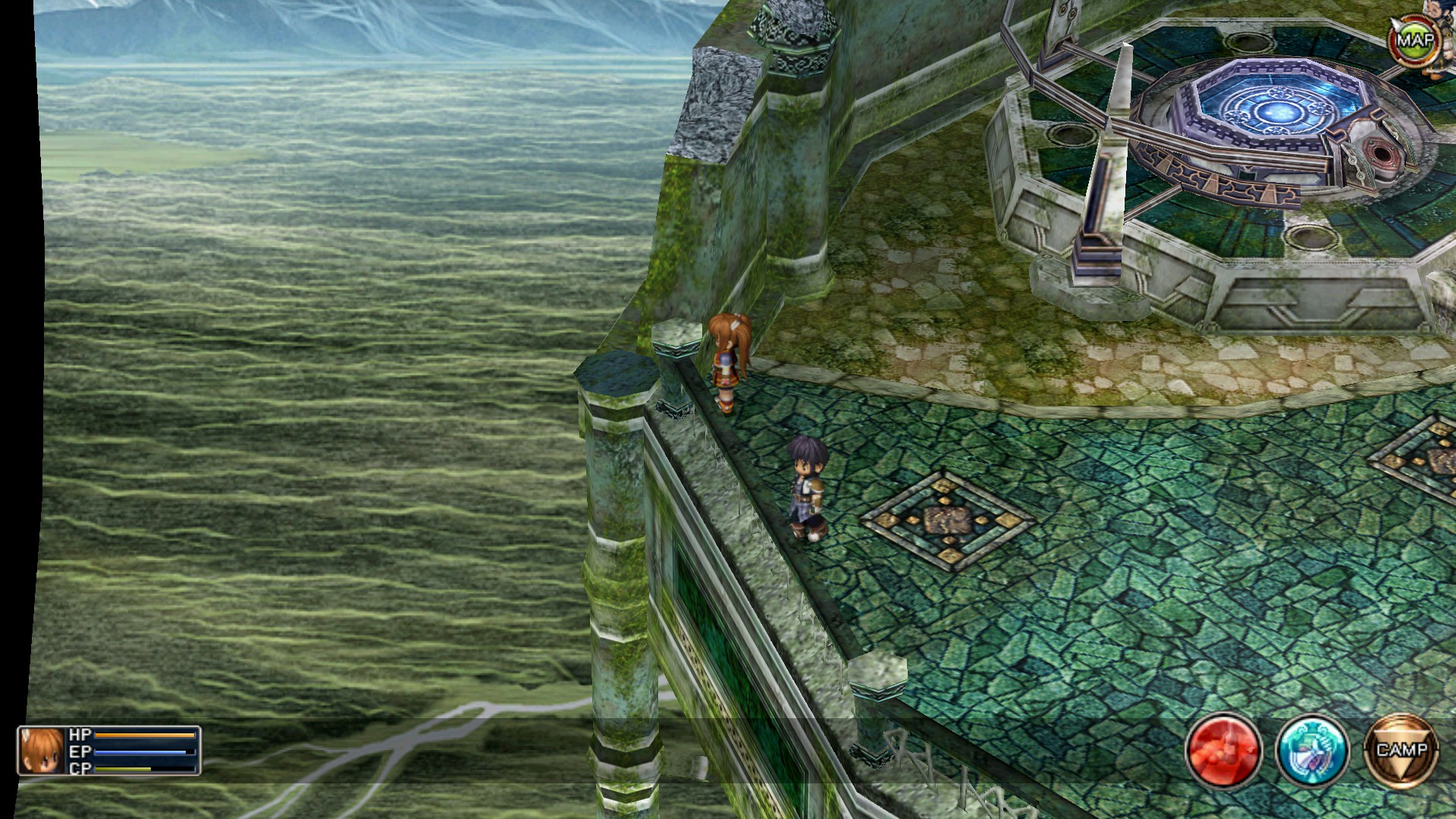 Legend of Heroes: Trails in the Sky is one of the finest JRPGs in the history of the genre, and that still holds true for its Steam debut. Even as it revels in nostalgia for its forebears, it forges ahead on its own path. Trails offers a thrilling adventure through one of the most complete and enthralling worlds ever rendered, and lets you take it alongside a cast of charming, affable heroes. Anyone looking for their RPG fix, be they fans of western or eastern design, will fall in love within seconds.