It seems like just yesterday that strategy guides were the “in” thing. But, as the years as pushed on, and the digital age came to fruition, the world of companion books sort of went to the wayside. We won’t say that they have died outright, but with the exorbitant amounts of free information available to anyone with an Internet connection, there just doesn’t seem to be that big of a need for such books right now. (Really, at this point the guide industry has almost become a boutique market.) Nevertheless, that hasn’t stopped certain publications from pumping out some releases for the more notable games.

Hyrule Warriors will undoubtedly be one of Wii U’s biggest titles this fall. It has the marketing-machine behind it, and Nintendo has done well in doling out bits of information at a tantalizing, but satisfying pace. Knowing the significance of such a release, then, Prima Games made sure to get in on the hype. Today, the renowned publication revealed the cover art for their forthcoming Hyrule Warriors strategy guide. Moreover, they also unveiled various details concerning the book’s innards. According to Prima, the guide will be loaded with ame strategies, maps as well as bonus content. Over 70 pages of art will also be featured, in addition to interviews with the development team. This definitely seems to be where the guide market is heading, offering up more exclusive content to get buyers in the proverbial door, hence this release seems to be a full-bodied one.

The hardcover guide will launch alongside the game on September 26. Head on over to Amazon to pre-order the beaut. 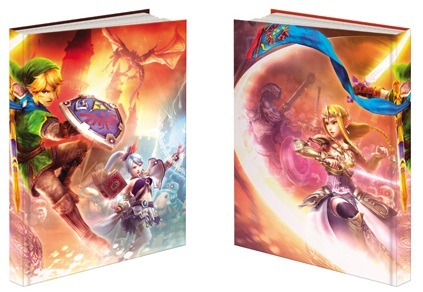