It’s always sad to look at a game and see an appealing style applied to fast-paced arcade FPS action, only to find that it’s just not any fun at all.  Lovely Planet is a speed-run FPS set on floating platforms decorated in a whimsical style using flat-shaded polygons for a Katamari Damacy-style look, and its upbeat music plus pleasantly bizarre scenario makes it an instant charmer.  Then the speed run aspect kicks in, killing you dead if you slow down anywhere the game decides you shouldn’t, and the constant endless prodding artificially rushes you into making the next mistake.  Why learn a level by observation and hone your skills on it with voluntary practice when Lovely Planet can kill you dead and force a level restart instead?  The progression from fun to “ooh, tricky!” to annoying to “What the hell is wrong with this thing!?” to quitting out is gradual, but almost inevitable.

Lovely Planet is a pure arcade FPS focusing on speed and accuracy, with no plot but rather a series of micro-levels that only take a few seconds to clear when done properly.  Death is quick and a single hit sets you back to level’s beginning, but it’s an instantaneous transition so the loss isn’t initially that bad.  Repeat ten times in a row and it gets old fast, however, and around the middle of world two it’s easy to see that many attempts or more at running the level’s gauntlet.  Get hit by a bullet, fall off the world, or touch anything red and it’s an instant restart, but eventually rote memorization will see you through to reaching the flagpole at level’s end. 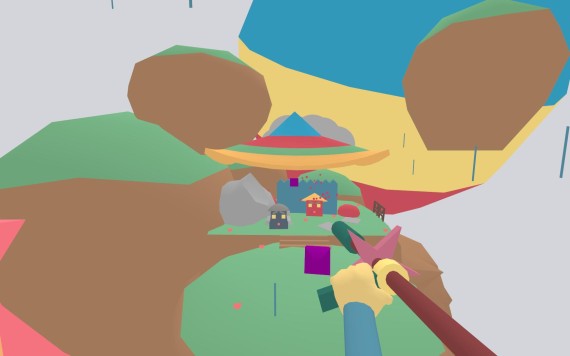 There are a couple of factors making this harder, however.  First off, you don’t have an aiming reticle.  This is actually one of the more interesting design decisions in Lovely Planet, honestly, and a bit of practice will see you making shots without even thinking about it.  Bullets take time to fly across the level, so timing is important, but it doesn’t take long before lining up a shot becomes almost instinctual.  It’s a good mechanic that would have been better used in a game less about speed and accuracy.

You can earn up to three stars on beating  a level in Lovely Planet, and while you don’t have to earn them all on a single run it seems silly not to take the endless repetition of die/restart as an opportunity to practice.  The first star is for killing all the enemies, and you haven’t actually beaten the level until you’ve earned this one.  Star number two is for beating a predetermined level-clear speed, and star the third is for accuracy.  As in, 100% accuracy.  Waste a single shot and that star isn’t happening.  What this means is that, while the magic star-wand you wield in your cartoon-gloved hand can fire as fast as you can click the mouse button, most of the time you’ll be rationing out the shots one by one with utmost care.  Miss a shot and, while it’s still possible to beat the level, the knowledge that Lovely Planet thinks less of you makes victory feel far less victorious.  The lack of aiming reticle plus speed-running plus an accuracy grade makes for a frustrating combination, and it doesn’t help that the game is constantly pushing you forward.

The first few levels are easy enough, getting you up to speed with Lovely Planet‘s style, but then come the apples.  Most enemies just sit there, some firing while others being little more than a target or a hazard you don’t want to touch, but the apples are different.  The apples pop into the air when you get within range, and while they aren’t a threat in the same way getting shot by one of the square red guys would be they’re actually more dangerous.  If you don’t shoot the apple out of the air than when it hits the ground it counts as level failure and an instant restart.  It doesn’t take long for Lovely Planet to chain apples together, so by the time you get in range to shoot the first the next has popped.  Later levels replace them with different devices like electrodes that you need to get out of range before they go off, and while it’s nice not to have to calculate their arc to shoot them out of the air, there’s enemies firing homing bullets and creeping red slimes to deal with by then.  It’s not enough to know the clock is ticking and any missed shot counts against you, Lovely Planet needs to be constantly pushing as well.  That doesn’t stay fun for long. 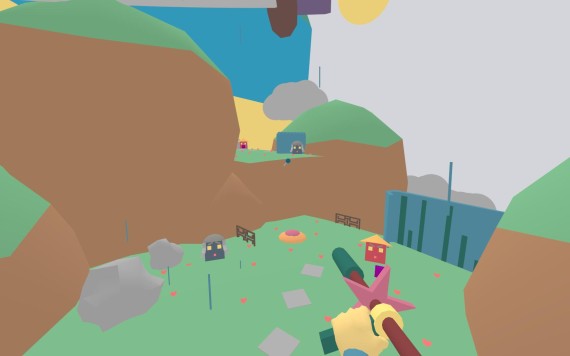 Lovely Planet looks great on paper.  Flat-shaded polygons, whimsical level structure, dozens and dozens of challenging little levels and a fun sountrack should have made for a great round of enjoyably strange FPS action.  In practice, however, it combines its good ideas in ways that leech the joy out of the action.  Be precise!  Be fast!  Don’t stop here or you’re dead!  Hit that target or restart the level!  Eventually it stops being a game and becomes an endless stream of nagging.  There’s a lot to enjoy in Lovely Planet, so long as you don’t actually have to play the game.