Considering Call of Duty is a yearly franchise, the title of this article may seem strange. Developer Sledgehammer Games, however, was given nearly three years to build the experience from the ground up on the latest console generation. In the meantime, we had two surprisingly good entries in Black Ops II and Ghosts, but Advanced Warfare must not be looked at like Call of Duty 2014. Instead, this is a carefully planned shooter that in a year full of new genre IPs — Destiny and Titanfall — wants to reign supreme. We had a chance to speak with Sledgehammer head Michael Condrey and Glen Schofield about their follow-up to Modern Warfare 3, as well as get our hands on the first taste of its multiplayer.

In the aforementioned three year development cycle, Sledgehammer focused on one thing: revolutionizing Call of Duty’s multiplayer. To accomplish this, they listened to fans and critics about what makes a Call of Duty work, culling the most successful features of previous games while excising the duds and adding an impressive amount of new features. After all, the added year of development gave them time to challenge themselves creatively and take chances. It was clear from the moment it debuted that Advanced Warfare is no normal Call of Duty. And that starts with the exoskeleton. 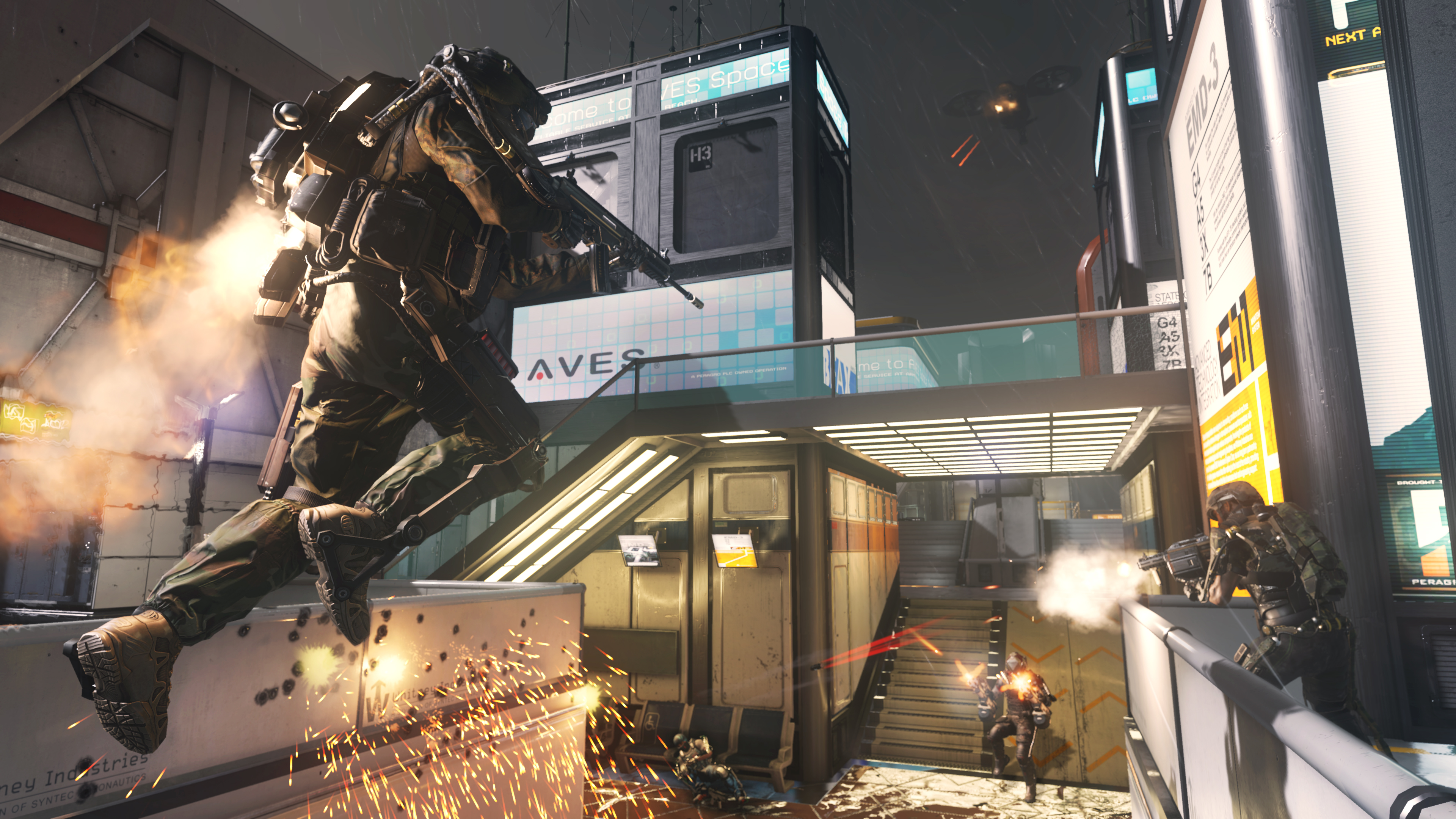 The exo brings a new dimension of gameplay, with the added speed, strength and agility transforming the experience and making it all about boosting (in a good way, of course). The exo sees the addition of Boost Jump, Boost Slide, Boost Dodge and Boost Slam. Boost Jump makes higher platforms easily reachable and adds verticality to the proceedings. Boost Dash provides mid-air evasive maneuverability, while Boost Slam is an all new air-to-ground melee attack.

But what good is having an exoskeleton and no power to back it with? That’s where customization comes in. Advanced Warfare features a brand new reward system called Supply Drops. An enhanced loot system, Supply Drops will be awarded based on time played and in-game challenges and come in three rarities: Enlisted, Professional and elite. They’ll reward players with items including custom weapons, character gear and reinforcements. Weapons can be modified both functionally and cosmetically with ten custom options, delivering nearly 350 custom weapons from drops. Gear allows operators to be customized and are mainly aesthetic in nature. Reinforcements reward players with one-time-use items that are activated during the match at pre-determined intervals, including perks and low-level scorestreaks. Experienced fans needn’t worry, however, as the XP progression system still exists and will remain the backbone of the game. 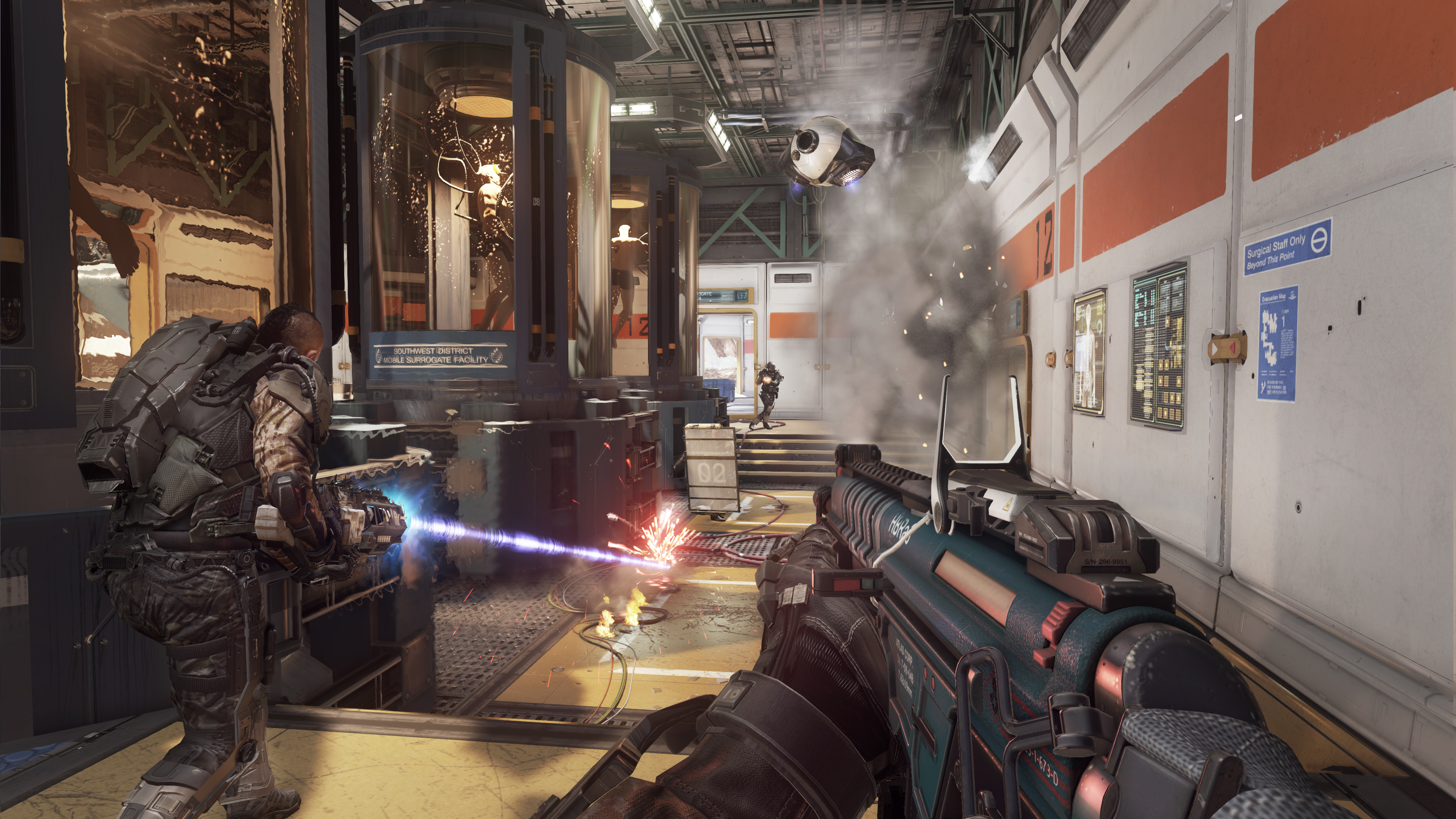 Advanced Warfare also features a new weapon class. The Heavy Weapons class includes directed energy weapons like the EM1 and EMPm2, using the power of weaponized energy to overcome enemies. While they don’t have to be reloaded, they will overheat with use.

Sledgehammer has also brought back two fan-favorites last seen in Black Ops II. The create-a-class Pick 10 format — now dubbed Pick 13 — returns and boasts more customizable options than before. Scorestreaks also make a triumphant return and players will be able to use Pick 13 to choose which are included with their class. Up to three scorestreaks can be used (or four with a wildcard) and can be customized to make them more powerful at a cost. In addition to customizable scorestreaks, Advanced Warfare introduces Co-Op Scorestreaks which allows two players to join up a score streak and work together.

Beyond Exo Abilities are Exo Perks. Perks could do things like suppress boost so it’s quieter and doesn’t reveal your location, allow players to reload while sprinting and shoot while sliding or grant more exo battery energy. 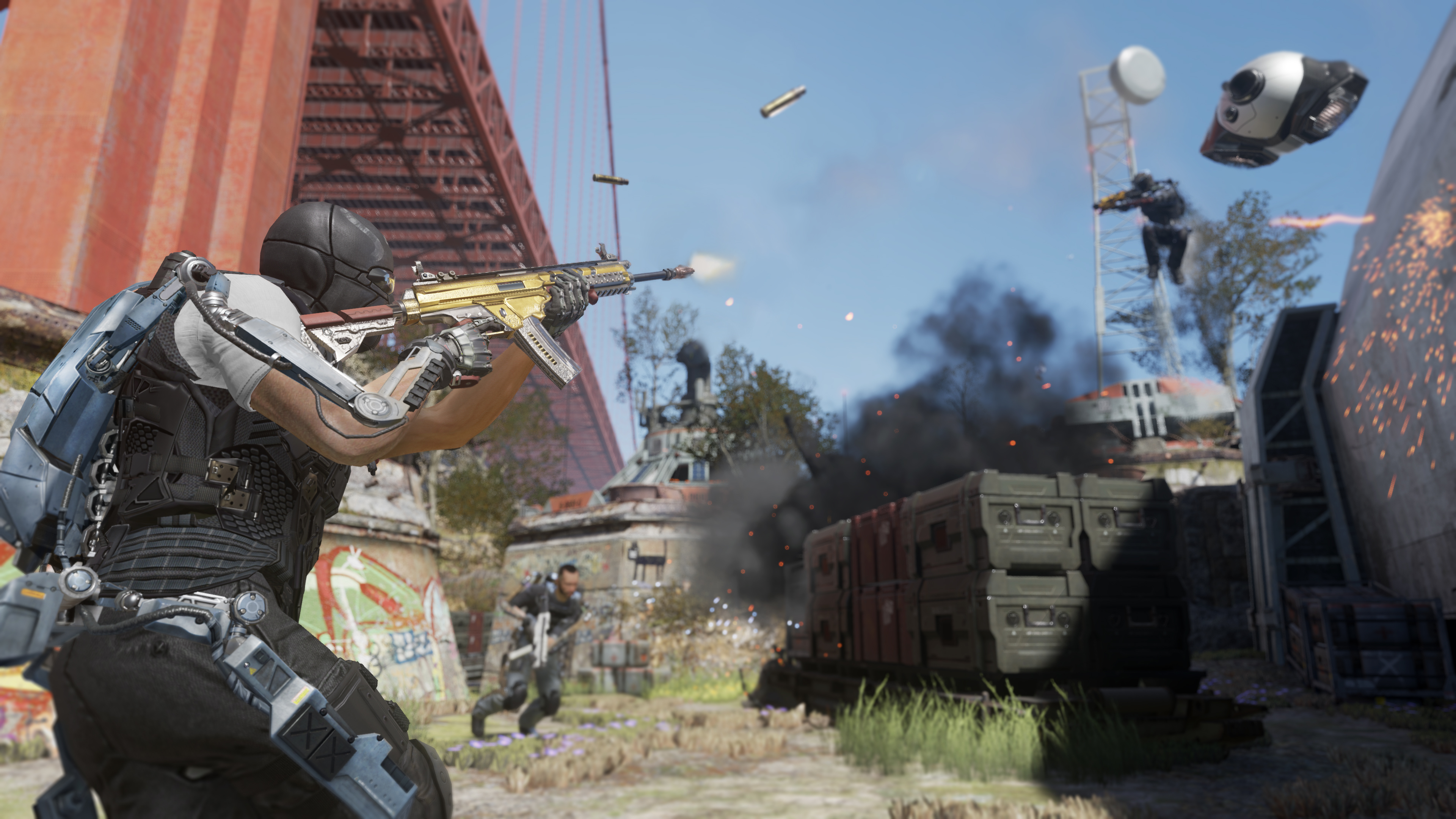 The lobby experience has been transformed in Advanced Warfare, allowing players to quickly see everyone’s character with their loadout, customization options, rare Supply Drop custom weapons and more. Additionally, players can now hop into the Virtual Firing Range in the lobby. The firing range lets players try out a new item or weapon with zero loading times and get a feel for how it works. It’s a great feature that gets rid of having to practice in a real game.

Twelve modes will be included in Advanced Warfare at launch, including Team Deathmatch, Capture the Flag, Hardpoint, Search & Destory, Kill Confirmed, Domination and Team Domination. Two new modes also make their debut. Reminiscent of Blitz in Ghosts, Uplink has teams fighting for control of a satellite drone, attempting to race to an opponent’s uplink when they have possession. Every Sledgehammer developer we spoke with seemed to have lost days of their life to the mode and that, from what little we played, seems like it could be the case with everybody. Momentum will also be joining the fray and is based on the War mode from World at War. The Call of Duty version of tug of war, five consecutive capture points exist on the map but only one ias active at a time, The more kills and captures a team gets, the faster additional points can be captured. Once the other team captures on you, the momentum meter gets reset, forcing players to be at their best the entire game. 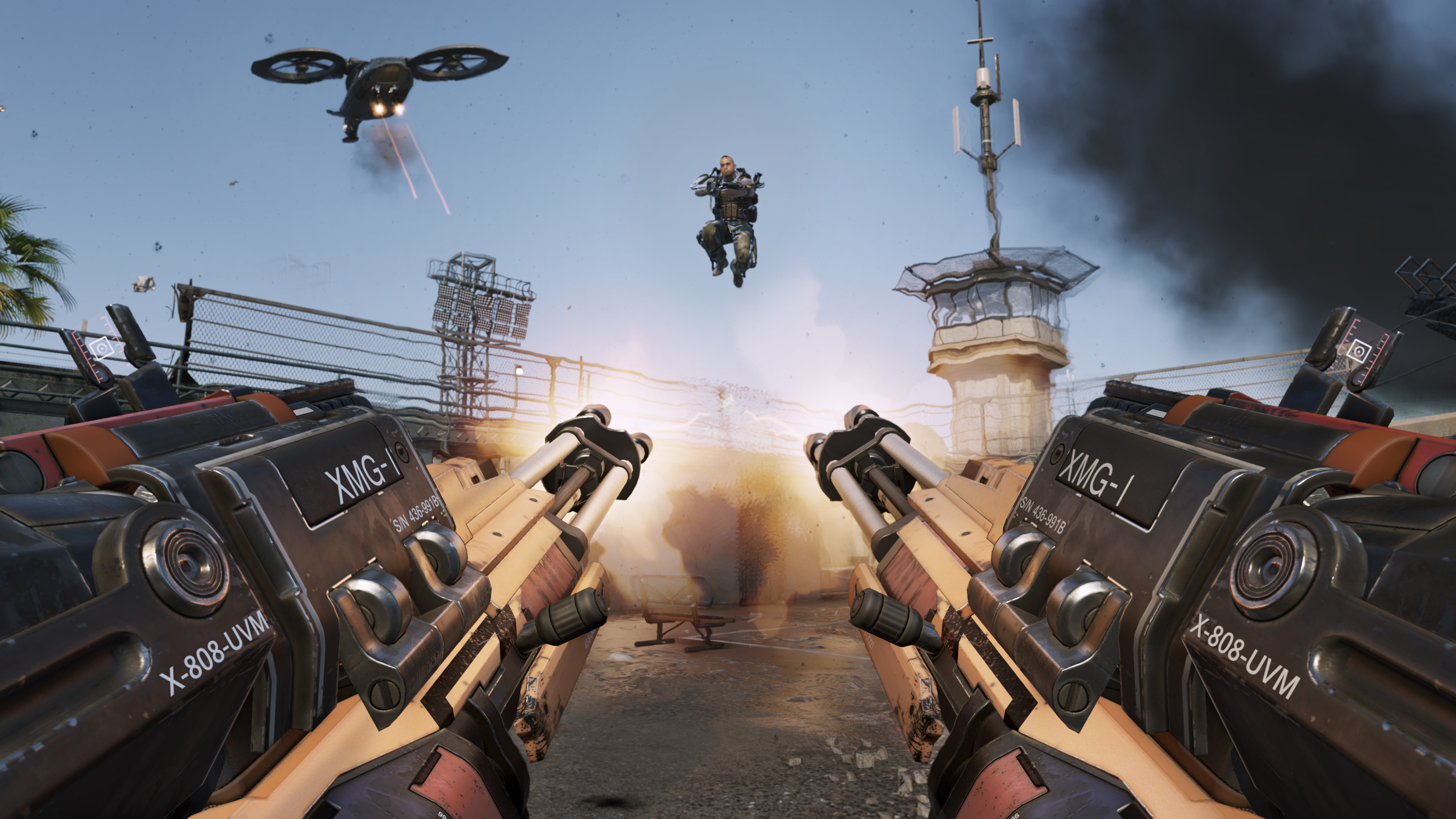 We had a chance to test drive four of the new maps: Biolab, Riot, Ascend and Defender. Part of a snowy secret base, Biolab features close quarters indoor combat and long range outdoor terrain, chock-fill of verticality. Riot is set in a bombed out prison, complete with active defense mechanisms, after a massive riot has taken place. Crafted with a 3-lane approach, the map features two large open areas on both side of the maps and a cell block in the center. Also using the 3-lane format, Ascend takes place in a futuristic space elevator terminal and features a map-based score streak that allows players to utilize turret defenses. Finally, Defender (our personal favorite) takes place in an abandoned bunker on a beach under the Golden Gate Bridge. The neat thing about this map is the tsunami that rolls in during the match and changes the map. Although just a small taste of the final experience, all four maps were a enjoyable and felt distinct from one another.

With Advanced Warfare, it’s clear that Activision isn’t taking any chances with the hit series. While it doesn’t drastically deviate from the tried and true formula, enough new tweaks and features make it feel fresh. This looks to be a deep Call of Duty experience that players can easily sink hundreds of hours into. Even with just four maps on display, it was hard to pull ourselves away from the chaos and it’s exciting to think what else Sledgehammer will have in store for us come November 4.