A three-block tetronimo is as useless as an overly-colorful metaphor on a web site that tries to remain at least a little family friendly.  It’s not going to fill in the space correctly, would be viewed as a really weird glitch in the game, and last we checked there’s no Island of Misfit Tetris Pieces for it to go.  So what’s a three-block piece to do when miscreated but resign itself to the grinder?  How about jump over the hopper and escape after teaming up with a single block caught in the same situation?  Tetropolis is the story of a defective tetronimo escaping the factory that created it in the kind of Metroidvania-style adventure that Tetris pieces don’t tend to find themselves in.  It also just landed on Kickstarter with the PAX East demo available for anyone to download and an updated version coming soon.

After joining up with the fourth block and creating a non-broken square piece, you roll (as best a square can) and jump through a few basic areas before unlocking the first ability.  Each Tetris shape will have a special skill, and the square can thump down in mid-air to activate switches, destroy sections of flooring, and squash enemies.  The other piece in the demo, the line, has a spring-jump, and while none of the demo’s puzzles require it you can chain abilities together by switching from one shape to another mid-air.  Current plans call for four shapes out of Tetris’ possible seven to be in the game, with the other two the demo doesn’t show off being the reverse-L and T while the poor regular-L and both S shapes gets sidelined. 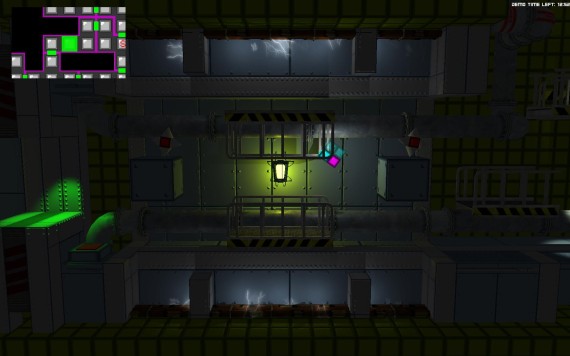 Well, mostly sidelined.  They show up in the map screen, which is the Tetropolis’ other really clever feature.  Each room in Tetropolis is Tetris-piece shaped, with small single-block sized control rooms off the main map area.  The control room lets you play with the room layout, twisting and reorganizing the level as you see fit, so long as the doors fit together properly.  You can even zoom in and examine the effects in real time as you spin the rooms about, watching the loose objects tumble and verifying that, yes, the platform layout is actually traversible.  The second area in the demo where you can do this shows off some fun usage in room layout, which takes a bit of experimentation to get right, as well as how it can be used for solving puzzles in the rooms themselves. 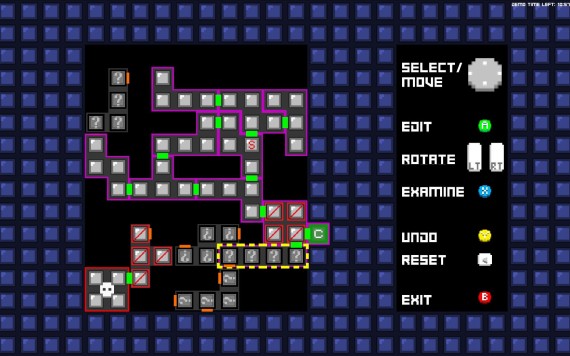 The green C block is the control room, orange doors don’t connect to anything, green doors are linked up properly.

The Tetropolis Kickstarter launched a few days ago on the 8th and, honestly, isn’t getting a lot of attention.  They’ve got a great demo that shows off the design potential and a good level of difficulty, however, so hopefully it will get the traction it deserves.  Tetropolis is looking like a clever, fun Metroidvania that brings a few unique ideas to the genre, and it really deserves to do better than the last -opolis game I was enthusiastic about.