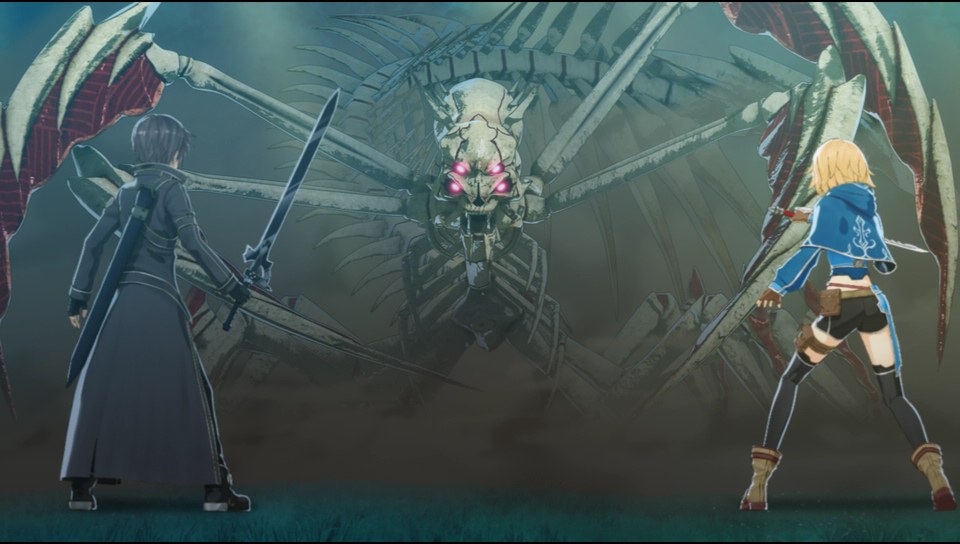 Of all the anime to attain mass popularity in the last few years, Sword Art Online is probably the worst. Say what you will about Attack on Titan, but at least that show has a personality. SAO’s basic premise – people getting trapped in an MMO – is so clichéd that Bandai Namco (publisher of the licensed game we’re talking about today) has made use of it in two different games (If you want to see the concept done right, check out Log Horizon). Initially, SAO differentiated itself with a dark pseudo-horror aesthetic, but that was quickly pushed to the wayside in favor of harem anime nonsense and tentacle rape. Yet somehow, despite being irredeemably awful, the show is strangely watchable (part of that may owe to the excellent animation and direction by superstar Sony division A-1 Pictures). The same cannot be said for this game.

Sword Art Online Hollow Fragment takes place in an alternate version of the SAO universe where Kirito defeats Heathcliff without dying and a subsequent glitch prevents the game’s players from logging out. With nothing else to do, they decide to clear the next 25 floors of the game and seek the exit, but along the way they’re beset by further glitches and become aware of a strange conspiracy. That might seem like gibberish to you if you haven’t seen the first half of the anime, but don’t worry, it makes even less sense if you know anything about SAO. See, the glitch also brings Kirito’s sister Suguha and his future gunkata teacher Shino into the game, dressed as their respective avatars from different games in later parts of the series (Alfheim Online and Gun Gale Online respectively). The trouble with this is that, canonically, Gun Gale didn’t exist before Kirito obtained The Seed from the digital remnant of Kayaba Akihiko, so Sinon wouldn’t exist yet and oh god, why do I know this and not calculus? Someone please kill me. 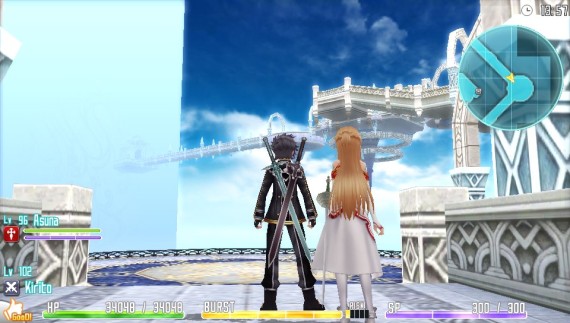 This thin plot basically exists to propagate fan service and allow popular characters from later arcs to bounce off each other. For the life of me though, I can’t imagine why anyone would want to see more of these characters. Kirito, the protagonist, is a Mary Sue to end all Mary Sues, a perfect paragon of author-insert wish fulfilment fantasy beyond reproach. At the tender age of 14, Kirito is 1) a Kendo expert 2) a genius computer hacker, and 3) the greatest, fastest video gamer to ever video game. To Kirito, all games are single-player, and no problem in this universe gets solved without his intervention. Kirito makes Superman look multifaceted. His only flaw is that he sometimes worries about not being flawed enough.

Shockingly, the rest of the cast is even worse. To a woman (for they are almost all women) the supporting characters of SAO are simpering, indistinct moeblobs whose only – and I do mean only – motivation is that they want Kirito’s dong. The expert blacksmith who managed to craft the finest sword in the world? Did it all for the “D”. The twelve year old girl with a cute pet dragon? She’d chase it to the ends of the earth. His goddamn sister? You better believe it. What’s more, you can unlock uncomfortably sexy CGI of all of them, even – no – especially the twelve year old and his sister. It’s absolutely ridiculous. And if you think I’m harping on this, you should know that around 90% of the cutscenes in this game focus exclusively on these various girls pursuing him. Sometimes it’s one at a time, sometimes all at once, and never, ever is it interesting or entertaining in the slightest. 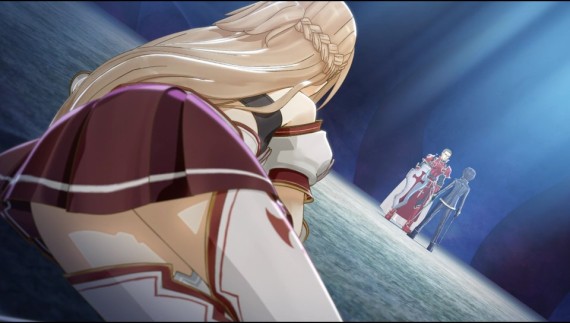 Though it does feature combat (which I’ll get to in a moment… it won’t take long), Hollow Fragment is in large part a visual novel, and a particularly awful one at that. As I’m sure you can imagine, with most of the scenes devoted to “wacky” hijinks, the plot moves at a snail’s pace, but even if it were good, you wouldn’t know from Bandai Namco’s translation. It’s not just that they’ve done a bad job translating it, it’s that they haven’t done anything resembling a job at all. Hollow Fragment reads like a Nigerian prince scam, riddled with broken English and typographical errors. If they’d put the game script through google translate the results would be more coherent than what’s here. That sort of thing is understandable (though not actually, you know, understandable) in an independent game like Rainblood Chronicles: Mirage, but a big publisher like Bandai Namco has no excuse selling work this sloppy. Even if it were well-translated, though, nobody ever needs to read a chapter’s worth of dialogue about a bunch of girls eating bison steak and fawning over a guy.

When you’re not reading the awful, awful dialogue, you’ll be reading something else while the battles finish. I wish I was kidding about that, but by and large Hollow Fragment plays itself. The game makes use of an auto-combat system straight out of an MMO (despite SAO in the anime being based solely around skill and reflexes), and while that’s not an inherently awful idea for a single-player JRPG (Xenoblade Chronicles made masterful use of such mechanics), here it’s done about as poorly as anyone could possibly do it. Kirito starts off so ridiculously over-leveled that most early enemies can’t even hit him, so you can literally leave your Vita on the ground and go do something else while he fights. You could use break attacks (which allow you to trigger auto-attacks at any time with the circle button) and special moves to make the battles move faster, but you don’t need to, and in fact some of the special attacks have such ridiculously overwrought animations that it’s faster not to use them. Also, Kirito comes into battle with a companion who deals damage on their own, making the fights even easier. 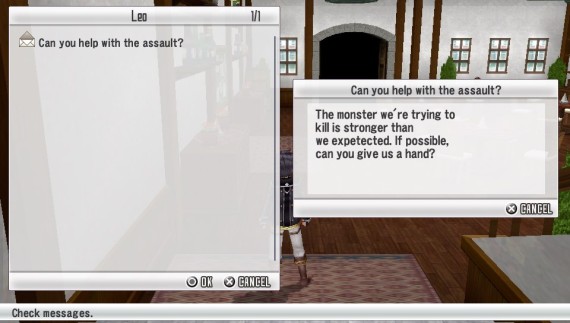 The only time when you’ll need anything resembling a strategy is in boss fights, and even then I use the term loosely. For the most part, all you’ll need to do is trigger specials whenever you have enough SP to whittle down the boss’s health, though you might also need to cast buffs and healing spells to deal with effects like poison. It’s still almost entirely a numbers game though, so if the boss has bigger numbers than yours your only option is to go level up or come back with a higher-level companion.

Should you choose to adjust your numbers, you’ll find yourself staring at an incomprehensible skill tree that’s packed with virtually identical options. One of the few things I really liked about the anime was the elegant design of its VR interface, so it’s nice to see that Bandai Namco have completely screwed that up in turning it into an actual game. The only thing worse than navigating the menus is staring at the battle screen, which is absolutely cluttered with icons and prompts. I commend the attempt to emulate the chaotic interface of a real MMO, but it doesn’t work very well on a small screen. 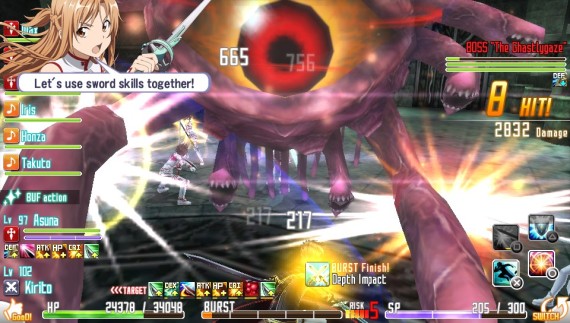 The game also perfectly emulates your average MMO camera, which is either zoomed in too close or zoomed out too far. The best part is that zooming is mapped to the back touch pad, meaning that in the process of holding your Vita normally you will likely end up zooming in so close as to lose sight of your character. It should be noted that this is the game’s sole useful touch input. That means you must navigate a largely icon and menu-based interface using only the buttons and analog nubs. The team that developed this game aren’t exactly masters of interface design.

It’s only at floor bosses that things get remotely interesting – another term I’m using loosely – because you have to fight them with a larger party. These NPCs don’t actually seem to contribute anything to the fight (their damage output is negligible), but they can die. The only challenge in the game comes from trying to keep them alive, which is especially challenging when your partner’s character portrait is pasted over their health bars and you can’t keep track of their stats. It’s also possible for your partner to die, at which point you get a game-over just the same as you would if Kirito bit it. This means that the entire game is, effectively, a giant escort quest. The PSP version of this game was called “Infinity Moment,” and I can’t think of a more perfect description of how it feels to play it without invoking Purgatory. 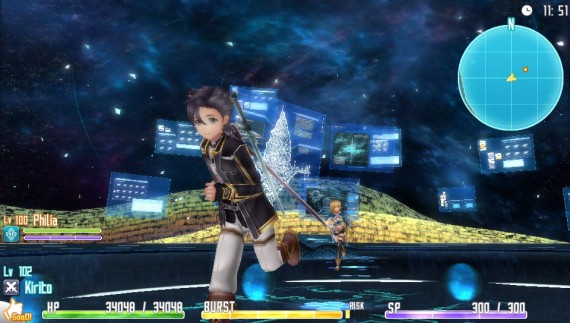 For its Vita incarnation, Hollow Fragment adds an additional layer of nonsensical retcons and tedious grinding to the mix. At any time players can take a break from their main quest to explore the Hollow Area, a secret zone within Sword Art Online that only Kirito can access because he’s the most specialest protagonist there ever was. The Hollow Area contains special gear that ostensibly makes it easier to progress through the main story, though since the primary obstacle there is making it through the cutscenes it doesn’t actually help much. Optimists might say it’s nice of the developers to add what amounts to a second campaign’s worth of content, but it would be more accurate to say it’s cruel of them to subject you to it.

The only thing this game does right is capturing the look and sound of A-1 Pictures’ anime, which as I’ve said before is gorgeous. The blend of digital and fantasy elements is nothing short of artful, and blandly as the characters are written, they have outstanding, colorful designs. This is especially true of the slick pre-rendered cut scenes that punctuate the most important (and fanservicey) plot points. The sprites in the visual novel sections have very detailed animations as well. In-game, each piece of equipment you give to Kirito changes his appearance, which is always a nice touch in an RPG. The music, too, is an pleasant mix of orchestral and choral tracks and synth sounds. It may barely qualify as interactive, but Hollow Fragment makes an awfully nice screensaver for your Vita. 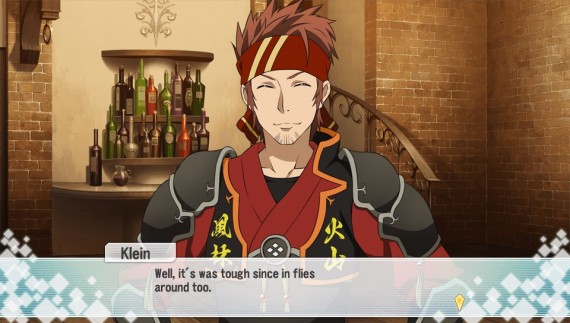 Sword Art Online: Hollow Fragment isn’t just a bad game. With its awful story, tedious combat, and inexcusable translation, it’s an out and out insult to anyone who might buy it – fans of the series especially. These are people who can put up with – and even enjoy – the most debased, pandering garbage Japan has to offer, but I have a hard time believing that even they could accept this rushed, broken, and imbecilic excuse for software.