There are few Role-Playing series more hardcore than The Witcher. CD Projekt Red’s dark fantasy franchise is built on an intricate web of moral choices supplemented by complex, challenging combat mechanics. The Witcher games are among the most daunting and engrossing RPGs out there. There are plenty of different mediums that the series could be adapted to, but I don’t know that it would ever occur to me to turn such a convoluted, story-driven property into a board game. Not even a digital one.

Yet CD Projekt and Fantasy Flight Games have done just that. The Witcher Adventure Game casts you in the role of one of four heroes from the series, and sets you loose on the Continent (The Witcher’s world has no official name) with a quest to complete. These quests come in the form of cards with flavour text and goals – most of which involve reaching a certain place with a certain number of resources. Completing quests earns you victory points – the more challenging, the more rewarding – and the game ends when a set number of quests are completed. Whichever player has the most victory points at that time wins.

Usually the player who completes the last quest will win the game because of how points are doled out, but this system prevents the game from being a straightforward race to the finish. Each quest has sub-goals worth additional victory points, so players who rush to the end as quickly as possible may find they come up short against more diligent opponents. Sub-goals can be completed by spending “leads,” but leads must also be gathered in sufficient quantities to become “proof,” the resource you spend to finish main quests. Progress might also not always go as planned – you might come up short against a monster, or draw a bad hand from the deck of foul fate. If you end up coming out of an encounter the worse for wear, you may find yourself with limited options on future turns.

Each player has six actions available to them, two of which may be taken each turn. They can rest, investigate, develop their character, use a special action, or travel in one of two ways. Normal travel allows you to make an uneventful journey to a neighboring region, while fast-travel lets you move much further at the cost of drawing a foul fate card. Investigating lets you gather different kinds of information – the resource used to complete quests – while developing grants your character a choice of new abilities to aid them. Resting lets you recover from wounds, which take the form of tokens that block you from using certain actions. 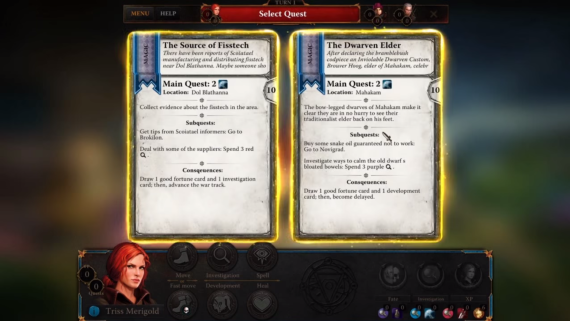 Special actions are unique to each character, and help to differentiate their play-styles. Geralt can brew potions that give him various advantages, Triss the sorceress can prepare powerful spells, Dandelion the Bard can busk to earn money, and Yarpen the dwarf can have two of his allies assist him in a variety of ways. Each character also converts leads into proof at different thresholds, which allows them to complete quests at different rates. You still end up pursuing the same basic goals no matter who you’re playing, but there’s enough variety to make each character feel distinct.

Combat in Witcher Adventure is an interesting affair based on dice-rolls, with a glyph-based outcome system not unlike Zombie Dice. You need to meet a certain threshold of swords to hit a creature (which usually nets you some sort of benefit) and a certain threshold of shields to block damage (which usually gives you a wound or some other sort of penalty if you fail). If the dice aren’t in your favor, you can use development cards to assist you in battle. These run on different resources depending on your character – Yarpen needs a comrade to sharpen his weapons, while Dandelion need only toss his friends a coin to earn their help in battle. 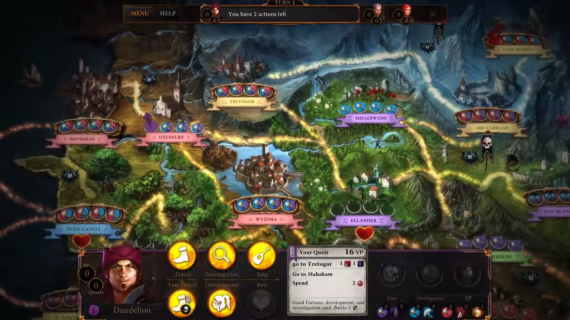 The game seems to have found a solid asymmetrical balance. No character is particularly stronger than any other when you get down to it, though one might better suit your specific playstyle. As with any game based on cards and dice, luck plays a huge role in determining your success, but you can mitigate that with careful planning. This balance might actually be the game’s biggest flaw – in my experience leads can snowball quickly with the right strategy, and it can be impossible for trailing players to catch up. A bit more chance would keep players on their toes, though that might not be an issue in bigger games. Unfortunately, I haven’t been able to play in any.

The Witcher Adventure Game’s beta isn’t just intended to test the game itself. Its primary purpose is to stress-test Good Old Games’ new Galaxy client, which allows GOG players to connect online without the DRM hassles of Origin and Steam. The service is surprisingly quick at finding random games, but not so fast when it comes to filling them. Once games begin, it’s not uncommon for players to disconnect immediately, and it’s unclear whether that’s due to poor attitudes or poor programming. The end result is that you run most games against only one or two other players. I imagine that the race for victory points becomes a lot tighter with four players scrambling around the board at once. I also imagine that would exacerbate the game’s other big problem.

Presently, when it’s not your turn, there’s basically nothing you can do but wait for other players to finish. Turns move fairly quickly – usually taking only a few minutes each – but with multiple characters you could find yourself waiting upwards of ten minutes between turns. While the music is nice and the game board is admittedly beautiful, it’s tough to enjoy them for such long stretches – even three minutes in a two-player game is a bit much. It would be nice if they had interactive toys on the board like Hearthstone to keep the wait from being too tedious. Another option would be to run turns simultaneously a’ la Civilization, though that might make it tough to keep track of what every player is doing.

The Witcher Adventure Game is a fun little board game with fantastic aesthetics and solid game design, but as a digital title it needs some work. Either connections need to be more stable, or there needs to be some sort of system in place to discourage quitting games early. The down-time between turns also needs to be made less inexorable or removed altogether. Still, if these changes can be made, it’ll make a solid addition to GOG’s library. If you’re lucky you can try the game out now by signing up for its closed beta.