In a video game landscape filled with shooters left and right, sometimes you just want to chill out. TRI is an upcoming puzzle adventure from Rising Star Games with a distinctly calm, mystical aesthetic that invites exploration. And somehow, unlike Myst and its many clones over the years, puzzles don’t descend into incredibly precise and confusing messes. So far, TRI seems to be doing everything right.

Being dropped into TRI’s world for the first time is itself quite the experience. The visuals are otherworldly, with buildings that exhibit unearthly architecture. All the colors feel subdued and within a certain palette. The soundtrack amplifies TRI’s unique identity with beautiful, sometimes eerie tunes. Even though there is an Asian inspiration to the architecture it’s easy to see this is no ordinary landscape. That’s when your guide appears to bring some context to everything – you’re in the spirit world! What’s your goal while on this ethereal vacation? It’s simply to find a fox god that loves leading others on a chase. 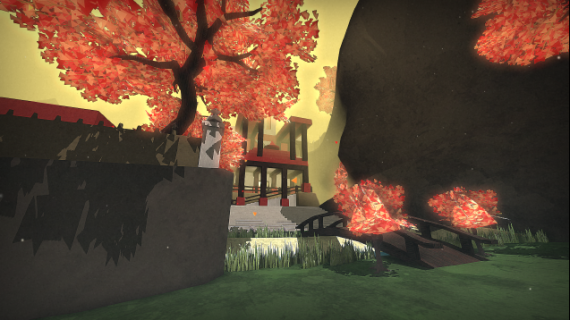 Puzzles are introduced in an incredibly friendly fashion. First, there’s not much you can even do other than explore. Slowly, integral puzzle functions are added and given enough time to learn them. The first big ability is making triangles. By pointing and clicking three times a triangle of varying size and shape appears in the world. Your goal is to make triangles as bridges, stairs, and other platforms to reach new areas. Some initial restrictions make steep triangles too difficult to climb. In an exciting twist, this rule is later revoked with new puzzle features.

Further progression reveals far more interesting, and sometimes head-spinning, puzzles. Once climbing on the walls is unlocked things really get wild. With that said, TRI isn’t focused on making a cruel puzzle or platforming experience. Players are typically given time to think through each challenge. With triangle creation at your disposal there’s also room for creative solutions to any problem. Beyond that, there are additional hidden collectibles on every stage. It’s fun to uncover each secret, although you only need to find three fox statues per level to continue. 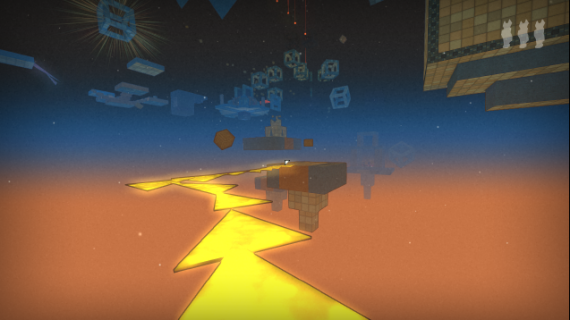 As of right now there are 12 levels in TRI. It’s not a massive amount, particularly once you realize many can be completed in under half an hour. Theoretically, a player could beat the game in anywhere from 6-10 hours. Just looking at it from that view ignores another aspect. At the end of every level you’re shown a tally of collectibles found as well as completion time, which seems to point to a speedrunning aspect of the game. There’s no leaderboard implementation at the moment, though.

Rat King suggests TRI will be ready for launch in September. Right now, it’s about 85% done, although it already feels like a finished product. The only problems experienced in my playthrough were a few instances that created triangles wouldn’t disappear. Hopefully most bugs will be cleaned up soon enough. Its strong visual/audio presence helps turn it from simply competent to uniquely enjoyable. Adventure and puzzle fans should definitely be looking forward to TRI’s impending launch.