On August 5th, UK development studio FuturLab made one of the boldest statements of the year when it claimed that Velocity 2X should be a Game of the Year winner. FuturLab noted that a Game of the Year winner should be “best-in-class for audio, graphics, gameplay quality & production value,” as well as claiming that it did things better than a large number of AAA titles. The boldest quote came late in the PlayStation Blog article:

Many of the really big games do one or two things really well, whereas Velocity 2X kicks ass at everything!

At the time, this seemed to be an arrogant statement from a developer that has created a number of awesome, but not transcendent titles. After all, on the surface Velocity 2X merely adds a dash of 2D platforming to the time-warping shoot-’em-up action of its predecessor, Velocity Ultra. Could this small British studio combine two completely different genres seamlessly? Would Velocity 2X rise to the ranks of the best downloadable titles on the PlayStation 4, or simply be forgotten almost instantly? How blasphemous would FuturLab’s Game of the Year claims look after this genre-bending shooter finally hits the market? 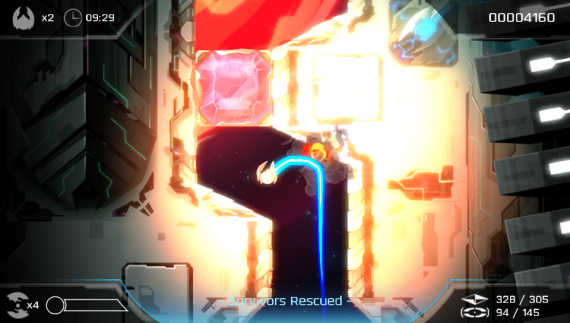 Players take the role of Lt. Kai Tana, a former test pilot with various cybernetic modifications. Velocity 2X‘s blonde protagonist has both a mechanic arm, capable of firing unlimited laser ammo, and a bio-mechanically reconstructed face. Throughout the quirky narrative, Lt. Kai Tana and Hjun Ralan III, a member of the peaceful Jintada species, attempt to locate the powerful Quarp Shield in order to send the player character back to Earth. Along the way, the war-mongering Vokh people, and their equally-evil leader, do their best to destroy everything that comes in their way. Velocity 2X certainly doesn’t have as high quality of a narrative as, say, The Last of Us, but it’s nice to see a bit of work put into contextualizing its superb gameplay. The gorgeous static cutscenes between each stage do a great job of making Velocity 2X a more unified experience than its predecessor, as well as add a layer of charm to the procedings.

As nice as it is to see a decent story, Velocity 2X‘s bread and butter is its frenetic gameplay. At first glance, its space flight segments might appear to be your standard shoot-’em-up fare. Players travel upwards, blasting enemies, switches, and glass while collecting dozens of light blue survivor pods. Things start to get a bit tricky once an exciting once a highly-responsive teleportation mechanic is added to the mix, allowing players to warp across barriers in an instant. If you’ve played Velocity Ultra, you’ll feel right at home here, as these flying segments feel like a faster, more responsive version of FuturLab’s last Velocity game. Those new to the series will find teleporting a bit foreign at first, but within minutes everything begins to feel natural. As the title suggests, Velocity 2X is all about moving as quickly as possible all while being as accurate as one can be. Your hands will sweat, your fingers will get sore, and your DualShock 4 just might lose all of its rubber, but my God is it worth it. 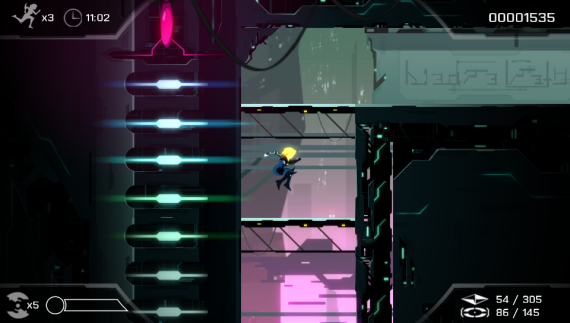 Even though it’s additive and exciting, we’ve seen this style of shoot-’em-up action before. After all, Velocity Ultra exists, so what’s so special about the sequel? Rather than standing pat and simply releasing fifty new levels of space-flight action, FuturLab decided to take one of the boldest steps we’ve seen in recent video game sequel history and attempted to combine two genres that seem completely unrelated. It’s an experiment that could have gone disgustingly wrong; how does one successfully amalgamate 2D platforming and top-down shooting? Through the clever use of speed, similar mechanics, and a unified control scheme, Velocity 2x manages to create one of the most exciting gameplay experiences of 2014.

Let’s ignore the excellent top-down shooting for just a minute; Velocity 2X boasts some of the best platforming action of 2014. When Lt. Kai Tana exits her signature Quarp Jet, the gameplay finds a way to change dramatically while staying completely the same. One of the biggest concerns about Velocity 2X was that, by combining platforming and top-down shooting, it would feel like two separate games rather than a unified experience. Because the control scheme is exactly the same in both segments, players never have to make major adjustments at the beginning of a transition. From warping through walls to moving at the speed of light, the platforming in Velocity 2X is top notch. There’s absolutely no floating when one is in the air, allowing for a tight, highly responsive experience. In an age with countless independently-developed platformers, it’s staggering to think that some of the best running and jumping gameplay takes place in the sequel to a top-down shooter. 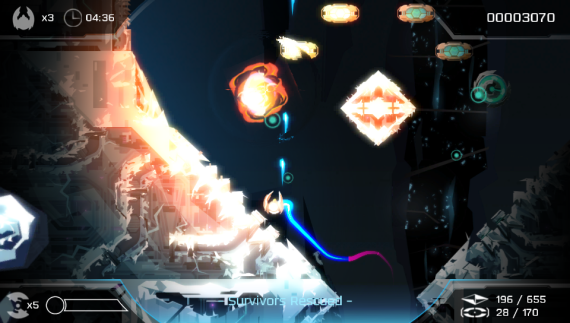 There’s something to be said for the disgusting level of replay value present in Velocity 2X. The combination of an instant restart and three medal levels for four different categories (time, survivor pods collected, Rekenium shards collected, and overall score) fuels an almost unparalleled drive for perfection. Sure, discovering the path through increasingly complicated stages is exciting, but Velocity 2X truly shines when players are racing through a given level as quickly and precisely as possible. It’s entirely possible to spend hours chasing an elusive “Perfect” certification on a given stage, as getting all four gold medals without dying requires quick wits and even quicker digits. Once players get the hold of Velocity 2X‘s mechanics and rhythm, moving at even medium speed feels wimpy. This feeling of unease that arises when one isn’t performing at his or her absolute best dynamically affects Velocity 2X‘s difficulty, as the effort it takes to complete later stages perfectly is as challenging as it gets. Those simply looking to reach the finish line in each area will enjoy an exciting five to six hour experience; players embarking on a Platinum Trophy run will find themselves plugging in upwards of twenty-five hours into Velocity 2X. FuturLab’s newest offering could be a fun afternoon, thirty days, or six months depending on one’s taste.

Velocity 2X is one of the few Cross-Buy titles that feels outstanding on both the PlayStation 4 and the Vita. The gorgeous, quasi-anime art-style looks sensational on a television and on the Vita’s screen; any visual compensation made for the handheld version is simply unnoticeable. Using the DualShock 4 is always a pleasure, but the Vita’s small thumbsticks allow players to whip the Quarp Jet around at lightning speed. This isn’t to say that there are any control issues on the PlayStation 4, but the smaller travel distance of the Vita’s analog sticks allows players to change directions a split-second faster. Instant Cross-Save allows for seamless transitioning between the two iterations, meaning that players will have a hard time choosing which version they enjoy more. 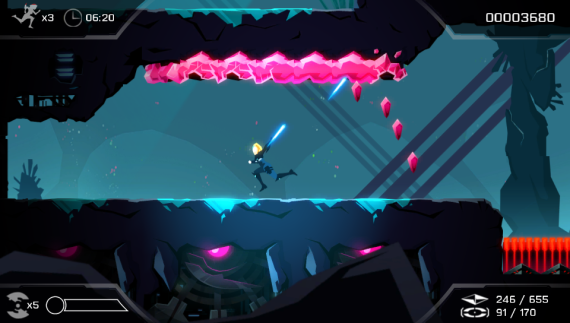 Velocity 2X isn’t just one of the best games of the year, it might just be the best downloadable title available on the PlayStation 4. From the addictive gameplay to the beautiful art design, FuturLab’s newest offering is simply unmissable. Those willing to commit to perfection will find an experience that continually offers a challenge packed with some of the most action-heavy moments available on the current generation of PlayStation systems. Whether or not Velocty 2X actually becomes a Game of the Year winner remains to be seen, but FuturLab makes a strong case. This is the right way to do a sequel.