If there’s one thing you can be sure of when trying out a new Behemoth game, it’s that it’ll defy all of your expectations. Where many developers settle into a comfortable niche once they’ve made a game or two, the house that Newgrounds built has never been content content to stay within the bounds of a single genre. Having found success with a contra-style shooter in Alien Hominid, they made a drastic leap to a scrolling beat-em-up for Castle Crashers, then again to a puzzle platformer in Battleblock Theater. Across every release, the only things that have been consistent are their gorgeous Flash artwork and anarchic sense of humour. With Game 4 (which is what they’re calling the project until they come up with a proper title), they plan to bring those sensibilities to turn-based strategy.

As the delightful narrator from Battleblock Theater informs us, earth has changed quite a lot since being hit by a giant space bear. For starters, storms of green blood rain down across the land, spreading destruction and mutation in their wake. Roving bands of Mad-Max-esque bandits terrorize the peasantry with swords, bows, and weaponized space shuttles. It is a tumultuous time, but one thing’s for sure: it’s not boring. Good riddance to all those quiet suburbs and retirement homes.

The Bear’s impact also smashed the world up into a convenient hex grid, which allows for clear demarcations on the field of battle. Combat in Game 4 is different from what you’d expect in an SRPG. You still move around the grid, and units still attack, but you don’t choose your actions from a drop-down menu or pick targets. Instead, units will randomly attack one or two enemies within their range, seemingly with a preference for closer targets. This might seem limiting, but it actually opens up an array of interesting tactical possibilities. 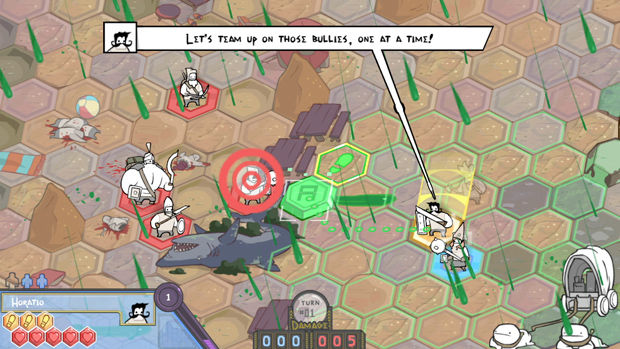 This system places the mechanical emphasis squarely (or hexagonally, I suppose) on positioning. If you put a fighter with a shield between your main force and enemy archers, many of their shots will be deflected. Additionally, if enemies crowd around your units there’s a chance that they’ll be hit by errant projectiles as well. The flipside of this is that the character shielding your party will often not be in range to attack, which means that you’ll end up sacrificing damage for the sake of defense. Of course, some of your characters have ranged abilities of their own (such as axe wielders, who can randomly stun up to two enemies per turn by throwing axes at them), and you might want to use your defenders to give them a bit of distance.

Naturally, some unit types have a clear advantage against others, but it’s not necessarily a cut-and-dry rock-paper-scissors matchup. Instead, matchups are more based on equipment. For instance, a helmet might give a character higher defense, but the weight will limit their movement, and they’ll be susceptible to having the helmet caved in by a mace. Likewise, different weapons have different behaviors that make them better or worse in certain scenarios. In the grand tradition of The Behemoth, most of the equipment you’ll find is pretty out there. You might ride into battle with a space helmet and a banana sword, or something even nuttier if that’s too tame for you. Behemoth games are always good for letting you stamp your personality on characters, so long as you happen to be just a little insane. 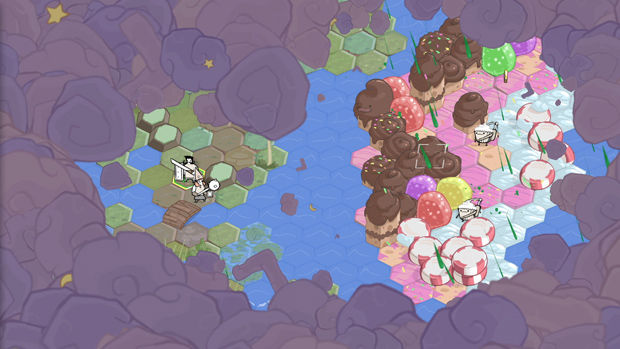 Game 4’s cartoony postapocalyptic world, with its anachronistic technology, fantastical elements, and candy-coated (sometimes literally) visuals, is very reminiscent of Adventure Time’s Land of Ooo. In terms of tone, though, it has more in common with the likes of Brütal Legend or Epic Spell Wars of the Battle Wizards. While I wouldn’t call Adventure Time’s dark fantasy world “sanitized” by any stretch, it doesn’t revel in violent humor like those more adult worlds. Game 4 strikes an odd balance between whimsy and pitch-black humour – exactly the sort of story which The Behemoth excels at telling.

Like everything else from The Behemoth, Game 4 is strange. The studio delights in black, absurdist comedy, and that shines through brightly here (the move from pure pantomime to taunting narration has done their games a great service). The gameplay is a little different, and the random elements have the potential to be frustrating, but building an SRPG that works while eschewing clunky menu systems is quite an accomplishment. We’ll have a long wait before the game is released (or even named, from the sounds of things), which means the studio has plenty of time to fine-tune their little experiment. If the PAX demo and their previous work are any indication, the tuning will be mighty fine indeed.