Certain types of games simply struggle to convey their purpose in a demo setting. While titles with a heavy gameplay focus tend to steal the show at events like PAX, those focused on developing a mystery-filled narrative tend to falter. Mystery games, as a concept, try to confuse us; they attempt to force players to scratch their heads at all times. Escape from Dead Island, Fatshark’s bizarre third-person cel-shaded spin-off of the Dead Island franchise, simply doesn’t lend itself to a twenty minute demo session. Even though its gameplay and level of polish leave something to be desired, it’d be unfair to write this unique take on an established universe off entirely.

It’s clear that Fatshark was trying to create the weirdest demo possible with the playable version of Escape Dead Island. Players spawn on what appears to be a single iceberg in a sea of blood with no instructions as to what should be done. This deeply atmospheric beginning seems to serve as a microcosm of Escape Dead Island as a whole. You’re supposed to be perplexed, this is a psychological mystery, after all. Walking up to one edge of the iceberg creates another iceberg, thus revealing the path the player is required to take. It’s a neat mechanic that highlights just how bizarre Escape Dead Island‘s story will be, though it’s unclear whether or not that story will actually be worthwhile. 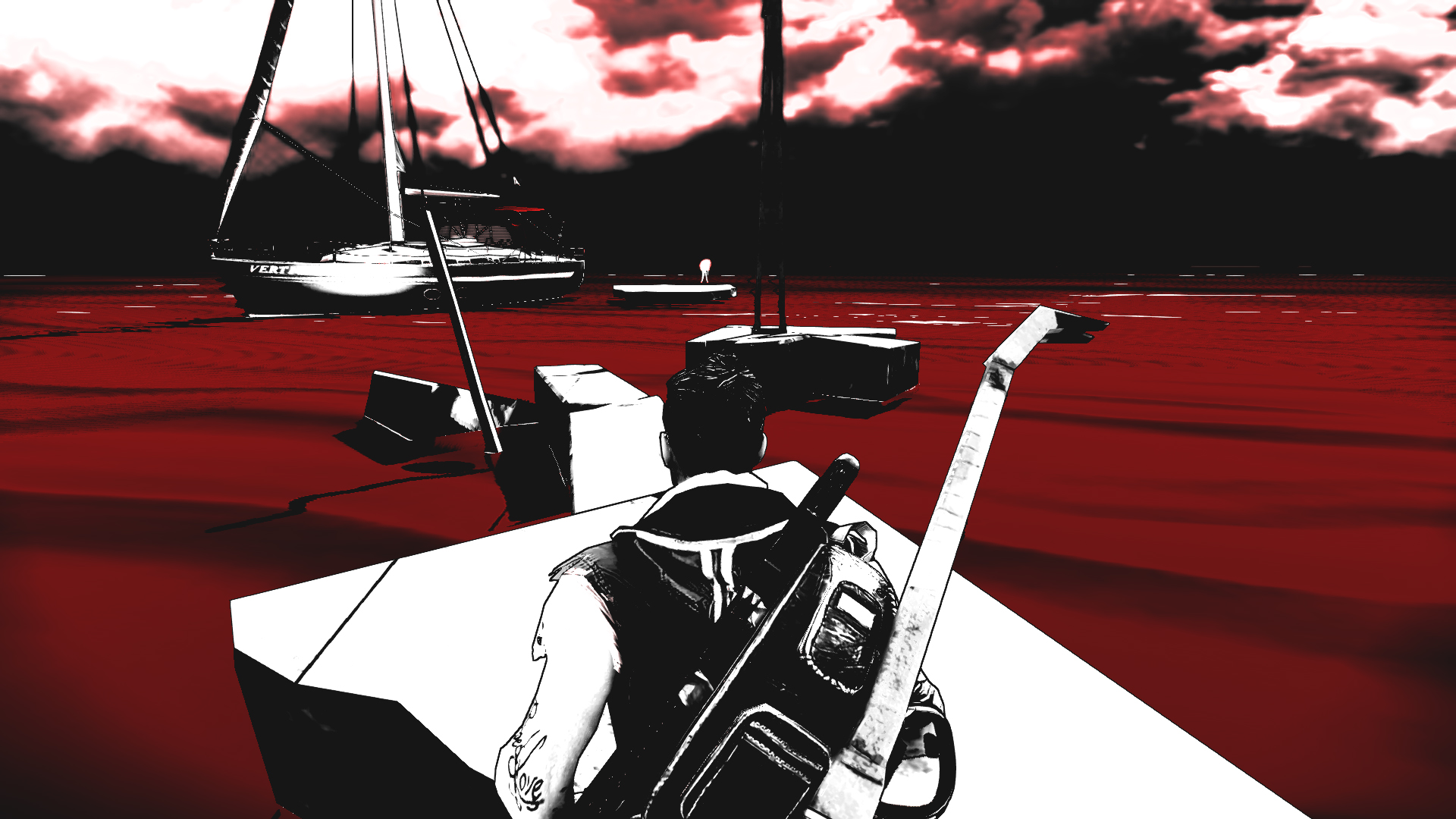 After Cliff Calo, Escape Dead Island‘s main character, seemingly returns to consciousness after reaching the end of the iceberg sequence, a number of questions arise. Why is Cliff losing his mind? Is Cliff actually losing his mind? Why is he on this island? Is this actually an island at all? Escape Dead Island‘s demo answers none of the countless questions it spawns, for better and for worse. I am interested in finding out what the hell I played, but its hard not to wonder if any of those answers will be meaningful. The rest of the demo consisted of Cliff attempting to reach his father’s helicopter while being guided by a mysterious female voice. Yet again, a number of crucial questions pop up during these final fifteen minutes. Is this voice inside of Cliff’s head? Does the voice even exist at all? Why is Cliff’s dad here in the first place? It’s fair to assume that none of these questions will be answered until Escape Dead Island eventually hits storefronts, but it’s hard to tell whether or not we should actually care about any of the answers.

Reflecting back on my time with Escape Dead Island is nothing short of a nightmare (pun intended). For the sake of this preview, I want to be able to let readers know just what the hell I played. I’m sure that I’d have more answers if I sat down with the entirety of Escape Dead Island‘s campaign, solved its mysteries, and learned a few of its secrets. For better and for worse, it seems as though Fatshark was attempting to confuse everyone who took the time to play through the demo. Thankfully, this demo was able to shed some light on Escape Dead Island‘s combat system, art-style, and general level of polish. 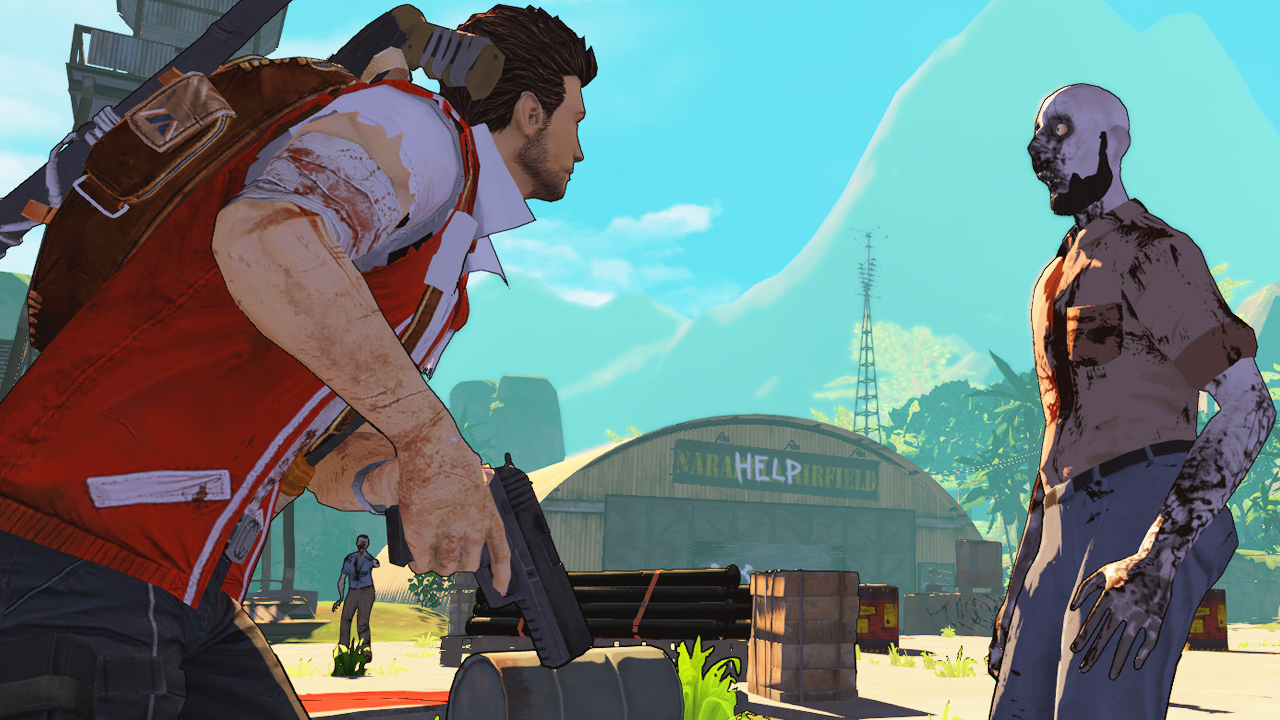 Escape Dead Island is clearly a title that needs a bit more work on the technical front. Cliff’s feet often shuffled beneath the floor when I gave him the command to sprint; combat animations caused some noticeable clipping (both through environmental pieces and actual enemies). In a game so heavily dependent on immersion and cognitive investment, distractions like these end up hurting the atmosphere as a whole. On the bright side, Escape Dead Island is home to some of the best cel-shading I’ve seen in quite some time. Every color seems to pop off the screen, making Cliff’s visual hallucinations feel far more bizarre than they would if a realism-based art-style was used. Because of the uncertainty surrounding its narrative, Escape Dead Island‘s gorgeous art-design stood out as the highlight of its demo.

While Escape Dead Island‘s combat was technically sound, it often felt stiff and unrewarding. I couldn’t help but get flashbacks of yesteryear’s character platformers (read: Sly Cooper 2) every time I entered a fight. The demo’s lone boss battle was heavily dependent on learning one simple trick and then taking advantage of said trick until Cliff emerged victorious. This isn’t to say Escape Dead Island‘s combat is broken or bad, but every battle feels like a throwback to the PlayStation 2 era. For a title so focused on crafting a great story, this is actually pretty forgivable. A title with average gameplay and an excellent story can still turn out to be great, meaning that Escape Dead Island‘s quality is going to be a direct result of its storytelling.

It may seem as though my time with Escape Dead Island left me with a bad taste in my mouth, but that isn’t necessarily the truth. It’s hard to come away with a solid impression of a title that so desperately tries to leave its questions unanswered. Sure, my head may have been spinning after my twenty minute demo, but one thing is certain: this is the most intriguing Dead Island title on the horizon.