In a cabin at the end of the world, you play a game of life and death with a mysterious, hooded dealer. The game deals in your memories, echoes of your life as an adventurer. You must move your pawn across a treacherous path of cards, laden with monsters, dungeons, and unexpected encounters, in order to root out the face cards in each of the dealer’s monster suits and dispatch them one by one. What you stand to win, and what’s on the line if you lose, shall all be revealed in time.

Now that’s what I call a compelling setup. In Hand of Fate you’re seated alone, across from the dealer, with nothing but your wits and your cards to get you through his twisted game. The table and dealer are rendered with the same level of care and detail as something like The Room, and have a similar immersive potency. As you play, he’ll chime in with thoughts on each card, and even narrate some of the stories they represent. It’s a very efficient and engrossing method of storytelling – one that I wish I could experience through an Oculus Rift. 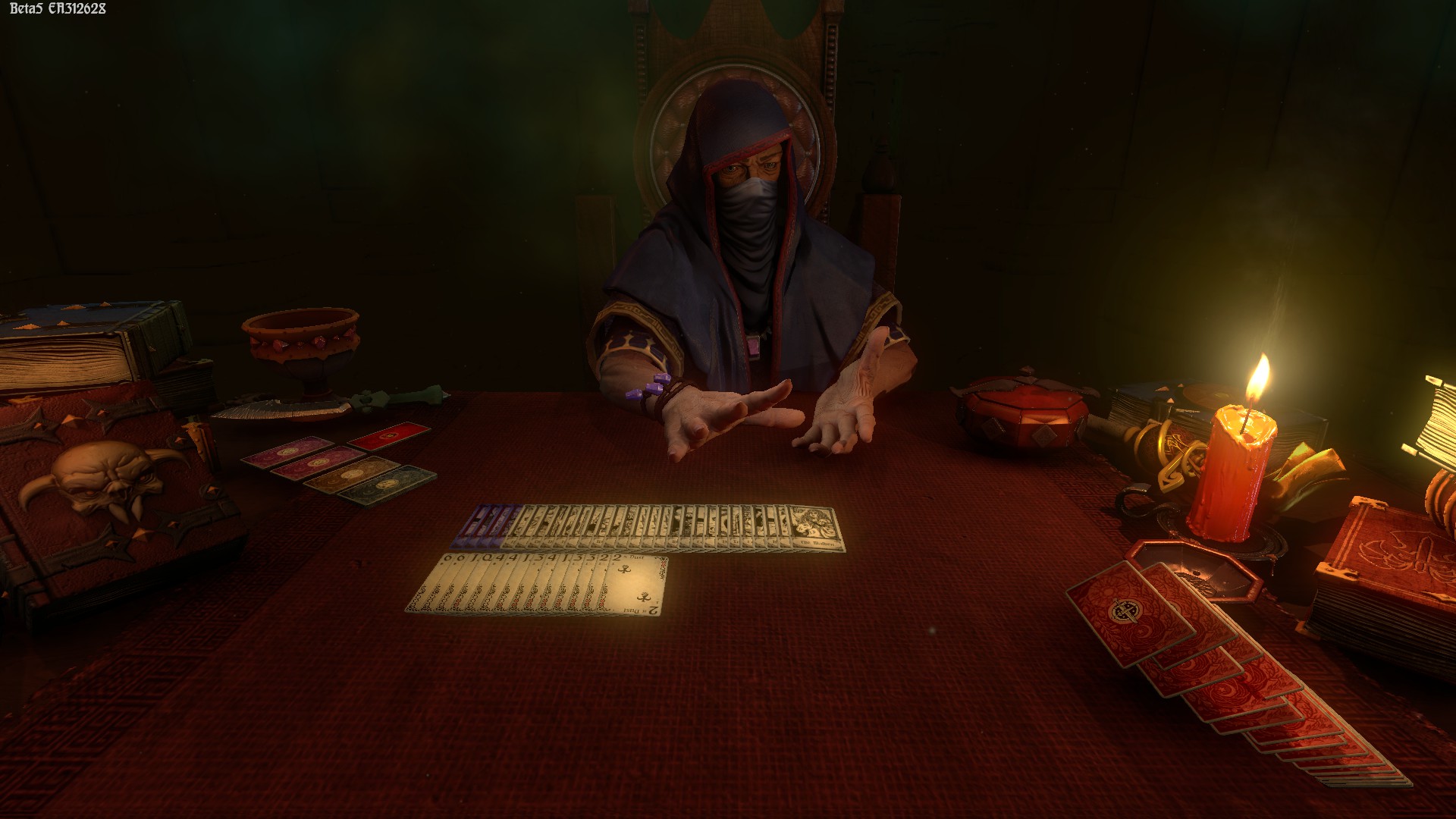 Sorting through cards feels a lot like jumping between planets in FTL. At each one you come across a sort of mini text-adventure, with choices to make and various probabilistic outcomes. One key difference is that you can determine some of the encounters you’ll face by building an encounter deck to your liking. Another is that where FTL leaves the results of your choices up to chance, Hand of Fate allows you a bit more control. With each event, you’re shown four cards, ranging from “huge success” to “huge failure,” which are then shuffled before you. It’s much like the Arcana Chance mechanic in Persona, and as in those games, if you watch carefully you’ll be able to follow the cards and pick something favorable. In practice the cards move so quickly that 99% of the time your fate will be decided randomly, but it feels far fairer than a straight dice roll. Success will often grant you rewards (in both gold and supplies), while failure will often lead to combat.

Perhaps the greatest difference between Hand of Fate and other roguelikes lies in its battle system. Most modern roguelikes make use of turn-based mechanics (like FTL’s cool-down based ship-to-ship combat), or otherwise blend in elements of other genres like first-person shooters and platformers. Hand of Fate, meanwhile, more or less directly copies the rhythmic, counter-heavy combat of the Batman: Arkham games. It might seem odd to center something like this around such simple – some might say casual – mechanics, but when you play the game it’s hard to deny their efficacy. Fights in Hand of Fate are fun, which is vital for a game built around procedural repetiion. Anyone with experience playing the Arkham games will have an easy time getting through any specific encounter, but the real danger of combat lies in how it taxes your dwindling resources. 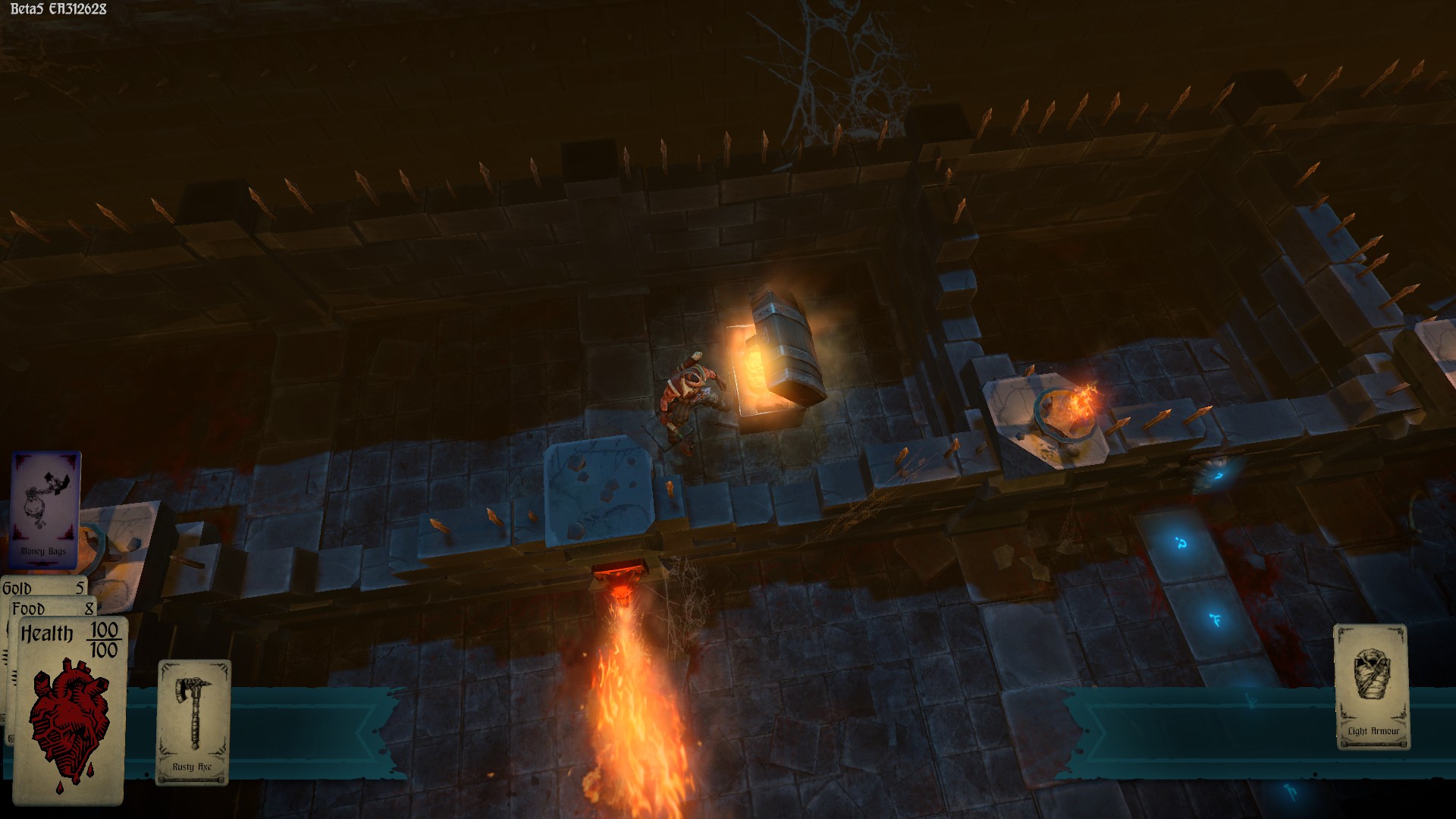 In Hand of Fate you need to make it to each boss while managing your health, gold, and most importantly your food. Every step you take recovers a bit of HP (you start with 100), but in turn it costs you one piece of food. Once you run out, your health drops until you inevitably starve to death. When you’re low on resources, every hit you take in battle could end your journey. But by the same token, you need to win fights in order to earn more food (or gold to buy it). This balance of risk and reward manages to create very rogue-like tension, which is quite a feat given how easy the game might first appear.

Whether you conquer a boss or starve to death, the game doesn’t end when the last card is dealt. Whenever you overcome the challenges of a card for the first time you’ll earn a token, which will in turn unlock more cards. New cards can be added into your slate of possible encounters using the game’s deck builder. As with everything in Hand of Fate you need to strike a careful balance – in this case between seeding the deck with safe cards that will help you progress and unknown cards that will help you unlock new content. You’re also asked to customize a deck of equipment, which will determine what weapons and armor you’ll be able to obtain in each playthrough. 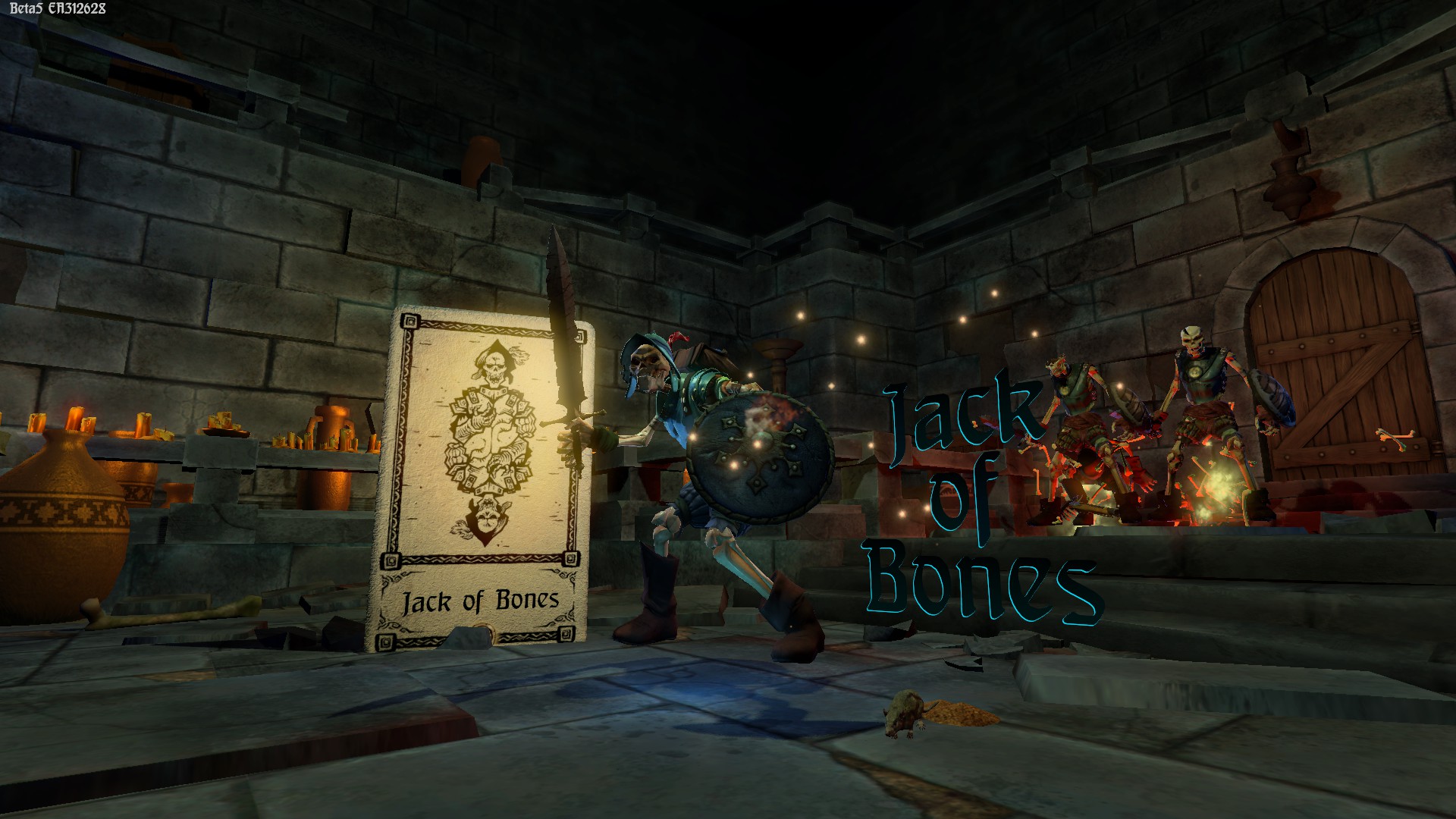 Perhaps the most impressive thing about the game is the way it brings all these cards to life. When you enter combat, the dealer will draw monster cards, which come in numbered suits like you might see in a game of poker. The number on the card determines how many enemies you’ll face, while the suit determines their type – plague cards bring ratmen, while bone cards summon skeletons. Once the cards are chosen, the table fades away, and in its place you’ll see some kind of fantasy arena like a dungeon or forest glade. The monster cards fly into the arena, and your foes emerge from within them. When your adventurer enters the fray, each piece of his equipment is stacked on top of his card, and as that happens it appears on his person. They’re not particularly impressive on a technical level, but the transitions into battle are just plain cool. Hand of Fate is a testament to the power of strong artistic vision.

If you’re the sort who starts playing FTL around 8 and then realizes that it’s suddenly 3, Hand of Fate will consume you. There’s always something new to discover, and the deck-building mechanics allow you to choose what sort of adventure you’d like to have with each run (which has the added bonus of making it feel less like the game’s fault when RNG screws you). Fun combat, solid roguelike dynamics, and an engrossing atmosphere make this one of the most compelling games on early access. And with the newly-introduced endless mode, there’s no limit to how deeply it can suck you in.