Hotline Miami, the gory, violent and addictive top-down shooter that took the indie scene by storm is back with a sequel that looks to outdo its predecessor in every facet imaginable. It’s still a neon-dyed, blood-soaked romp full of Russians, dogs and pool cues, but fans will find some tantalizing additions to the formula this time around as well.

Set both before and after the first game, Hotline Miami 2: Wrong Number intends to fill out the story set down by its predecessor. As such plot is more of a focal point this time around, but that doesn’t mean the developers have completely shifted their focus. In fact, the deeper plot actually allows Hotline Miami 2 to introduce an array of unique characters to the equation, each featuring their own bespoke style of play. Whereas the first Hotline Miami offered only one playable character, its sequel’s broadened roster allows for a  substantial increase in gameplay variety and even challenges the series’ best players with tweaked mechanics. 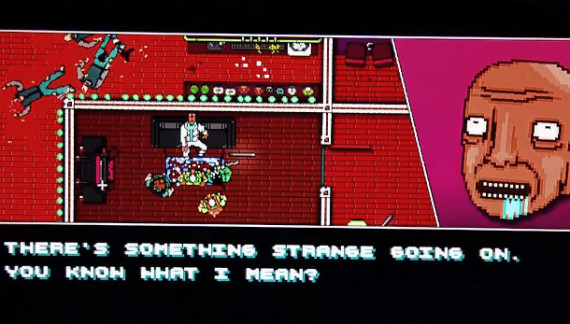 Given a choice of these new characters to start the demo, I went with a burly man wielding two machine guns. Dual wielding is an entirely new concept introduced in Hotline Miami 2, so I was intrigued to see how it would fit in. Aside from your typical hitman, the game also offers a character that fights without guns and even a intriguing option to control two characters at once. It’s clear the team at Dennaton are full of new ideas for this highly anticipated sequel, and it’s great to see they’re not afraid to tinker with the established formula in surprising and exciting ways.

Hotline Miami 2 is just as unforgiving as its predecessor, something fans of the original are sure to appreciate. All the skill-based hyper violent gameplay is here again in spades, and you’ll die hundreds of times in all sorts of different ways as you dissect each level in search of the perfect order of operations. It sounds a little frustrating, and it definitely can be; nobody likes to get shot in the face twenty seven times before they finally reach a checkpoint. But Hotline Miami is such a strange, colorful, and gory experience that once it hooks you it’s hard to quit. 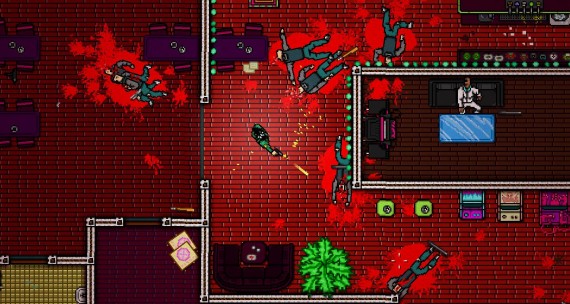 Once I finally got comfortable with the new dual-wielding character, I pulled off amazing combo kills and left a trail of blood behind me as I climbed the stairs to the next floor. I made short work of the first grunt I saw, and prepared to do the same in the next room. Then I was dead. Shot right between the eyes, I couldn’t help but lament my method of progression. So I tried something different the next time, infiltrating the opposite side of the room. Wouldn’t you know it, I was killed again. It was my fault this time too, though; I charged in a bit too confidently and was swiftly dispatched by a man with who knew his way around a metal pipe. And so the demo went, one trial and blood-soaked error after another, until eventually I successfully cleared the area without losing my life. That feeling of accomplishment was so immense and empowering that I dove head first into the next mission, only to befall the same, bloody fate I’d succumb to so often before.

Hotline Miami 2 is all about learning the ins and outs of the mechanics and enemy AI and using it to your advantage. It’s a punishing experience, and one riddled with frustration, but the hyper-violent gameplay is so tight and enjoyable that you can’t help but give it another shot time after time. It’s shaping up to be everything fans could have hoped for in a sequel, complete with amazing pixel art, a diverse and enjoyable arsenal of weapons, and infectious music. The team at Dennaton Games have already announced that Hotline Miami 2 will be the last game in the series, but they’ve also been kind enough to build in a level editor this time around, which means the Hotline Miami community can continue to churn out new and challenging experiences until the end of time.