After spending a fair amount of time meandering around the Adult Swim booth at PAX Prime 2014, I found myself pontificating on a couple of points. First and foremost, Adult Swim’s video game division understands its brand extremely well. This is a Turner-owned division, so providing dumb fun should be priority number one (alongside, you know, making sure every game released actually plays well). Adult Swim Games knocks this aspect out of the park, as everything I spent time with was nothing short of smile-inducing. Secondly, there were a couple of standout titles that are exciting all on their own. Both Adventure Time Game Wizard (which is actually a Cartoon Network title) and Rain World managed to grab my attention despite appearing a bit rough around the edges. Most importantly, these two titles oozed charm.

Rain World is a survival-based title with some of the most impressive procedural generation I’ve seen in quite some time. Players take the role of an adorable slugcat, which boasts the most appropriate name of any video game character outside of SackBoy. In order to survive the upcoming hibernation season, slugcats have to catch and feast upon the bats drifting about the environment. Unfortunately for players, other creatures have the same plan, only they seek to eat scrumptious slugcats rather than nocturnal mammalian creatures. With two stubby arms and a giant slug-like body, Rain World‘s player character is adorably pathetic. The insane design of this merchandising dream contributes to its movement, as each slugcat is unable to move at a fast pace. Instead, players have to make use of the various portals in each of Rain World‘s procedurally-generated arenas to avoid the dreaded monsters that seek nothing but blood. 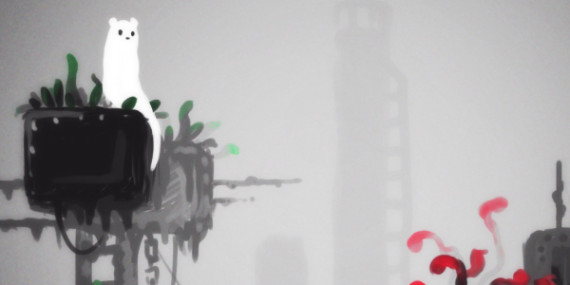 Rain World functions best as a four-player cooperative game, as playing alone can feel somewhat empty. Sure, one could argue that this sense of emptiness bolsters the despair-filled surroundings and premise, but the damage this does to the gameplay is not world the increased level of contextualization. Other than the single-player setting suffering from emptiness and a general lack of direction (which, admittedly, contributes to the frantic chaos of Rain World‘s multiplayer gameplay), its an absolute blast to play. Desperately searching for a tunnel to crawl into while still attempting to eat bats creates an intriguing balance between risk and reward. Should players go for that pack of bats just out of reach, or should they play it safe and advance to the next arena. Rounds can last anywhere from a few seconds to a couple of minutes (if players get extremely creative and lucky), giving the gameplay a constant sense of freshness.

Adventure Time Game Wizard, while somewhat flawed in its actual gameplay, gives gamers the opportunity to create their own platforming levels through an in-game creator or (gasp) the use of pen and paper. Players can either draw in obstacles, gaps, and enemies using a simple select-and-place mechanism on the iPad’s screen, or draw the various in-game symbols provided to them on graph paper. If players opt to draw out their creations manually, the iPad’s camera is used to take a picture of the level design before the stage is rendered. Though it remains to be seen how many people will actually whip out a pencil and paper to create levels by hand (let’s face it, who uses pencils in 2014?), this is nothing short of a clever use of technology. We now have the ability to give players more gameplay options through the use of technology than ever before, so it’s fantastic to see a developer taking advantage of this. 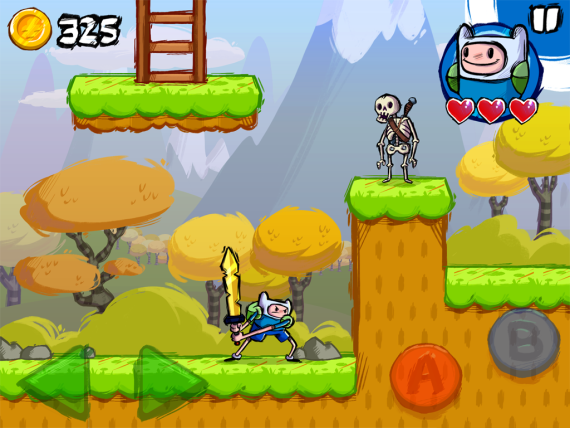 My created level started out as a simple jungle-based platforming affair, albeit complicated through the use of an on-screen mock-controller, before going completely off the rails. Through the creation tool, I was able to add a second world below the jungle made completely out of ice. I decided to push the limits of Adventure Time Game Wizard, as I wanted to see just how complicated of a platformer it would let me create. With damage-inducing spikes placed on every other square in the creator, players who undertook this challenge would have to be as precise as possible to collect every coin. Granted, I forgot to create an ending for this section, so navigating past the endless array of spikes ultimately rang hollow, but it was still a blast to create a hardcore level in a decidedly casual game.

It’s refreshing to see a company that firmly understands its place in the industry. Adult Swim and Cartoon Network games are not about to create the next Halo or The Last of Us, nor are they going to make the next great MOBA. Instead, there seems to be a commitment to incubating the adorable and establishing a firm level of fun. Those looking for a smile or two would be remiss not to give a peak to some of the bliss coming out of Turner’s game divisions.