As a gamer, I love trying new things. I’m especially excited by interesting and original stories, so when I heard about Dragon Fin Soup, the Kickstarted tactical roguelike that incorporates death, turtles and fairy tales into its plot, suffice it to say I was optimistic. Unfortunately, the game didn’t completely live up to its bill, but I did come away pleasantly surprised by other aspects.

Dragon Fin Soup takes place on the back of a giant space turtle named Asura. He swims among the stars, completely unaware of the ghastly deeds occurring throughout his expansive back. It was actually that idea of an enormous, god-like space turtle toting around this world that initially drew me towards Dragon Fin Soup, but it became all too clear throughout my demo that the great Asura played absolutely no part in the game aside from supplying a nifty setting. It felt like a missed opportunity, and a bit of false advertisement; I came for the space turtle, so I wanted space turtle. Stomaching my disappointment, I dove in to the meat of Dragon Fin Soup (wishing more and more it was called Giant Space Turtle Soup). 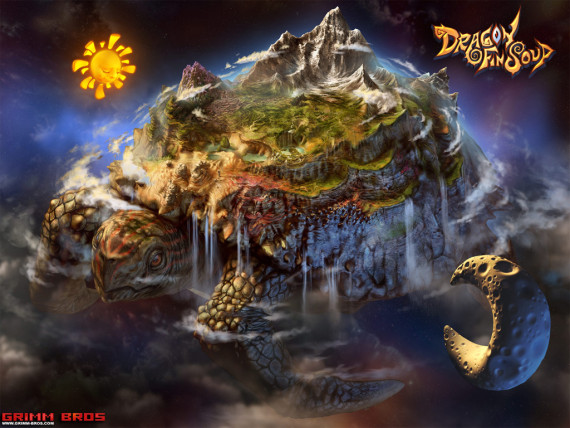 True to its roguelike nature, Dragon Fin Soup throws you into the thick of things without any sort of tutorial. As Red Robin, based on Little Red Riding Hood and a a character developers Grimm Bros. describe as “a shotgun-wielding alcoholic bounty hunter”, you and your two knight companions seem to be hunting something in a dark and dangerous forest. Enveloped in shadows in a top-down world, a familiar sight to anyone who’s played something like Diablo before, players will have to explore the reaches of the map in order to uncover its secrets. I ventured westward to start, encountering multiple enemies, chests, and dead ends along the way, slowly getting a grasp on the game’s mechanics. Dragon Fin Soup‘s semi-turn-based design means players can take all the time they need to plan their next move, comforted knowing their enemies, and in turn the entire world, won’t move until they do. It makes for a game that caters to multiple play styles, from tactical masters to combat junkies.

Dragon Fin Soup does require a bit of thought to play, though. It’s unforgiving to those who charge ahead blindly, and when a grizzly enemy gets his mitts on you it’s pretty much over. Luckily, you can level up your bounty hunter and acquire all sorts of new equipment and weapons in town to level the playing field, where you’ll also come across several recognizable characters from various famous works of fantasy. It’s clear what Dragon Fin Soup is trying to accomplish, an alternate interpretation of fairy tales and fiction, but the game I played didn’t seem committed to the vision as devoutly as its developers.

That’s not to say Dragon Fin Soup is bad, however. It’s actually a very good, and I especially enjoyed myself in its Endless Labyrinth and Survival Modes. Both forego story in exchange for raw exploration and combat, and players hungry for a challenge will adore the biting difficulty each mode offers. The story mode became more interesting after brief dungeon crawling excursions in the Endless Labyrinth, where combat finally clicked. Dragon Fin Soup has a learning curve, especially for anyone unfamiliar with roguelikes or tactical games, but its mechanics are well designed and players could lose hours into it once it sinks its claws in.

I’d also be remiss if I didn’t mention that the game is gorgeous. Bright, confident colors and expansive environments make for a visual experience that reaches beyond the its humble roots. The character designs are great as well, and perfectly capture the alternative interpretation the game is aiming for. Visually, Dragon Fin Soup is an absolute success, but it remains to be seen if its other elements can match its aesthetic brilliance.

Overall, I was moderately impressed with Dragon Fin Soup. It won’t be for everyone, but gamers seeking a tough and rewarding experience with a unique story will be happy with what it has to offer.