Think of Theatrhythm Final Fantasy: Curtain Call as something between a sequel to and definitive version of 2012’s 3DS classic, Theatrhythm Final Fantasy. With this kind of positioning, Curtain Call brings to the table a list of new options in addition to the refinement of old ones, providing an experience that feels both new and nostalgic. But is that enough to entice returning players and newcomers alike?

Folks looking for a story in Theatrhythm Final Fantasy: Curtain Call should immediately look elsewhere for that need, because this title, while bearing the famed RPG moniker, offers very little in the way of a true plot. In fact, outside of the introductory cutscene, the concept of story is practically non-existent. Thus, the synopsis of a world without music needing restored through the collection of musical notes called Rhythmia is strictly doled out for the sake of giving some semblance of a narrative construct for all the Final Fantasy characters to gather under one roof. This means-to-an-end approach shouldn’t be looked upon with any kind of disdain, however, as this is a title that puts gameplay above all else. This makes sense too, seeing as Curtain Call is a rhythm game first and foremost; and one packed full of content as well. 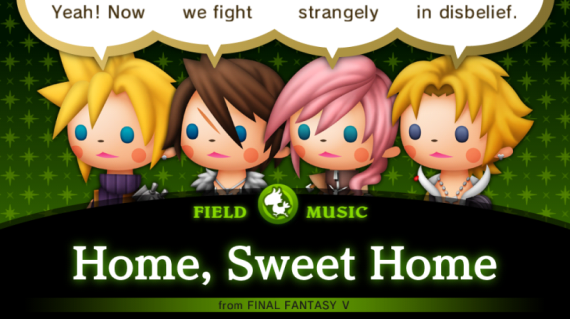 Gameplay-wise, Curtain Call is an amalgamation of rhythm elements, character customization and light combat mechanics, giving birth to an in-depth rhythm-RPG hybrid the likes of which is not seen often. This unique approach to designing the core and supplemental parts of Theatrhythm makes for a game that never feels like a one-trick pony as many of its competitors do. By offering three distinct types of gameplay, Curtain Call is varied in its delivery of systems and entertainment. Screen-tapping, -tracing and -swiping are all integral to the experience, and at all times feel responsive and rewarding. By way of these methods, players must work their way through some of Final Fantasy’s most iconic songs, which are correspondingly categorized in three ways: combat sequences, field sequences and event sequences. The tracks that are offered are contingent upon the type of sequence chosen, and thus utilize the aforesaid, respective gameplay convention.

So while “field sequences” have one tracing lines to keep up with notes as their party leader treks across landscapes meant to portray grasslands, forests and town locales — many of which will be familiar to fans of the franchise — the “battle sequences” see to it that the player’s party of four heroes squares off against some of the series’ most celebrated baddies in a tap-a-thon as they maintain speed with notes that run across the screen from left to right. In both of these modes, players are tasked with hitting notes and tracing lines just exactly in order to earn the most points available. Event sequences are a little different, though, in that they take place against backdrops of memorable Final Fantasy cutscenes, and require players to use a combination of tracing, swiping and trapping. These segments will be the most familiar to those who have played Elite Beat Agents. While the combat encounters were the most compelling of the three kinds of sequences, the event portions have a sort of big-moment feel to them, while the field scenarios are decidedly more relaxed. When coming together, this trifecta creates a dynamic that is varied, engaging and wholly satisfying for fans of the Final Fantasy lineage.

The gameplay itself hits all the right notes, too (no pun intended, really). Tapping and tracing are all super responsive (though replacing the ‘stylus playstyle’ with the button scheme, which requires not screen tapping, just manual inputs through the 3DS’s various face-buttons, felt like the most accurate of the two methods), ensuring that note misses or outright failures are usually due to just a lack of skill or practice. We say “usually”, however, because screen-swiping in an indicated direction doesn’t always register as intended with the game seemingly losing the ability to track the swipe correctly. This was an issue in the first game, hence it’s frustrating to see it crop up again; but the fact that this only occurs sometimes makes it tolerable and not at all game-breaking. 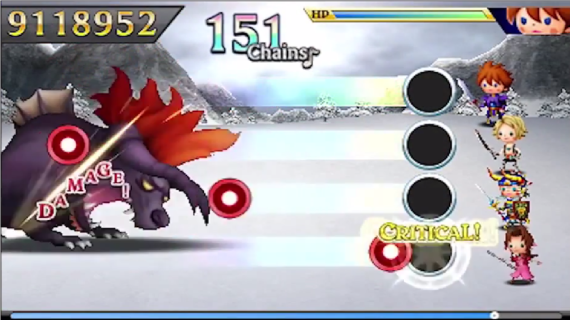 What makes the already sound gameplay all the more addicting are the RPG elements that permeate the title on a secondary level. Curtain Call isn’t just a straight rhythm endeavor; there are plenty of typical Final Fantasy trappings to give the game that decidedly JRPG flair. Players can choose from an extensive roster of familiar faces, spanning every mainline installment and plenty of spin-off titles (including Crystal Chronicles, Tactics, Mystic Quest and even the upcoming Type-0) create a party for up to four characters and then outfit them with special abilities and items. Items and abilities are unlocked through leveling up, and can be important to consider when working through the game’s Quest Medley mode — although, we did find that not even bothering with equipment didn’t change the outcome all that much in most early going instances. Customization becomes more paramount in the latter stages of Quest Medley, but for the first several hours it all feels more like fluff than some kind of vital mechanic.

Speaking of modes, Curtain Call feels beefier than its predecessor. To that extent, we now have online play and the new, aforesaid Quest Medley, in addition to regular one-off exhibitions. The Medley endeavor is far and away the most robust of the modes; it requires more from players, but also rewards them equivalently. Essentially, it gives players various branching paths to follow that ultimately culminate in a boss battle. Along the way, folks will play various songs from the franchise, earning points, unlocking songs and other goodies (art and virtual trading cards), as well as leveling up. From start to finish, a single playthrough can last anywhere between 10 and 30-ish minutes depending on the difficulty. The higher the challenge, the longer the chain of stages will be before crescendoing into the final boss battle. 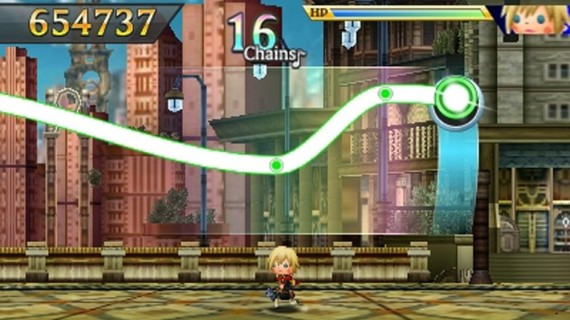 These segments generally don’t overstay their welcome but clearly require a bit more commitment than the basic one-off’s. Because the Chaos Maps in the last game were rather bite-size in nature, some may find this new Medley portion overstaying its welcome ever so slightly. But even still, this feature is the true star of the show and will be where players spend the majority of their time — at least until all songs are unlocked and they move on to the glorious multiplayer. Nevertheless, Curtain Call serves as a game that can be picked up for three minutes or three hours. Whereas the singleplayer experience of the first title felt shallow, this feels comprehensive with its offering of deep, rich content.

And if solo-play isn’t enough, there’s a Versus mode to boot. This isn’t just a tacked on affair, either; this is a out-and-out competitive feature that pit players head-to-head with a friend or AI foe, through local or online means. The purpose here is to land a bigger score, and through the use of EX Bursts — special attacks that can penalize or speed up/slow down an opponent’s screen and notes — matches are fierce and wholly addicting. Better yet, this mode is super accessible and hassle-free, making it ideal for pick-up-and-play.

Theatrhythm Final Fantasy: Curtain Call is also a game that is ripe with personality, if it wasn’t already abundantly obvious. The graphics, all drawn in a cute, chibi-style are utterly charming, mostly because it’s utterly heartwarming to see some of the series’ iconic heroes and villains presented in such an adorable way. Moreover, the 2D art direction suits the 3DS’s capabilities well; even the 3D effect isn’t obnoxious here! The aesthetic in general, really, is top-notch with beautiful menus, text, and nostalgic window-dressings. Couple this with the incredible audio fidelity, which clearly is the game’s strongest presentation aspect, and Curtain Call easily feels like a AAA title.

Theatrhythm Final Fantasy: Curtain Call is a game without many flaws. If anything, it may feel too straight-forward for some, or not different enough from the first title to warrant another purchase for those who picked up the original a few years back. But even then, the first game is completely obsolete at this point, and seems to have served as merely a foundation off which this installment was built. To put it plainly, this is the definitive version of Theatrhythm. The track list spans 30 years (clocking in at 221 songs) and manages to pick nearly all the best or most well-known pieces from the franchise’s rich audio history. The enhanced RPG-lite mechanics, sheer wealth of content and grade-A presentation values make this a must-buy title for anyone who considers themselves a lover of Final Fantasy or music in general.