By the nature of this discussion, heavy spoilers lie ahead for many Telltale games. Consider yourselves warned.

I’m a huge fan of Telltale’s games, but I often hear complaints that the choices they offer are illusory at best. This is true, to a degree. No matter what decisions you make in The Walking Dead Season One, Carley and Doug will be dead by the end of Episode 3, and Lee will die in front of Clem in the final moments of Act 5. You can’t really do much to affect causality in these games (even The Wolf Among Us always ends with the Crooked Man deposed, though you can miss some clues along the way). Instead, your choices define how the rest of the world sees your lead character, and how they see themselves.

There are a number of advantages to this approach. It allows writers to craft a more personal, emotionally-resonant narrative, and in some ways it reflects reality. We often have no control over what transpires around us, but we can choose how we react to it, and those choices define us. What people “will remember” about us isn’t just important in our interactions with them, either – it’s the only thing we can really leave behind when we die. There’s also a more pragmatic advantage to consider: it’s nearly impossible to create a sequel to a truly branching narrative.

There are two basic kinds of narrative structures in non-linear games. The first – and the one that a lot of gamers clamor for – is called a “branching” narrative, so named because it starts at a singular point a spreads out from there. There aren’t actually all that many games that have true branching storylines. You only really see the concept executed fully in visual novels and adventure games, as well as a select few RPGs. These are typically titles with no expectations for a direct sequel, like the Westwood Studios Blade Runner game, or *shudder* Shadow the Hedgehog. When games like this do get a sequel, one ending is usually selected as “canon” while the rest are disregarded. In an age where saves carry over across series, this solution is no longer viable.

Most supposedly branching games have what’s colloquially referred to as a “string of beads” structure – the story “spreads out” every once in a while, but always comes back to a single track before too long. Countless developers use this structure, from Bioware to Rockstar to – naturally – Telltale. It’s this structure that makes their series-spanning story arcs possible in the first place. Because each episode and season of Telltale’s games ends on a more-or-less fixed point of reference, they don’t have to change much about the opening of the next part.

Consider the case of The Walking Dead. If it were possible to save Lee’s life in No Time Left, for instance, then The Walking Dead Season 2 couldn’t exist. The story would have to start from two VASTLY different setups – the one in the game, and one where Lee and Clem are either alone or with Omid and Christa. Telltale would either have to create two different games with their own branching choices to account for the difference (effectively doubling the cost of the game), or they’d have to find a way to kill off Lee at the beginning, thus invalidating the choice at the end of the last season entirely. 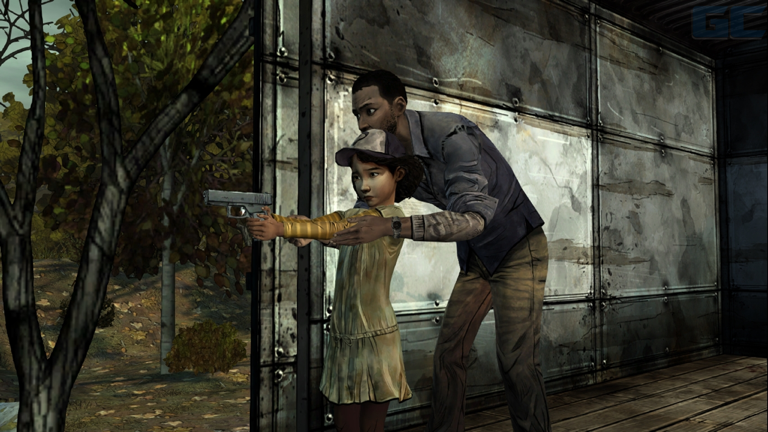 Telltale actually makes a bold choice in Season 2, which can end with Clementine in a number of different locations accompanied by one of two possible companions. This means that her story is more or less definitively “over,” as there’s no budget-efficient way to continue it in future games. Her decisions might still have knock-on effects, but The Walking Dead Season 3 will almost certainly have to focus on a different player character.

Some might take this to mean that Telltale is finally making more “open” games. Indeed, I heard a lot of rumblings at PAX about how Tales from the Borderlands uses an unreliable narrative to give its plot more branches. Many are saying an improvement, but I’m not convinced. The Walking Dead Season 1’s more fixed ending hits me a lot harder than the optional ending I reached in the second season. I’m also not convinced that Tales from the Borderlands will have a truly branching storyline, either.

Having played the PAX demo, Tales from the Borderlands strikes me as a slightly more irreverent take on a standard bead string. The various protagonists’ lies might create bigger beads than we’re used to, but it’s clear that it’s all heading toward the same conclusion. By the very nature of being told in flashback, it has to. Once the characters are done regaling each other, there’s a possibility that their story could have multiple possible outcomes, but that seems unlikely given that this is meant to be part of the (mostly linear) Borderlands canon. Like the alternate scenes in The Wolf Among Us, their embelishments will give the game replay value, but I doubt players have the control over causality that they seem to crave.

As cool as branching narratives are, they’re simply not feasible for most companies, especially not those trying to build or flesh-out a series. Voice acting and animation make wide branches even more prohibitively expensive, so if you’re looking for something that gives you that degree of control, you’ll need to look at games where that’s the sole focus of the writing. You might find Unrest to be to your liking, or a visual novel like 999 or Virtue’s Last Reward. Just don’t expect to have that kind of control in games from the likes of Telltale – not only is it outside their scope most of the time, it’s also generally a far cry from what they’re trying to accomplish.