Though Wildstar seems to have done pretty well for itself, its subscription model has been a hard sell for a lot of players. This cost was supposed to be augmented by monthly content drops, which would enforce the notion that players are buying into DLC instead of just more of the same game. The first few drops hit on schedule, but many players complained of bugs and optimization issues, so a decision was made to hold back the third drop until it’s stable (and launch a host of other fixes alongside it). This has lead players to question if they’ll really be getting their money’s worth out of their subscription. Having seen the next content update, I can say with conviction that they will.

In addition to a host of tweaks, bug fixes, and balance updates, the Wildstar’s next drop will come with a brand new area called The Defile, which, like Blighthaven, is caught up in Drusera’s battle with the strain. It’s a zone of sharp visual contrast between a few bright areas of safety and the encroaching corruption of the strain. The area contains a bunch of new loot to collect, and plenty of group PVE content, including 20-man quests that, while not quite as challenging as a raid, will allow elder-game players who have yet to complete attunement to get a taste of large-group content. The new zone will help to wrap up a lot of Drusera’s story, just in time for the next big step in Wildstar’s narrative: the Nexus saga. 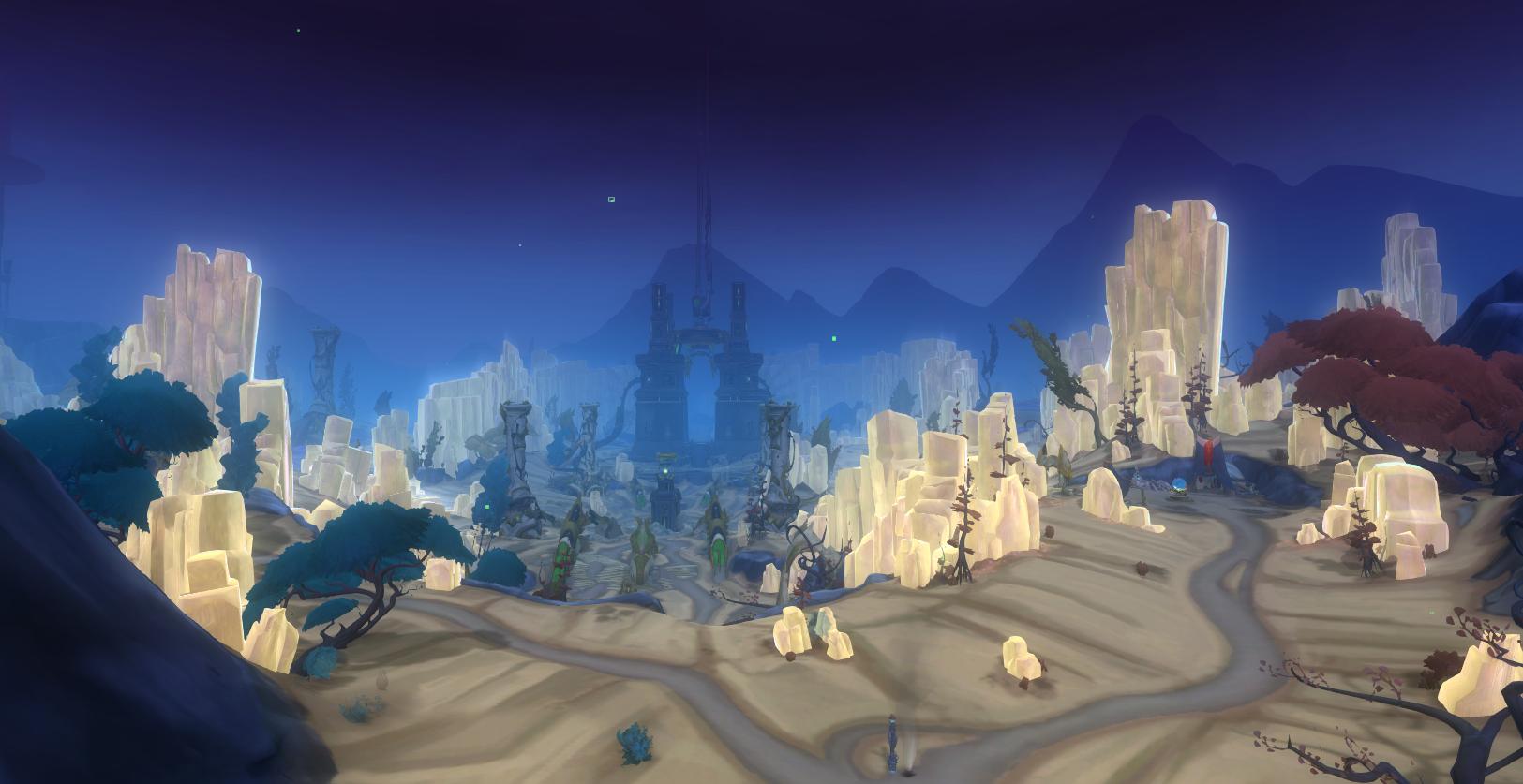 The Nexus Saga kicks off with Journey to OMNICORE-1, a fully-voiced single-player instance that offers a variety of puzzle-solving and combat-based challenges. In the instance, players will journey into The Caretaker’s AI core to sort out the bugs causing his troubling insanity. On an interesting note, this mission takes place concurrently with the 40-man Datascape raid within Wildstar’s canon, so while you’re busy fiddling with computers in the real world, raiders in the virtual world will be battling digital monstrosities. Of course you won’t be running these quests alongside a REAL raiding guild – even if that were technically feasible, almost no guilds have actually made it to the raid yet, and none have beaten it. Still, it’s neat to see scripted content that mirrors some of the hardcore group content going on in the main game.

What’s neat about this instance is that it features full-fledged cutscenes of the same caliber as the Flicks used to market the game. These ads feature top-tier animation and solid cinematography that’s conspicuously absent from most of the main game. Coupled with full voiceover, these cutscenes add a lot of gravitas to the events of the instance, and make it feel more polished than the story content you see as you grind up to 50. As the Nexus saga continues, we should see more and more high-quality narrative content for solo players who want to enjoy Wildstar’s charm and humour.

Between The Defile and OMNICORE-1, this drop has nearly as much content as the previous two combined, with plenty for groups and solo players alike to enjoy. Changes are also being made to raid attunement and other late game stuff, so getting to Wildstar’s hardcore content won’t be quite as much of a grind. Assuming that the drop hits early next month, Carbine will still be on track to deliver the value people are expecting from their subscriptions. With that said, they’re only going to make the drop when it’s ready. In the balance of things, though, it’s better to get a polished product a few weeks late than it is to play something rushed and buggy.