Along with the free DLC that allows you to play as the villains from the game, images were let out during TGS that revealed Hyrule Warriors will also receive it’s own brand of Season Pass. These packs range in providing new weapons, scenarios costumes and ultimately new characters. These do vary in price as well. The sets included are:

By far the most interesting of these packs is the Majora’s Mask one, mainly in providing new characters to play as, one of them most likely will be Skull Kid, the other however is anyone’s guess, my hope is Tingle.

Of course you can buy all of these together for 3000 yen, and is said to save you 1000 yen, roughly saving you ten dollars, doing so also provides you with Dark Link as a costume. Nintendo of Europe also confirmed that they’ll also release the packs over to European gamers, Nintendo of America has also announced it’s arrival, for half of what Japan has to pay 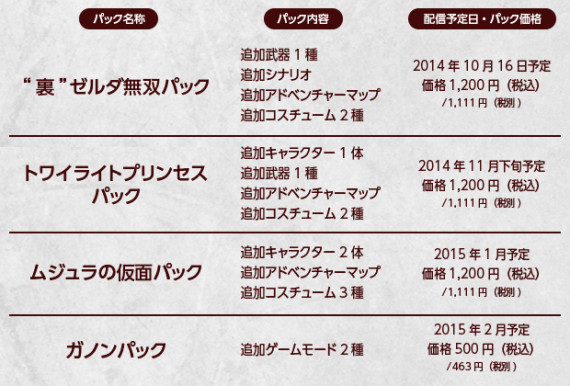