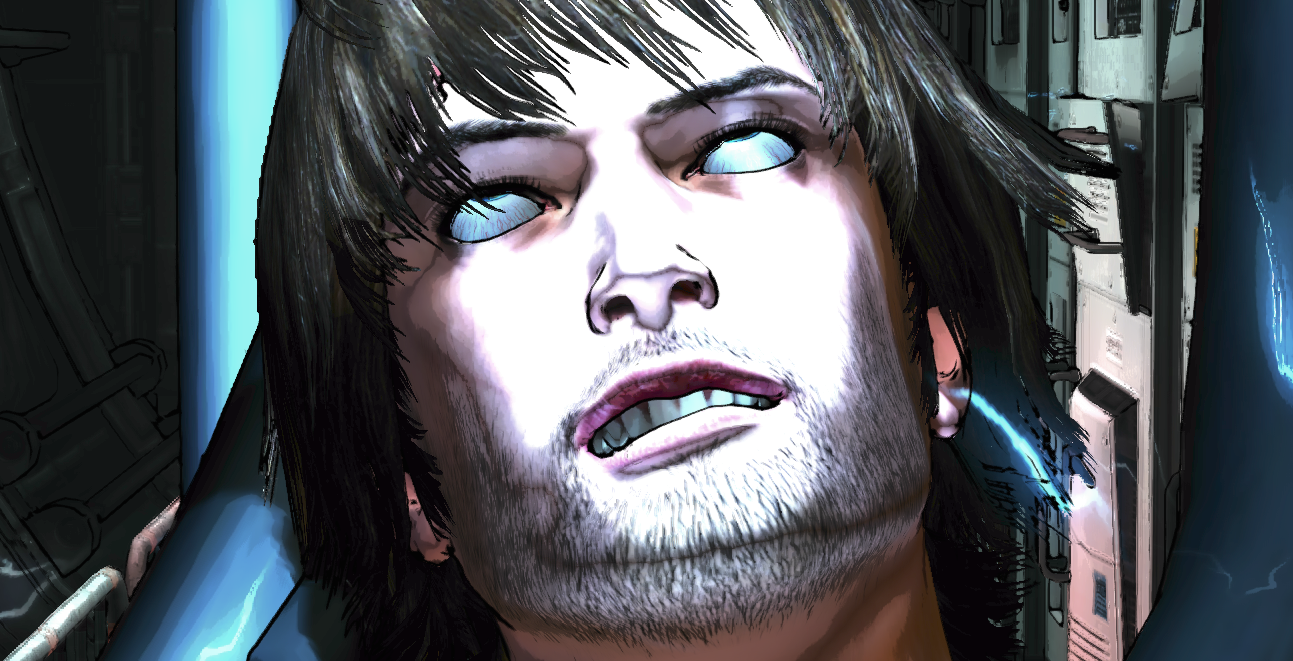 Note: Because D4 is an episodic title, plot spoilers will inevitably arise.

Nailing oddity is a finicky prospect. If one is trying to make a strange game, there has to be some semblance of logic involved, otherwise the final product ends up being totally incoherent. If a developer can firmly balance being weird and being gripping, there’s a chance something special could be in the works. Enter D4: Dark Dreams Don’t Die, the latest project from the mad mind of Swery, the director of Deadly Premonition. Though some control-scheme oddities occasionally get in the way, it manages to find a position of equilibrium between campy, insane and downright chilling.

Players take the role of Detective David Young, a native Bostonian and former member of the heralded Boston Police Department. After the tragic murder of his wife, Little Peggy, and the unknown circumstances thereof, Young is left with no memories other than her final words: “Look for D.” On the surface, this is your standard “cop focuses on one case until his entire life devolves as a result” story, but a major twist makes D4 feel like a fresh take on a well-worn trope. The events of Little Peggy’s attack have given him the ability to use mementos, or items with memories embedded inside of them, to transport to specific events in the past. For instance, by touching a bloody U.S. Marshal’s badge, Young is able to travel to the cabin of an airplane that serves as the setting for the first two chapters of this episodic adventure. 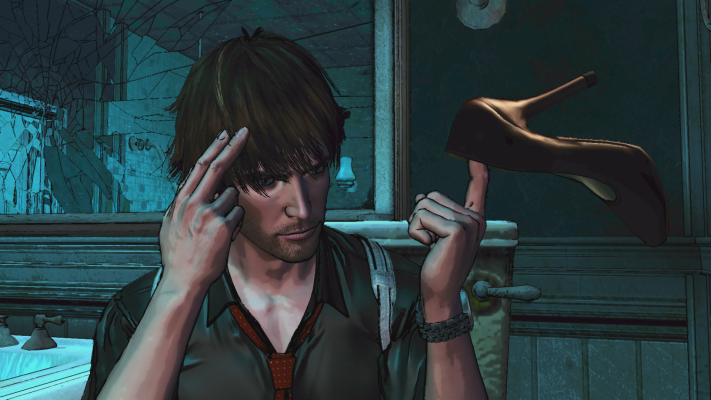 Little Peggy’s murder was directly related to “Red Blood,” a mysterious designer drug that gives its users almost supernatural abilities. While it’s unclear exactly what Red Blood has the potential to do, it seems as though the drug causes extraordinary strength, increased environmental awareness, and the general feeling that one just might be a god. After learning that a Red Blood courier with knowledge of “D” mysteriously vanished from a flight struck by lightening, Young uses a memento to attempt to gain insight into just what happened on the night of his wife’s murder. En route to solving the miniature mystery of the missing courier, our hero encounters a number of ridiculous characters armed with some of the strangest dialogue seen in any game in years.

From the fashion-designer who’s sexually attracted to a mannequin dressed like himself to a blonde woman with an intense case of Obsessive-Compulsive Disorder, every character in D4 is entertaining in their own right. It’s just about impossible to predict what each individual will say next, making the moment-to-moment storytelling nothing short of gripping. There’s weird meta-mysteries that seem to exist both inside of and outside of the main storyline, including a the presence of a seemingly omniscient slow-talking giant fascinated with cutlery and odd moments on a frozen pond inside of the Boston Public Garden (as a native Bostonian, the Make Way for Ducklings Statue cameo was much appreciated). Whether any of the many questions brought up in D4‘s prologue and first two episodes are answered remains to be seen, but the sheer amount of conspiracies to ponder provide players with some exciting food for thought. 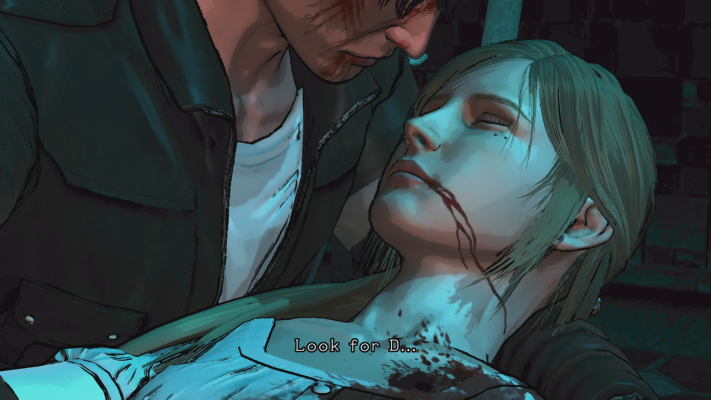 The balance between campy humor and chilling intensity is handled masterfully. While there are times that D4 seems too cheesy for its own good (namely the Boston stereotype-filled dinner discussion between Young and his former partner Teddy about clam chowder), this is a title that feels acutely aware of its ridiculousness. For instance, even during that corny conversation about the best clam-chowder in the world (sorry Seattle, there’s a reason it’s called “New England Clam Chowder”), there’s tiny details that should bring a smile to many a face. Perhaps you’ll chuckle at the fact that Young doesn’t stop crumbling oyster crackers onto his cup of chowder, causing the pile of crumbs to rise to insane proportions. You might spit out your beverage upon noticing that Teddy eats pizza slices a half-dozen at a time. Awkward humor is everywhere in D4, and it’s always welcome considering how undoubtedly bizarre the rest of its content is.

D4 has firmly cemented its place in the discussion for the strangest game of 2014. Within minutes of booting up the prologue, players are treated to a QTE-based fight with a leotard-wearing freeloader who legitimately thinks she’s a cat. This isn’t a joke, she legitimately spits up a dead mouse before hurling objects at Young’s face. Later, a seemingly Red Blood-addicted flight attendant frequently takes puffs from an inhaler, only to exhale red mist into the air in a state of awkward euphoria. Young’s dead wife will appear time and time again, and it’s largely unclear whether these appearances are mere visions, actual arrivals, or something else entirely. Not convinced D4 is bizarre? Maybe the in-fight moment where an enemy stops to pitch a baseball (proper form and all) to a mannequin-leg-wielding Detective Young will change your mind. D4 frequently goes so far out of bounds that players eventually forget that bounds ever existed, but it does this in an exciting way that makes complete sense within its internal logic. 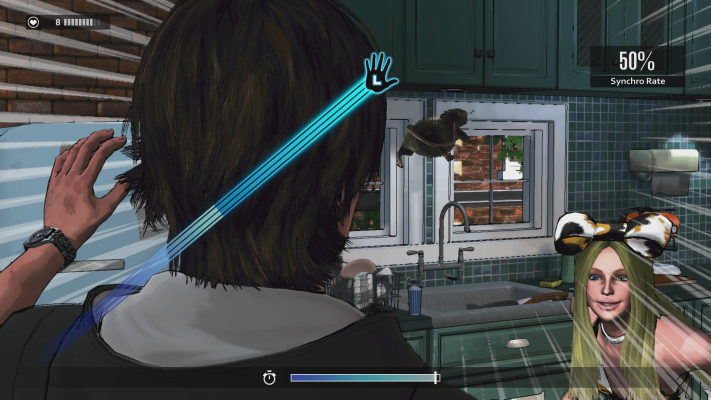 Each of D4‘s two chapters has essentially the same basic structure, prologue notwithstanding: Young uses a memento to travel to a specific point in the past, then he gathers a number of clues in order to figure out just what’s going on. During investigations, players can activate Detective Young’s Vision Mode, AKA D4‘s take on the standard all-seeing “Detective Mode” in most mystery titles. This process is made more challenging through the addition of life and stamina bars. The life bar is pretty self-explanatory: lose all of your life and you’re dead. D4‘s stamina bar makes its gameplay much more interesting, as it limits the amount of items Young can pick up in the environment. It’s a brilliant way to circumvent the painfully lame strategy of grabbing every item in the absence of actually trying to figure out what’s going on. Yes, one could technically use Vision Mode to figure out where each clue is, but there’s something to be said for not being able to see everything all at once. D4‘s gameplay sends a clear message: not everything is important, so focus on what is.

It’s strange to think that one of D4‘s smartest features is, well, the ability to turn off one of it’s most prominent features. While it can be played entirely with Kinect commands, giving players the option to switch to a controller-based control-scheme at any time is brilliant. It’s absolutely true that the gesture-based quick-time event sequences are far more exciting when using gestures and being able to use voice commands to respond to characters prompts is immersive. However, the general moment-to-moment gameplay can suffer as a result of finicky motion controls.

When using the Kinect, players have to raise one of their hands in order to activate a hand-cursor on the screen. After using arm motions to guide this frequently jittery icon around, players can then choose an item they want to interact with (after all, this is a “traditional” adventure game) by closing the fist of said hand. While this seems like an intuitive process, it can often take two or three tries to get one’s selection to actually register. This unresponsiveness creates one of the most frustrating negative video game tropes known to man: “I know what to do, but the game just won’t let me do it.” Yes, this process can get tiresome quickly, and no, this isn’t the title that will finally make you love your Kinect. Thankfully, those who want to experience D4‘s bizarre story without being forced to use their Kinects can simply play with the fantastic Xbox One controller, thus nullifying any and all control issues that may arise. 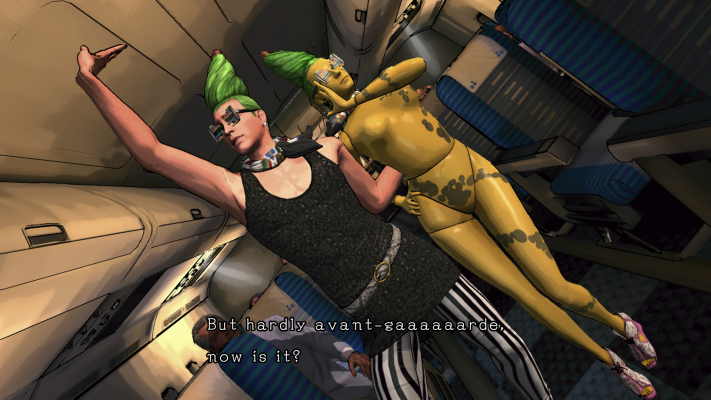 D4: Dark Dreams Don’t Die is one of the more pleasant surprises of the year. When one hears “bizarre episodic mystery title that uses Kinect,” a high-quality product isn’t what immediately comes to mind, but that’s exactly what D4 is. It feels like a Telltale Game on LSD, which couldn’t be more of a compliment. This is a mystery that’s hard not to get sucked into, as its “anything goes” logic will leave players wondering what’s going to come next. From its insanely quirky characters to its underlying tragedy, D4: Dark Dreams Don’t Die is oddity done right.