The shoot ‘em up (or shmup) genre has a history of awesome games both in the arcade and home console space. Still, the genre feels somewhat resistant to change. Developer Kraken Empire and publisher Rising Star Games hopes to shake up the formula with its upcoming shoot ‘em up Kromaia. Instead of using expected 2D, 2.5, or on-rails 3D gameplay, this title grants players full movement freedom in a visually distinct 3D space. 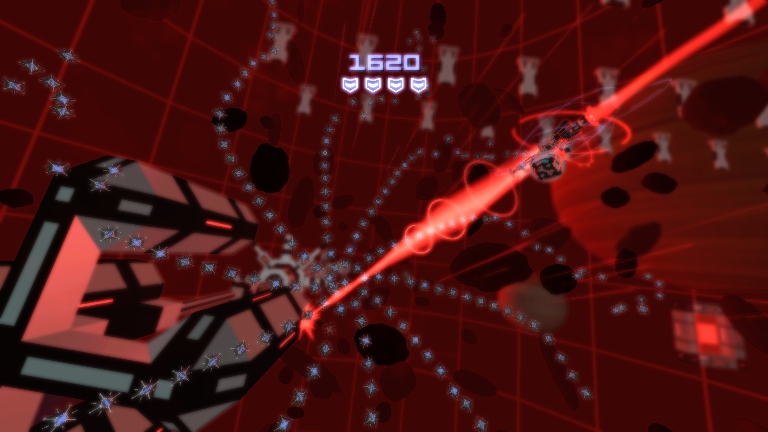 Jumping into a stage is immediately challenging. As you propel forward to various goal points, enemies swarm around from the left, right, or basically any other direction as it pleases them. Others simply guard points you’re headed towards and lob bullets your way. Placing the sensitivities of a shmup into an “open” play space ratchets up difficulty in ways that take time to become accustomed to. The current build doesn’t appear to offer any difficulty options, either. Once your shield is fully depleted, the game ends.

Unlike most shooters, Kromaia also doesn’t offer power-ups dropped by enemies. Instead, your ship is either pre-selected by the stage, or can be chosen independently in Score Attack mode. Weapon types include a very precise laser, homing shots, close-range sword, and the like. Once immersed in a level there are pick-ups which offer additional boost capacity and replacement shields (as opposed to different weapon types). Additional points will be found in Score Attack Mode as power-ups. As of now it appears that there are only two gameplay modes available. 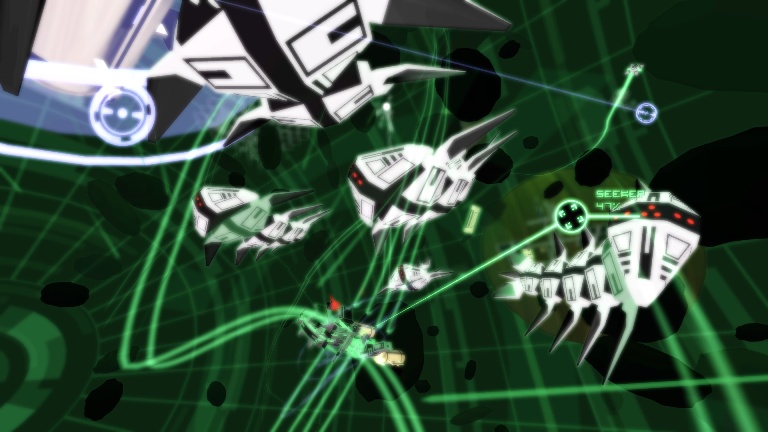 Kromaia also hopes to turn heads with its minimalistic colored polygonal world. It looks unique, and if anything, to have been inspired by fan favorites such as Rez. Each of four playable stages has its own simple, vibrant color scheme and associated gigantic boss. Angular enemies, asteroids and buildings all float about the space. It’s a strange, sometimes confusing, look as bullets reign down upon you from all angles. Although the visuals look striking, they can overwhelm the screen. Finally, without a proper map you’ve got to memorize things like which weird alien glyph stands for what power-up. This typographical aesthetic also exists on menus – but thankfully an English translation is always readily available.

Getting used to playing a shoot ‘em up from this perspective takes a fair amount of time. The choice of controller or mouse and keyboard controls is given. Although the controller is marked as an “advanced” control setting, it’s not particularly tougher. Find whichever method is most comfortable first as Kromaia requires a careful understanding (and devoted attention!) to play well. Even the most focused players may still suffer “unfair” deaths from time to time. 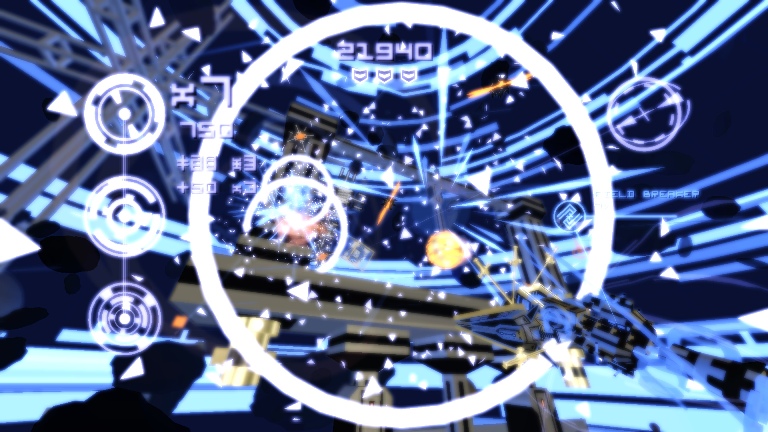 There’s a lot about Kromaia, from its visuals to 3D landscape, that draws immediate attention from shmup fans. Some may dislike the approach because it doesn’t feel like a “classic” genre title. On the other hand, non-fans might be intrigued simply because it is unique. All in all, it has been a long road for the game, from its unsuccessful Indiegogo crowdfunding campaign in late 2013 to impending launch. We’ll see how the gaming populous reacts to Kromaia when it hits Steam on October 23.