It seems that Steam’s new curator system isn’t going to be limited to groups and Youtube personalities… or even to game recommendations, for that matter.

Gunpoint designer and writer Tom Francis has reported on Twitter that Steam has given developers the ability to choose which curators they want to show on their games’ store pages, as long as they abide by the set regulations of the curator system. This allows developers to customize their page with positive reception from curators if they choose to do so. 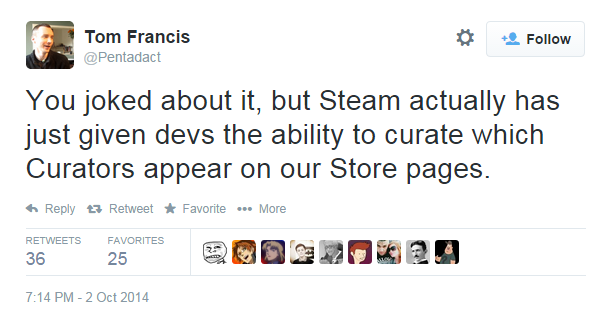 In addition to the “curating the curators” angle, Steam has also added a regulation requiring any curator to disclose whether or not they’ve accepted money (or other compensation) for reviewing a product or posting a recommendation. The regulation is now included on the Steam About page for Curators.

It appears that Steam wants to keep as many cards on the table for their new curator system, which has already been hit with manipulation by users and curators alike. Keep an eye out for what curators appear on the store pages of newly released Steam games.