On October 5th, Luke Burbank, a podcast and radio personality, did a segment for Sunday Morning on CBS that caught my eye.  Here’s the two minute bit:

In the video, Burbank attacks both streaming on services like Twitch and playing video games directly.  He not only cites video games as a “notorious time-waster” as if it were a well-known fact, but also he wonders “why exactly would someone want to watch someone else waste their time?”

After watching, I was in complete disbelief.  CBS Interactive had immense forethought in partnering with Twitch and Major League Gaming over two years ago, and I’m sure backs are being patted over the payoff for the then risky decision, even if the exclusivity deal has run out.  So, why is the same company that owns games media giant Gamespot as well as the eSports news outlet onGamers and frequent supporter of eSports willing to host something so flagrantly ignorant?

Burbank goes on to compare watching streams on Twitch to watching “other people scroll through their Facebook news feed”  ignoring the vast communities created by streaming services, as well as the social involvement supplied by Twitch chat.

Then Burbank takes it another step further saying that watching eSports “re-creates the trauma of (his) childhood, by watching other people play video games,” which I find absolutely ludicrous.  Watching honed professionals combine talent, practice, and skill in huge arenas is not comparable to watching your friend hog the controller when you were ten. 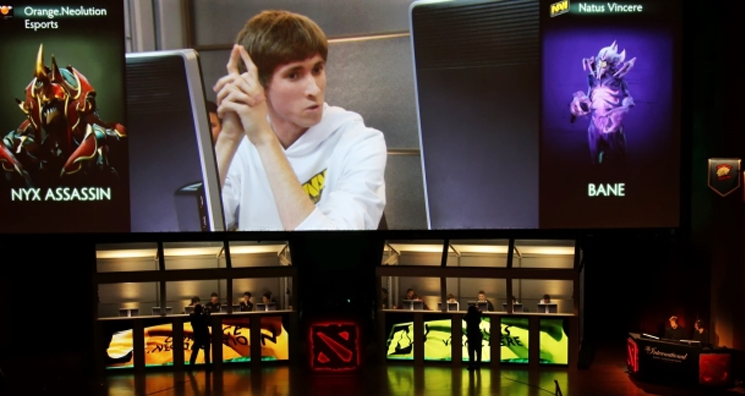 The greatest irony of Burbank’s argument is that it can be so easily applied to traditional sports like soccer and football so easily.  I remember going to my friends’ little league games as a kid and dreading every moment of unskilled and uncoordinated play, but I am at least willing to admit the appeal of watching a professional basketball game.  It’s not about watching some nerds click buttons; it’s about sharing an experience with tens of thousands of other people who share the same passion as you.  I’ve been lucky enough to go to The International, the multi-million dollar Dota 2 tournament which attracts thousands of fans to come in person, as well as hundreds of thousands online, and  I just can’t imagine someone sitting in that arena of screaming fans for more than five minutes and say, “Nope, I don’t understand the appeal of this time-waster.”

Perhaps the most shameful part of Burbank’s segment is the sign-off.  He makes fun of people who play games, insinuating that they don’t understand that in “the real world… you can’t just move people around with your super strength, or jump over things if they’re in your way.”  Honestly, I can’t even make sense of pseudo-sentimental nonsense like, “(the real world) is full of heartbreak and triumph and genuinely terrifying moments.”  I have three games for you, Mr. Burbank:  The Last of Us, Shadow of the Colossus, and Outlast.