The Avatar franchise is one of Nickelodeon’s greatest successes – in terms of both critical reception and audience size – but you wouldn’t know it from how the network has been handling the show’s latest seasons. Season three of The Legend of Korra got slapped with a rushed air date following a serious leak this summer, and was shortly thereafter bumped from Nickelodeon’s network programming entirely (with the remaining episodes put up online). Season four isn’t even being given a chance – it’s airing exclusively online, and despite a near-total lack of marketing, the first episode has been available online since Friday.

It’s a shame, too, because while the first two seasons of the new series were a little uneven, the third season absolutely nailed the balance of goofy fun and gravitas that made Avatar: The Last Airbender one of the best shows in television history. But while Nick seems intent on tossing the actual show under the bus, a lot of the franchise merchandise has been doing rather well. Dark Horse’s run of comics that follow Aang after the conclusion of the original series have proven to be excellent, and Activision has two Korra games in the works that bridge the gap between seasons two and three. One is a 3DS SRPG from Webfoot Technologies – the studio behind the superlative Dragon Ball Z: Legacy of Goku series – while the other is a 3D brawler from the genre masters at Platinum Games. 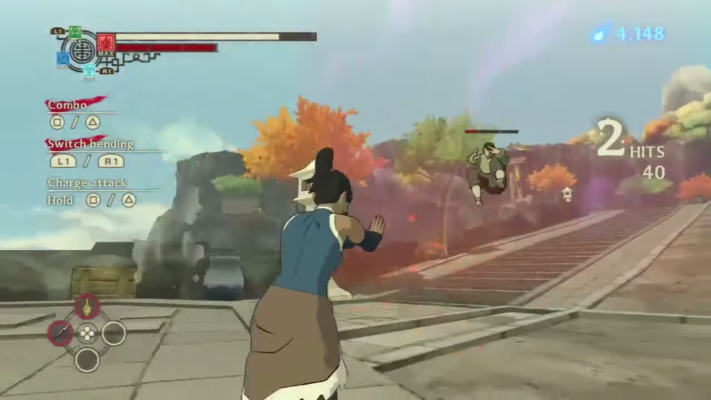 Bending (the ability to control one of the four elements by moving your body) is obviously a large part of what defines the Avatar universe. But it’s not just some kind of generic “magic” – it follows distinct physical rules, and every style of bending is based on a real-world martial art. Airbending is based on ba gua, waterbending on tai chi, earthbending on hung gar, and firebending on northern shaolin kung fu. Opposing styles aren’t just defined by their elemental dichotomies, but by the fundamental differences in how they demand you move your body. Adapting each style into fun gameplay is an extremely technical task – one at which THQ Australia repeatedly failed when they had the license.  Platinum’s experience with brawlers as diverse as MadWorld, Bayonetta, and Metal Gear Rising makes them well-suited to capturing the subtleties of the show.

When you see The Legend of Korra in action, that expertise quickly makes itself apparent. Each bending style feels distinctive and serves its own gameplay purpose. Airbending facilitates fast, evasive movement, waterbending allows you to strike at a distance, earthbending lets you launch slow, mid-range attacks that can stun foes, while firebending allows for swift, direct strikes. As the Avatar, Korra can swap between each bending style on the fly, opening up opportunities for some pretty insane combos. It’s a deep, multifaceted combat system that feels largely true to the show. Over the course of the game, Korra will use these abilities to fight foes straight out of the show, including Chi Blockers, Dark Spirits, and members of the Triple-Threat Triad. 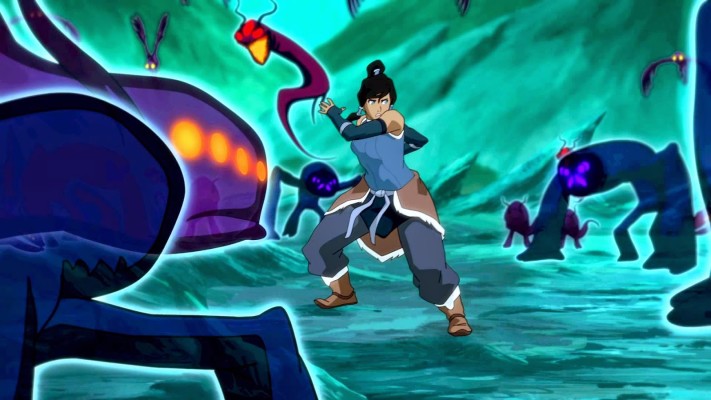 Platinum has also done a great job in capturing the look of the show. Characters aren’t quite on model, and the cel-shader they use isn’t quite accurate, but the game’s backgrounds look astonishing. Running up the steps of Air Temple Island and turning around to see the Republic City skyline and the statue of Aang is damn-near breathtaking.  The game’s story is presented through animated cutscenese courtesy of Titmouse Inc. – the studio behind The Venture Bros. and Superjail – which could easily be taken straight from the show. It doesn’t quite match the new direction that Studio Pierrot took from season two onward, but Titmouse has experience working with the franchise and it shows.

Outside of combat, you can get around using iconic bending moves like fire jets or the air scooter. Korra can unlock new moves as the game progresses by spending the spirit energy that she collects by exploring and beating up enemies. There are also items for sale that can be used to augment her abilities or change the tide of battle. These augmentations should help to keep combat feeling fresh for the duration of the game – which will be admittedly short at only six hours. This is a downloadable game, though, so that length is fairly acceptable, and Platinum are promising plenty of replayability with a New Game+ mode, increased difficulty settings (and this is Platinum, so you know it’ll get hard), and some meat side-content. 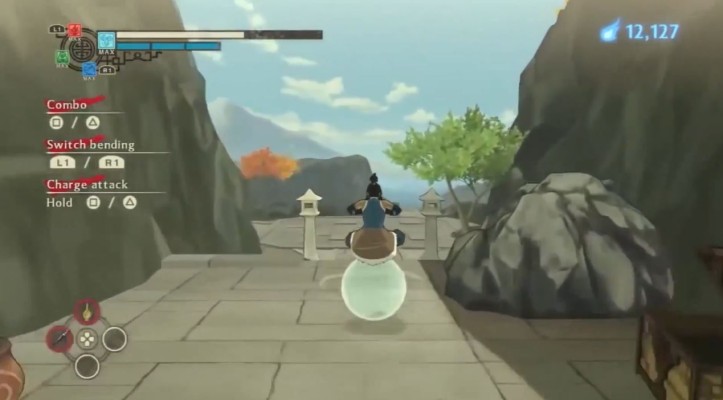 The Legend of Korra introduces two mini games in its run time, both of which become unlocked for additional play when the main story is completed. The Naga running sequences are fast-paced levels in the vein of Temple Run that challenge players to dash through the streets of Republic City on their trusty polar bear dog’s back, dodging obstacles and collecting spirit energy along the way. Pro-Bending mode, meanwhile, is a translation of the pro-bending sport from the show, where teams of three benders (one earth, one fire, and one water) square off to try to knock each other out of a raised fighting ring. The pro-bending episodes were the best parts of the early seasons of Korra, so it’s cool to be able experience the sport firsthand. Unfortunately the mode is single-player only, and only character is directly controlled, so this isn’t quite the pro-bending game fans have been waiting for. Maybe if the game is successful enough we’ll see a spinoff in the vein of Harry Potter: Quidditch World Cup, but for now it’s a nice extra.

Avatar fans will find a lot to love in The Legend of Korra when it releases on October 21, as will hardcore beat-‘em-up devotees. Platinum games have proven themselves time and again with an impressive line of over-the-top action games, and Korra looks to be no exception. This is shaping up to be the best game ever to come out of the franchise.