There are few genres more intimidating than 4X strategy games. A single match in these games can last for days, and just getting to the point where you can comfortably compete with your friends can take weeks of practice. But if you bite the bullet and let these games consume you, they offer unparalleled play value. Top 4X titles are both deep and vast, and you can play them for hundreds, if not thousands of hours and still discover new things. This being the case, French developer Amplitude Studios’ “Endless” series is very aptly named.

Endless Space is a turn-based Sci-fi 4X game in the vein of Masters of Orion that tasks players with building a galactic empire. The game’s lore revolves around the titular Endless, a race of ancient aliens with unparalleled scientific knowledge whose empire fell apart eons ago. For a first effort in such a complex genre, Endless Space was remarkably well-received, and is considered by many to be one of the best 4X games of all time – though it’s not without its flaws. Amplitude followed it up with Dungeon of the Endless, a Roguelike prequel (currently in early access) that sees a group of prisoners and guards trapped in an Endless test facility deep below the surface of the planet Auriga. At the end of that game the prisoners escape to Auriga’s surface – that’s where Endless Legend begins. 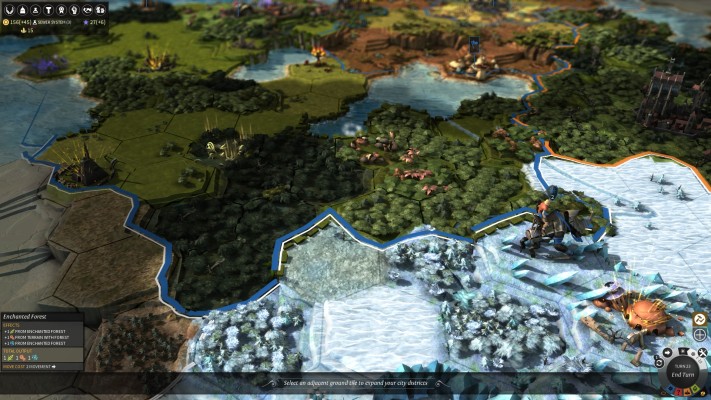 Endless Legend is, technically speaking, a fantasy game. It features Orcs, Elves, Dwarves and Humans (or rough equivalents thereof) vying for dominance in conflicts that often involve swords and sorcery. What makes the setting unique is the way it implements Clarke’s third law – any sufficiently advanced technology is indistinguishable from magic. One of the game’s factions, the Vaulters, is descended from the group that crashed on Auriga in Dungeon of the Endless, and though their time as spacefarers has faded into myth, their destiny is to once again take to the stars (leading into the events of Endless Space). It’s a cool, unique take on the standard fantasy setting, and this game exploits it to its fullest.

By borrowing elements from the Role Playing genre, Endless Legend can be much more story-focused than your typical 4X title. The game makes use of a quest system to direct you toward certain resources and facilitate dealing with minor factions (who will act much like barbarians in Civ until you either bribe them or complete a quest for them). In addition to these randomly-generated goals, each of the game’s eight factions has their own main quest line that nudges their playstyle in certain directions and gradually unveils details of Auriga’s lore. Completing these quests gives players a significant boost in victory points and allows them to make a play for the “wonder” victory by constructing a lost piece of Endless technology. 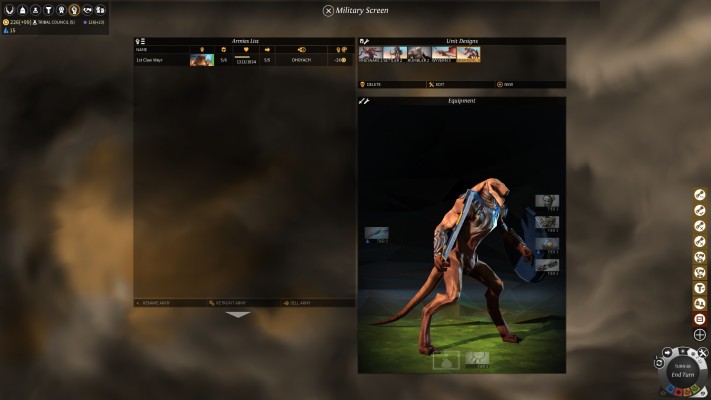 This system is nothing short of ingenious. It effectively turns every random AI game into a proper, structured campaign (if you want it to be) while allowing the flexibility to achieve any other victory condition that might pique your interest. Because each faction has their own unique story, you’re encouraged to give all of them a try, and the game rewards you not just with loot and resources but with remarkably well-written stories. Every faction has their own distinct voice and style of writing that helps to define their culture and personality. The system also carries over into multiplayer, meaning that you can experience narrative content while trying to dominate your friends. Quests give players who’ve fallen behind something to do, and their rewards incentivize leading players to make progress outside of their tech trees and build queues.

Main quests are far from the only thing that differentiates the game’s various factions. Each race has their own special abilities and limitations that define how they play. The ancient Drakken, for instance, begin the game with knowledge of every other faction’s capital city – and thus the ability to make diplomatic moves right off the bat. If they find themselves at a disadvantage in war, they can use their influence to force enemies into peace treaties or even to make them allies. The Necrophage, meanwhile, are a monstrous species incapable of diplomacy that can convert fallen enemies into food and maintain happiness within their cities by sacrificing citizens. Then there are the Broken Lords, a race of living armor that consumes dust (the game’s currency) rather than food to expand its population. 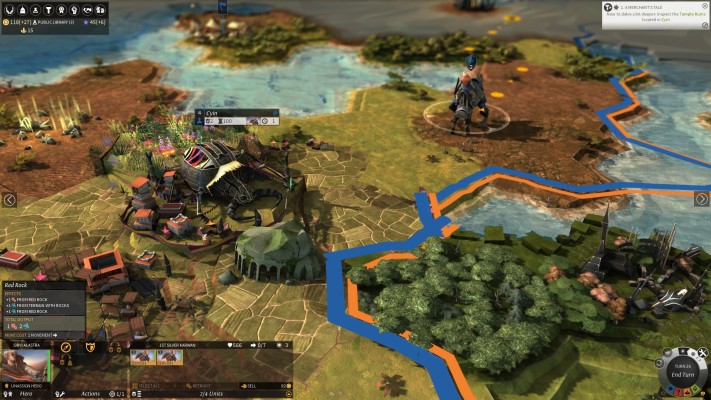 Out of all the game’s factions, the most interesting is probably the Roving Clans, a loose affiliation of nomadic merchants that runs Auriga’s economy. They control the marketplace, where all players can purchase resources and hire mercenaries, and every time a transaction goes through there they take a cut. Their cities are built on the backs of giant beetles –meaning that they can be moved to take advantage of different resources should the need arise. The Roving Clans are not a warlike people – in fact, they can’t even declare war – but it isn’t wise to push them around. They have the ability to lock enemies out of the marketplace entirely, and they can hire stronger mercenaries at a discount for themselves. Playing with them is an interesting exercise in diplomacy and economic exploitation that might well be unique in the 4X genre.

Quests aren’t the only aspect that Endless Legend borrows from RPGs. For a 4X game, it doesn’t give you access to very many military units – each faction has four, only two of which lie on the tech tree. In order to build different units you need to bring minor factions (such as minotaurs or ogres) into your empire. Of course, you can also hire on different species as mercenaries, but the main way to differentiate your units lies in the equipment system. As you research new technology, you’ll gain access to increasingly better tiers of weaponry and armor that can be used to augment your soldiers (at a higher production cost, naturally). Quests can reward you with special weapons that are better all-around, but require limited strategic resources (like titanium) to be made. This system allows you to put a personal touch on your armies, and allows for a remarkably broad range of builds. 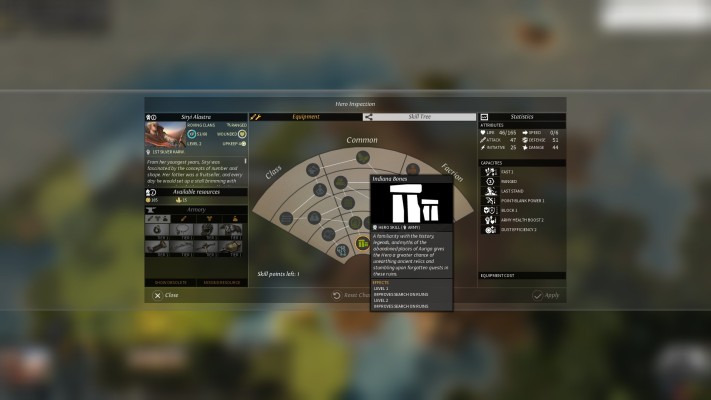 Aside from your regular units you have “heroes,” special characters who, like great people in Civilization, can drastically improve your chances of winning. Each hero counts as a unique military unit when leading an army, but they can also be assigned to cities as governors to provide special bonuses. In addition to having their own equipment slots (in which they can place special hero-only items), heroes have skill trees that improve both their own abilities and those of the units they lead. Because heroes are hired as mercenaries, you’re not limited to a single race – meaning you can build very interesting army combinations. Building up heroes adds an extra layer of micro strategy to an already deep game system, and makes your armies feel that much more personalized.

Unfortunately, Endless Legend is a bit of a drag when you actually take your armies into combat. While your armies move as a single unit during exploration, in battle they break apart into individual units and spread themselves around a small section of the world map. Trouble is, instead of directing them one at a time like you would if you were moving them around the world map, in combat you give all of them their orders at once, after which they move based on initiative stats. This might seem like a minor distinction, but it has some rather unfortunate implications. 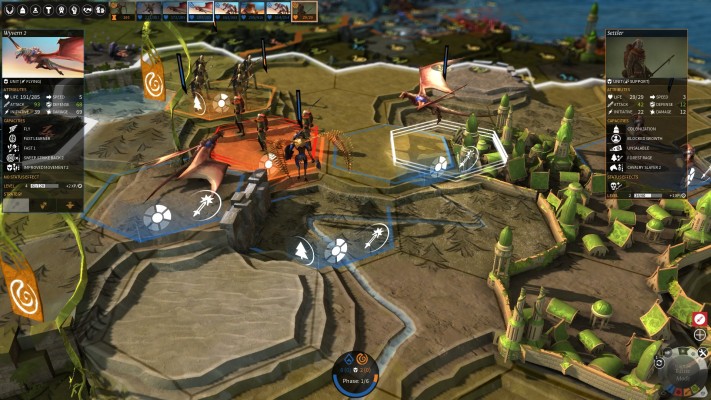 Because you can’t issue precise movement orders to every unit, they can make some absolutely baffling moves when advancing on a designated target or even when they’re supposed to be retreating. Should their target be killed before it’s their turn to attack, units will act semi-randomly, either running away, holding position, or attacking a different foe based on the global strategy you set prior to engagement. Because the game’s AI is brick stupid, this can often result in their deaths and throw your army into chaos. The combat system isn’t terrible by any stretch – there’s a good degree of strategy and nuance involved – but it’s clunky, and considering how big a role it plays in the game that can get annoying fast.

You can spend a lot of time in 4X games just sitting and thinking, and Endless Legend makes that experience surprisingly enjoyable. The world of Auriga is undeniably gorgeous, presented in a style that evokes classic tabletop games. At a distance, the world map is simplified to look like a hand-drawn map, with sketched icons indicating trees, mountains, and special resources. Up close the game world is built from layered hexagons, with a few varieties for each type of terrain. In contrast to the smooth, rolling topography you see in Civ, these tiles look very much like spaces on a game board. This look is enhanced by a tilt-shift post-processing effect that makes the game’s models look like miniatures. The models themselves are a little low-poly and fuzzy, but the art direction behind them is superb. 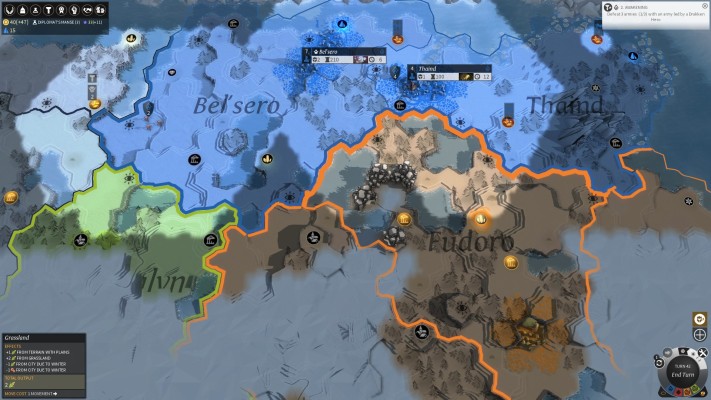 With systems layered upon systems and a strong focus on narrative, Endless Legend is a deep, compelling strategy game that feels distinct from its contemporaries. Amplitude studios are quickly becoming a force to be reckoned with in the 4X market. It’s not perfect — the combat system feels wonky and the empire management isn’t quite as refined as what you’d find in Civilization — but I can see it consuming days or weeks of some players’ lives. Inventive lore, gorgeous art direction and clever use of RPG mechanics make Endless Legend an absolute treat.