Not all video games based on anime are good, but there have been a few – and I’m not talking about obvious stuff like One Piece or Naruto. There’s one character in particular who’s been absent from the spotlight as of late, but that doesn’t mean he’s not worth mentioning. Hamtaro might be a little hamster, but he goes on some big adventures.

If you know the show from back in the day on Cartoon Network, you’ll remember an adorable group of hamsters going on adventures to meet new friends. Hamtaro has appeared in a couple of Japanese arcade games but today we’re looking at his first ever appearance on the Game Boy Color– Hamtaro: Ham-Hams Unite!

Now, I’ve never been one for brutal games or shows, especially in my younger years. I was more interested in cute, colorful things, which led me to watching Hamtaro. Because I enjoyed the cartoon so much it was only natural to get the game. Ham-Hams Unite isn’t difficult – there’s no real need for skills or strategy. All you do is run around town trying to get all the other hamsters back to your clubhouse. To do so you need to fill out a dictionary of the hamster language – Ham-Chat.

Every word you learn corresponds to an action performed by Hamtaro. Some words are self-explanatory: Tack-Q lets you tackle an object, while Digdig means you’ll dig at the ground in front of you.. Whenever you choose one of these actions, something could happen. If you Digdig in the right spot you might find a sunflower seed or a rock. If you say one word to a hamster after a certain event, you can learn something new. 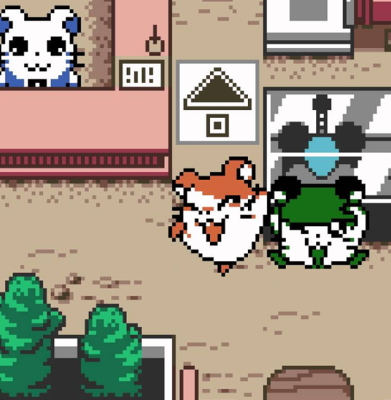 As you explore various locations around town, such as the clubhouse, the park, the market and an elementary school, you’ll run into a few of the Ham-Hams. Some will return to the clubhouse without fuss, but others take a bit of encouraging. Maybe you’ll have to buy something or complete a task to convince them. This makes it so you have to explore and get to know your friends.

There’s plenty to collect around the various levels. On top of Ham-Chat words, you’ll need to locate items. Scattered around the game are sunflower seeds, rocks, acorns, stars, and even outfits to wear and dance around in. Some of these serve a purpose, while the others are just for fun. You’ll have to perform certain actions or say the right thing to find them all.

For me, the best part of the game wasn’t the collecting or learning words. In fact, I think I’m still one word short. My favorite thing in Ham-Hams Unite is the inclusion of all the hamsters from the show. Their portrayal remains true to how they act on TV, and the detailed animations bring their personalities to life. This game is mainly for fans of the show, but it has an undeniable charm. When I first played it on my old purple Game Boy Color, it was just a window into a show I loved, but looking at it with a more critical eye, it’s a solid adaptation that captures what makes that show so enjoyable.