It’s hard to believe that over three years ago, Sleeping Dogs was actually being developed as another True Crime game. For whatever reasons, Activision decided to shelve the project, only for Square Enix of all publishers to snatch it up and change the name. This was a joyous occasion as, while most True Crime titles have been less than compelling in the past, it was a setting not too familiar with most modern western video games. While the PS3 and Xbox 360 versions were perfectly fine releases, they lacked the visual fidelity the PC version had. Thus, United Front Games and Square Enix have decided to bring all the glamor of the PC version to the new set of consoles, while adding additional content, as well.

The story revolves around Wei Shen, an undercover officer from San Francisco who was born on the streets of Hong Kong. After his sister Mimi died of a drug overdose, he goes back to his birthplace to do some good and take down the Triad sector, Sun On Yee, piece by piece. The set up to this high octane crime drama is absolutely enthralling, and this is thanks to the large cast of characters that populates it, from Inspector Tang to Jackie Ma. Unfortunately, the problem is that the story is spread out a bit too thin, causing everyone outside of Wei to get the short end of the stick. There are appealing new additions and cameos all throughout the campaign, but they are used for a very short amount of time and then disappear altogether. It’s an exciting tale that will keep players interested all the way through thanks to the solid storytelling techniques, but unfortunately the potential is somewhat wasted as you won’t care about anyone other than Wei. 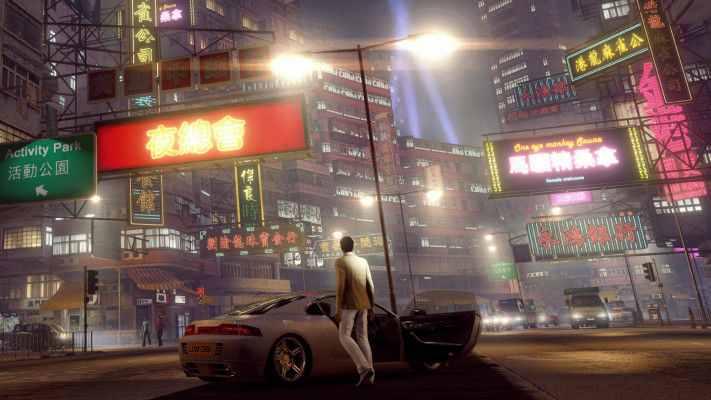 While most open world action titles such as Grand Theft Auto and Saints Row strive for better gunplay, Sleeping Dogs is all about martial arts. Hand-to-hand combat is a strong focus for the game as almost every encounter will require Wei Shen to beat up a group of enemies with mechanics much in line with the Arkham series, just a little less floaty. It’s a simple system that contains light and heavy attacks, a counter button, and a grapple. There are three sets of leveling trees to be gained, Police, Triad and Face, all unlocking new moves and more capable Wei Shen. Collectables have also been nicely tied into progression as praying at shrines scattered across the map will increase Wei’s life bar, while collecting ancient statues will unlock new moves at the gym. It’s an incredible smart system that ensures scouring Hong Kong isn’t just a useless chore for competitionists.

It’s also something to mention that the combat in Sleeping Dogs is one of the most impactful and gritty systems to be found, breaking bones and performing actions that will surely send the recipient to the hospital or grave. It’s not how Wei puts his fist through someone’s head, but the environmental factors around him. Something closer to Jackie Chan fighting, just to a much deadly degree, Wei can perform multiple environmental takedowns with the various objects around him. This includes crushing enemies with an engine, impaling them with swordfish heads, or the worst fate yet, drowning them in a urine soaked toilet. There’s a strong variety for what can be done to dispose of enemies, and it’s up to the player to find the most creative ways to do so. That isn’t to say that Sleeping Dogs doesn’t have its share of gunplay as there are various pistols, SMGs, shotguns, and assault rifles to be obtained later in the story, and they definitely become prominent in specific missions. Still, though, even with the Max Payne-esque slow motion ability, hand-to-hand combat is far more enjoyable, and with the open world parkour free running, and you have yourself one of the best martial arts video game out there. 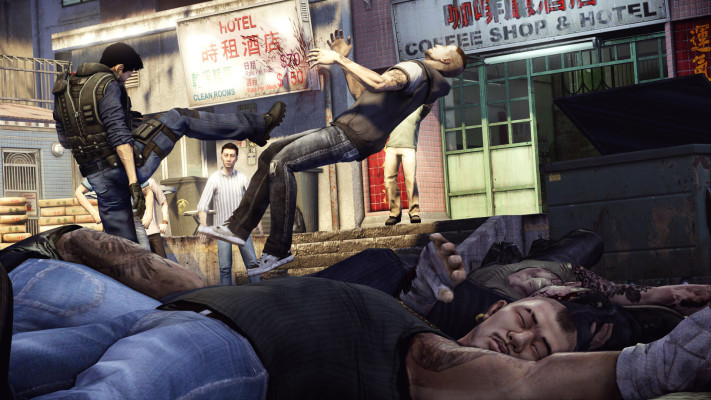 As an open world game should, driving is the large component for traversal. Sleeping Dogs is especially arcadey as it’s not only about drifting around corners, but slamming into other vehicles with a single button click. In addition, while Saints Row III found a way to enter vehicles quickly, Sleeping Dogs has a way to jack cars mid-drive by hoping onto the roof, as ridiculous as that sounds. Regardless, the driving mechanics here are enjoyable, even though it will take the player some time to get used to. Looking past the shooting, martial arts and driving, there are various other things to do in the world. There’s a minimal, yet somewhat challenging, rhythm game in the form of karaoke, hacking mini-games, races and so much more. Hong Kong is filled with life, and being on the side of both the law and the Sun On Yee, there’s no shortage of activities to partake in. With the Definitive Edition, players will have access to all the downloadable content released throughout 2012, and into early 2013. This includes, most prominently, Nightmare in North Point, Year of the Snake and Zodiac Tournament. Unfortunately, it’s only the side mission packs and clothing items that have been implemented directly into the main campaign, with the primary three pieces of DLC coming as out of context selections in the main menu.

Visually, Sleeping Dogs: Definitive Edition is without doubt significantly improved over its last generation counterpart. It runs at a much higher resolution and includes various visual effects that were not possible on older systems. The difference in comparison to the PC version, however, is not as grand as there’s only minor differences that have been added. This includes filling the world with more people and vehicles, making the streets of Hong Kong even livelier. Lighting has also been tweaked slightly, giving off better illumination during night time, and tying that in with the increased fogging, it adds a nice subtle effect. Unfortunately, that’s basically all the prominent differences as the world itself still looks somewhat crummy during the day time and some of the character models are less than desirable. It’s definitely an experience you can tell was crafted for the last generation, but it still holds its own in the current market. It should also be noted that, at least for the Xbox One version, the frame rate can be all over the place. In most spots it’s smooth, but in others it will be a bit jerky, not necessarily slowing the game down to a halt, but enough to get spotted. 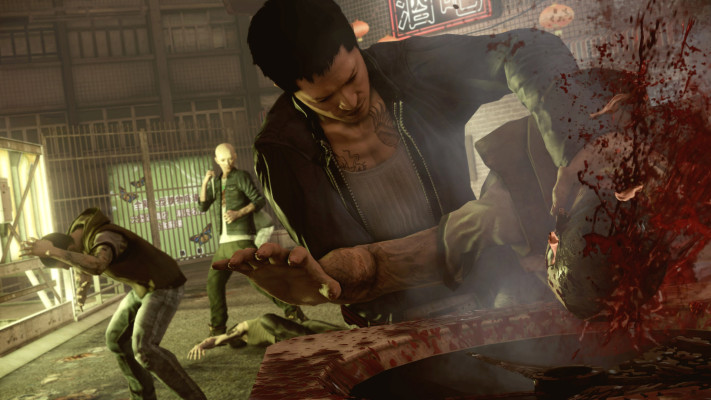 For those who missed out on Sleeping Dogs two years ago, the title is correct: this is the definitive version. Unfortunately, those who already visited the compressed streets of Hong Kong will have almost no incentive to go back. All of the downloadable content that was slowly rolled out post-launch is included here, but they’re not worthy of your time to begin with. The upgraded visual effects add to the overall atmosphere of the fantastic brooding story, and the action packed combat will have you coming back for more, even though the driving mechanics will take some time to get used to. While the landscape for open world action titles has changed drastically over the last two years, somehow Sleeping Dogs remains a diverse and highly impactful experience.