When Hotline Miami came out, I lucked into getting it for review and getting in on the ground floor of a very special gaming experience. The overhead twin-stick shooter became a PC and console darling over the next two years. Now, Team2bit is taking the core concept of an overhead strategic shooter and putting a Cold War spin on it. In this alternate universe version of the mid ’80s, Ronald Regan and Mikhail Gorbachev have been kidnapped and they have to team up to escape. Gorby’s a master hacker and a blowdart expert, while Ronnie’s prepared to attack with a sword and your go-to guy when it comes to gathering keys. Together, these two rivals must be bad enough dudes to save the Presidents — themselves.

The idea of a single-player co-op version of Hotline Miami can be tough to wrap the mind around, but it winds up working well in execution. The right bumper switches between the characters while the left has the other follow behind. This AI-controlled character can attack enemies, but can be a bit slow with the trigger finger. As a result, trial and error is necessary to figure out which character is best at certain parts of the stage and then having the other character stay back a bit. Holding U/X on a 360 pad and moving the left stick lets you pause the action and survey the entire map. Doing this allows you to visualize what to do and how to attack each enemy. 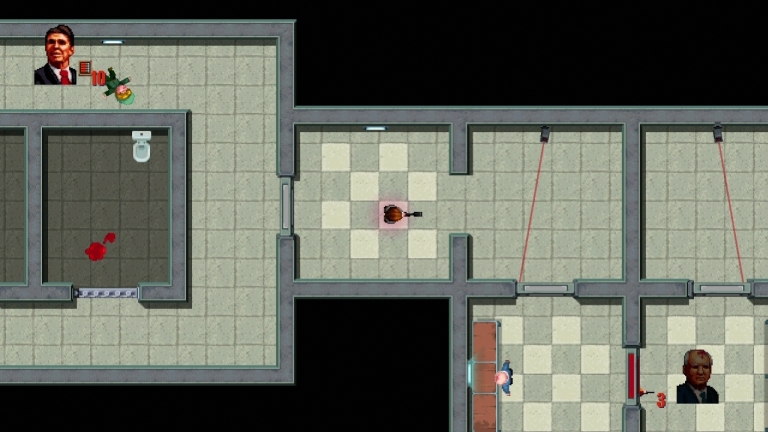 If you’ve just got one enemy at a distance, perhaps with a large blast-radius missile near him, then a gun is going to be the best bet. Failing that, Gorby’s blowdart can work in a pinch and he can pick up fallen darts to always have ammo. Going into a small room with multiple enemies is generally a job best done by the creator of basic Reaganomics himself. Going back and forth between them is easy, and the use of the left stick to move, right stick to aim, and right trigger to shoot is logical and easy to remember. Unfortunately, the OUYA pad’s occasional hiccups can cause some deaths as you’ll just move around without touching anything during random points. Using either a wired Xbox 360 or wireless PS3 pad can remedy the problem though — so be sure to have one on hand just in case.

Aside from that control problem, the game is a joy to play. Movement and actions are responsive and the blind of bloodshed and puzzles is perfect. You’ll go through a section with a lot of combat, then slow things down with puzzles. You may just need to have one stand on something to open a door and then have the other attack, but there will also be times when you have to combine that with avoiding laser beams (frickin laser beams!). Environmental hazards like missiles can be used to your advantage or lead to your downfall — eliminating them in a particular order can take more time, but also blow up more enemies. However, going for a speedy approach can lead to more direct combat. Each kind of kill is thrilling in a different way and replaying the stages is fun to see just which approach results in the fastest completion time. The game doesn’t operate on a star system for performance, but it is clearly designed around speedrunning. Even as someone who isn’t a speedrunner, I found myself becoming obsessed with being as efficient as possible, even if it meant just changing a small thing like which angle I came at a puzzle or enemy from. You start off just wanting to do that for a particular room, and then set to do that for everything once you’ve beaten the stage. 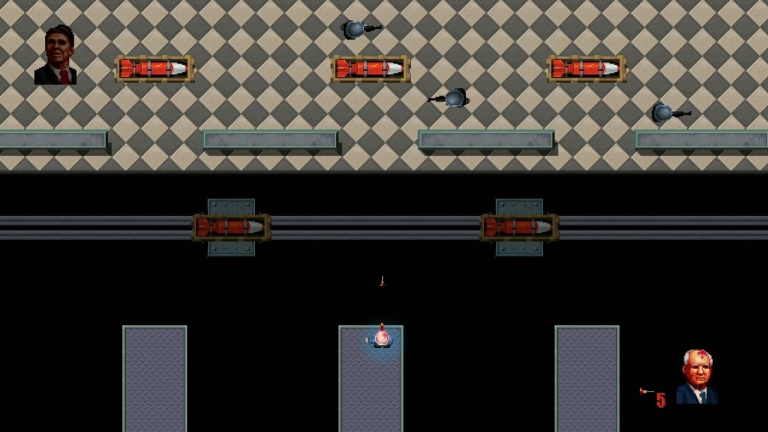 Visually, Reagan Gorbechav looks solid, but it doesn’t impress in many ways. The animation is perfectly limited given the genre. With a game like this, where every frame counts, it’s important to be able to predict things with the naked eye. The animation is a few frames at best and that makes it easy to imagine exactly when things should happen before you do them. Environments have a lot of details to them, but not too many that things become distracting. Items moved around to reveal keys actually have some animation and don’t just slide around like a tile. It adds a bit of weight to things, and that works at making the world seem a bit more real. Cutscenes perfectly replicate the 8-bit style, but use a more diverse color palette — like something out of an early ’90s NES game. The same goes for the between-level quizzes too, which combine with quotes from each man to entertain and inform as well.

Musically, Reagan Gorbechav varies from Hotline Miami‘s intense and raw score to deliver something that is a bit more upbeat. It’s very pop-oriented, with traces of modern music in there but only because the current era is so influenced by the ’80s. The soundtrack varies between intense to subdued, so if you’re in an action-heavy area, expect pulse-pounding songs and slower-paced stuff when you’re in a puzzle-centric stage. The game’s sound design is fantastic with things like ambient background noise really absorbing you into things. If you’re in a factor, you’ll hear a ton of metal clanging and things being assembled. Weapon blasts were also impressive because of just how different they were. The blowdart sounds low-powered, but something like a shotgun blast is so loud you can almost feel it even without vibration in the game. 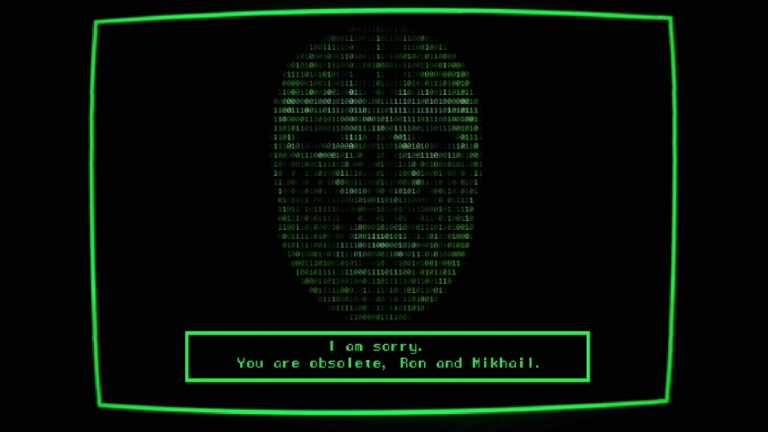 Reagan Gorbachev takes the Hotline Miami formula and mixes it up with co-op action. Character swapping is seamless and results in a thoroughly enjoyable experience whether you’re shooting, slashing, or puzzle-solving your way to victory. The controls are hampered a bit by the OUYA controller, but PS3 and 360 pads work just fine. The game is largely satisfying visually, although the graphics aren’t going to blow you away. The soundtrack is diverse, but falls to second place compared to the overall sound design thanks to impressive sound effect work. Simply put, those who loved Hotline Miami or even Zombies Ate My Neighbors should give Reagan Gorbachev a shot.