You’d think being a young pink panda living in a candy-colored jungle would be easy.  The days are sunny, the world is warm and friendly, and JUJU’s father Jambee is the kind of shaman who waves a friendly hello to a family of ladybugs on the way to performing his rituals.  It’s hard to get much nicer than that.  It only takes the wrong action at the wrong time, however, for JUJU to accidentally screw up his father’s work and release an evil bat spirit to menace the land.  Jambee manages to slip his son an enchanted wooden mask before getting nabbed, however, so with a bit of luck and a lot of platforming JUJU just might have a chance at being less of a screw-up.

JUJU is a new classic-styled 2.5D platformer from Flying Wild Hog, better known for their work reviving the gore-soaked Shadow Warrior.  In a complete change in tone their next game is a family-friendly platformer filled with cute characters, charming enemies, and more bright colors than you’d think a screen could hold.  It’s a game designed from the ground up to be family friendly, including a jump in/drop out co-op mode where an adult can help a younger player past the tough parts.  Generous checkpoints and infinite lives keep frustration at bay, but that doesn’t mean JUJU is overly simple. 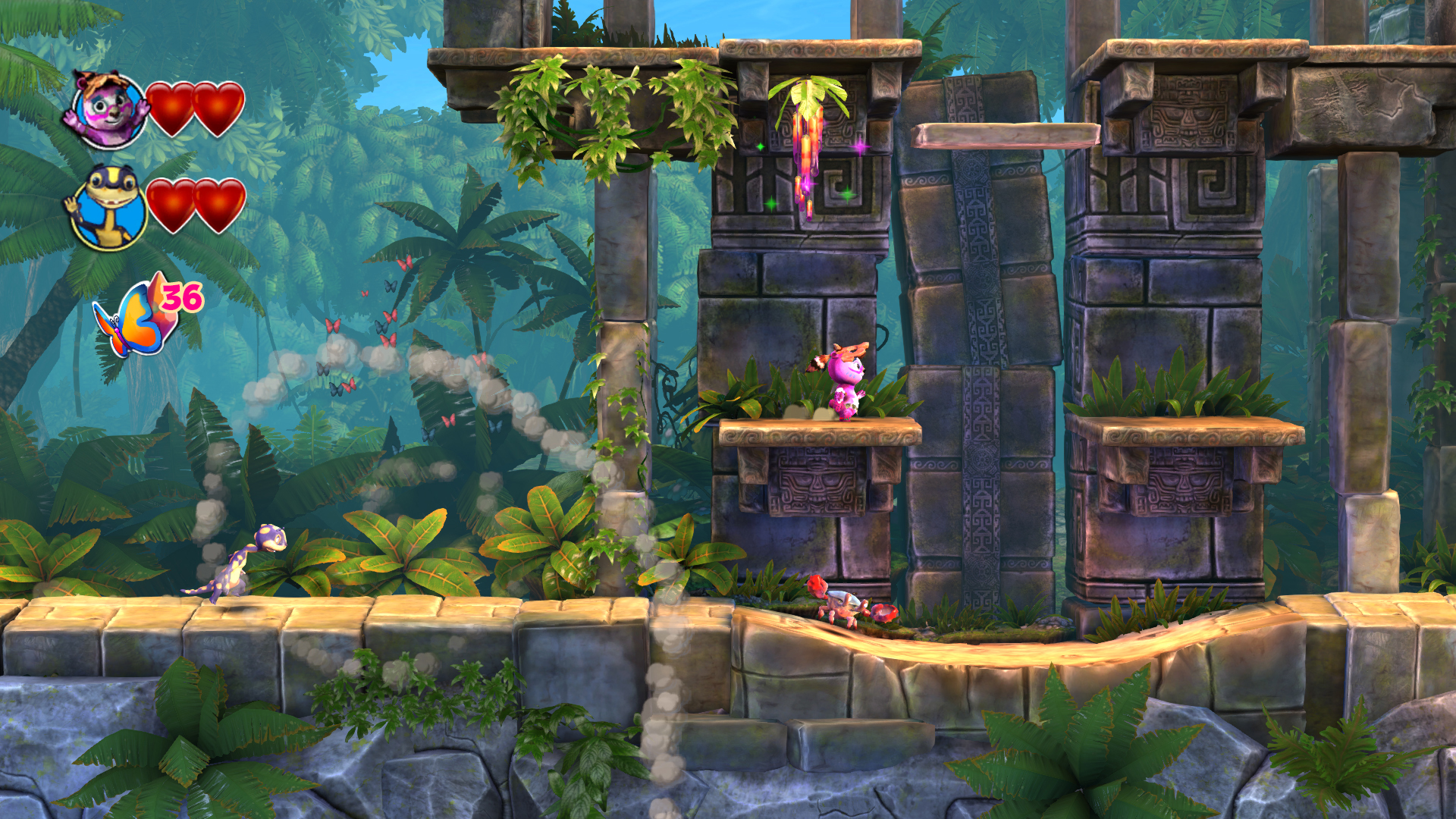 JUJU starts out with a few abilities.  Jumping, obviously, but the mask also grants him a dash move that can also be used either on the ground or mid-air for crossing large gaps, plus a drumming move that can open up parts of the level scenery and make enemies dance.  That first two abilities are free but the others have to be earned by beating an area’s mid-boss.  Each area is comprised of six regular levels with a boss fight at the halfway point and a rematch with an amplified version at the end.  Beating the mid-point boss earns a new ability, such as hover jump or ground pound, and while they’re old, familiar skills JUJU isn’t out to reinvent the wheel.  It’s an all-ages game designed to be welcoming to younger gamers, so it’s not messing around too much with complicated mechanics.

While it’s pretty straightforward as platformers go, my play time with JUJU was actually decent fun.  Not every game needs to be dripping in badassery to provide a good time, and while the cuteness got a little strong at times it never thickened into pure treacle.  The level design has some nice secrets that won’t be too hard for an experienced gamer to find but should be nicely rewarding for kids, with extra crystals and bonus rooms scattered generously throughout the levels.  A good platformer lives and dies on its controls, though, and JUJU’s are serviceable if a bit loose.  If checkpoints were less frequent or the penalty for the rare death more severe that might be a problem, but usually the penalty for a missed jump is pretty light.  It’s not all a forgiving challenge, however.  Once you’ve beaten an area each level within gets a time attack mode, and beating the challenge time is nowhere near as easy as simply getting through the level was. 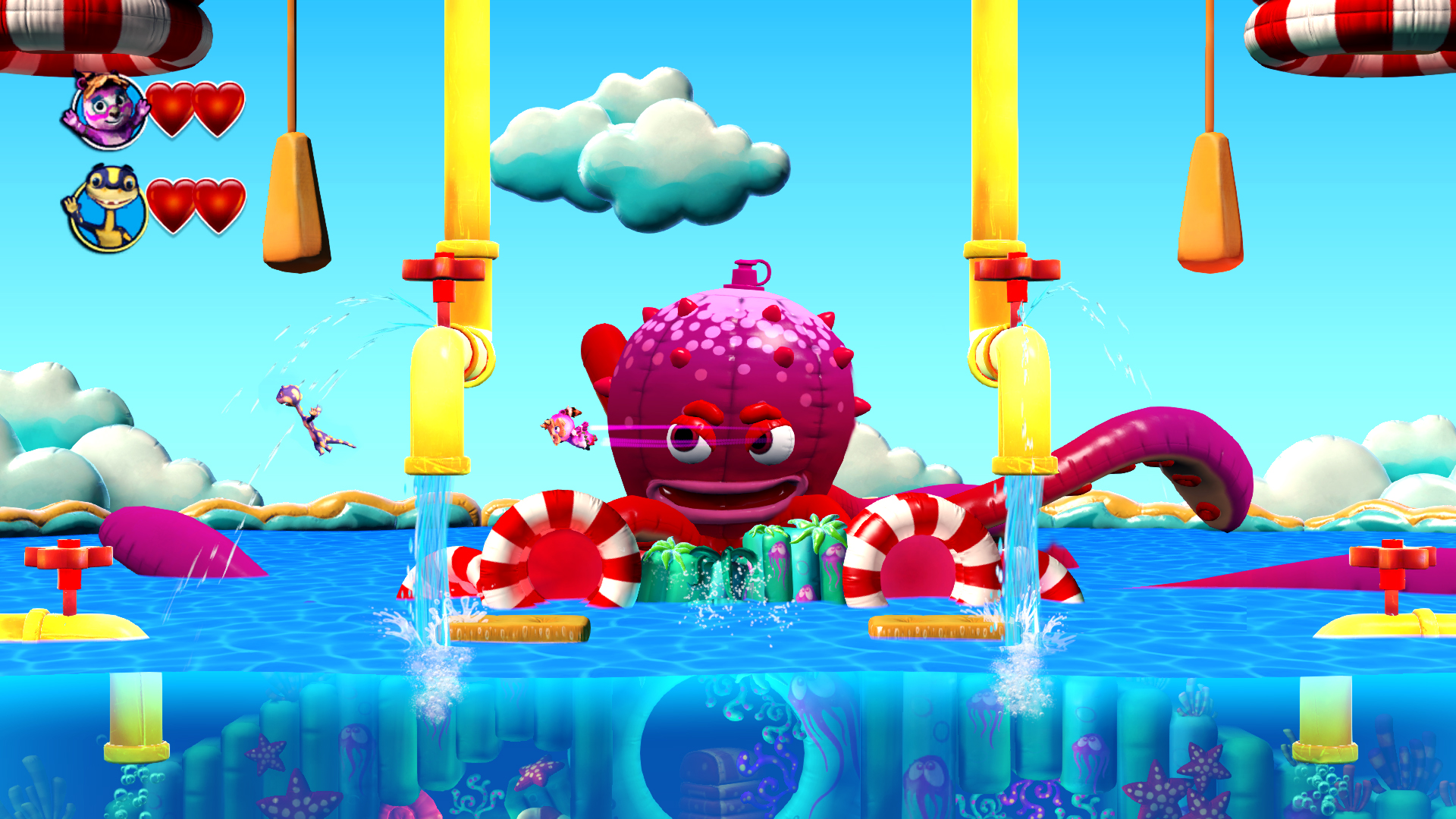 JUJU is aiming to be a game for all ages, and if it skews a bit young there’s still a fun time in there for for an adult.  Whether that time ends up being spent playing with a child or going solo depends on one’s tolerance for brightly-colored and relentlessly cheerful gaming, of course, but just because JUJU platforms through worlds made of wooden blocks or inflatable beach toys that’s no reason to pass on some classic platforming action.  It’s hard to be cynical when playing such an upbeat, happy game, and JUJU succeeds as much by being pleasantly inviting as it does by being an enjoyable bit of gaming.