Pix ‘n Love Rush was a big hit during the PS Minis phase of PSN. Now the adorable little cat is back with something a bit different, eschewing platforming for a blend of Pac-Man and Snake. They’re two kinds of gameplay you wouldn’t think to put together, but wind up meshing perfectly. Beyond the unique premise, Pix the Cat stands out by having the next level visible right away. Every stage features the larger section you’re currently playing on as well as a smaller thumbnail-sized version of the stage you’ll be in next. It’s an interesting stage setup that winds up fitting the game’s premise well.

The objective is to guide Pix around and grab eggs; each egg will cause a duckling to walk behind him and much like Flicky, they need to be intact for a huge score bonus. If all of the ducklings  aren’t brought to their eggs in one shot, the egg they go in will crack and lower the score. The longer score multiplier going is maintained, the easier it will be to get into Fever Mode. Fever mode turns everything into almost a reverse X-ray look with white and a secondary color like green, blue or purple overcoming the screen and everything almost taking on a Game Boy-esque appearance. 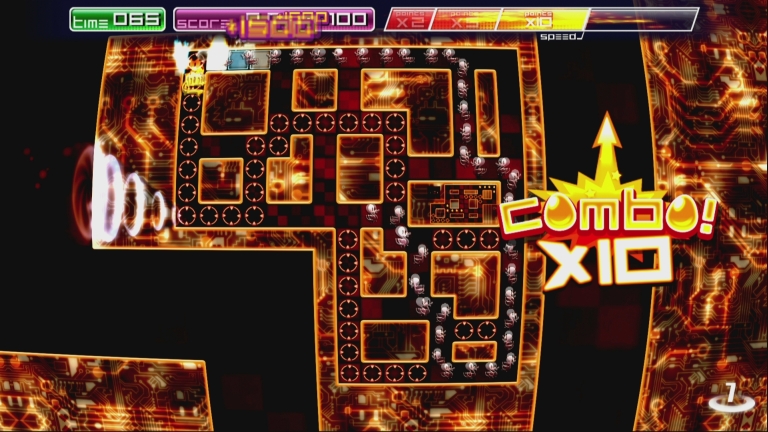 In Fever Mode, more points can be racked up and finally be able to have Pix eat the skulls that inhabit the world and can also end his multiplier. Likewise, winding up with too many ducklings in a bad spot will force you into a corner with no place to go — nixing the multiplier and ending the lives of the poor ducklings. Any that haven’t been caught can still be saved though, so it’s best to approach that kind of situation as a learning experience rather than a disaster. Each screen brings about its own challenges with some forcing the patterns to be memorized as there’s always a way to have a perfect run — it’s just up to you to discover it.

Sometimes, the path to 100% perfection on a board is mapped out as there’s only one solution, while others require tight controls and shifting around perfectly during long rows of ducklings. Then there are the tricky boards that are built around trial and error. Odds are, these will take many failures to conquer, but when you do, you’ll feel a sense of accomplishment and  gain a sense that you have just ruled over this game. There are twists on the main “arcade” mode, with Arena offering up a multiplayer battle mode where you go around a small area and throw eggs at opposition and a Nostalgia mode that gives you a set limit of moves to make and it’s up to you to get all of the ducklings to their destination while ragtime music and a black and white world full of fill grain sets an early cartoon mood just about perfectly. 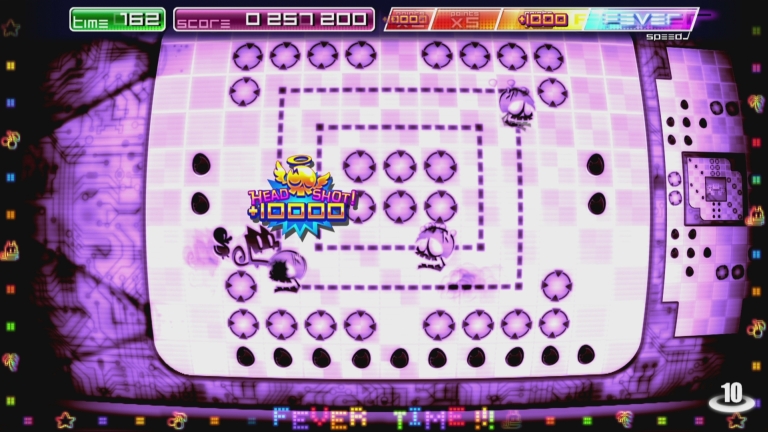 The core game is identical on PS Vita and PlayStation 4. Colors appear a bit sharper on the original Vita’s OLED display than they do on an average TV, while the d-pad heavy controls are a little nicer on the portable as well. Personally, the DualShock 4 being more comfortable made extended play sessions far more fun on that the PS4 than the Vita, but since it’s a Cross-Buy game, you’re not dealing with Sophie’s Choice here. One version is perfect for home play, and if you’ve got some friends over and just want to kill some time, then you’ll make due with the Vita version at home and be thankful for it when out and about. You may get some odd glances thrown your way for swearing when you’re 10,000 points shy of a million, though. Pix the Cat has that “just one more game!” mentality stitched into its core where you start just wanting to kill a few minutes, and then sink an hour into trying to get the perfect game. It’s like bowling without the rented shoes and questionable pizza.

Visually, Pix the Cat is stunning. Colors pop off of the screen on each version and boy is there ever some variety to them. The core game will alternate between between blue, green, purple and the like. During Fever time, you’ll be surrounded by even more color. Beyond the inverted color scheme, the entire screen is beautifully bordered by colorful text and icons. It’s obvious that a lot of care went into the visuals, and that goes for more than just seeing the stages before you enter them. There’s a lot of detail in everything from the egg containers to the skulls and especially the circuitry that surrounds the stage.

The sound design is impressive as well. There’s a wide variety of announcers to choose from with each adding a different layer of comedy to the goings-on. The lady bot has a seductive, yet sarcastic, tone while the rage quitter is just perfect. Musically, the mechanical/techno soundtrack blends in perfect with the action. Whether things are slow-going or ramping up, the music reflects it. 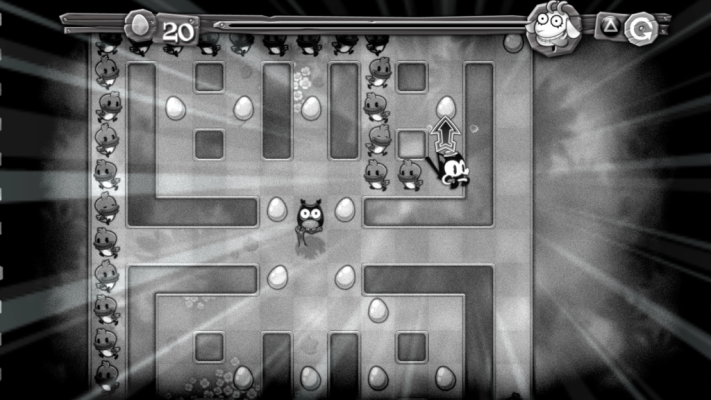 Pix the Cat continues PastaGames’ reputation for making incredible bite-sized gaming experiences. There’s even a surprising amount of depth here thanks to its multiplier and variety of game modes. Those who grew up loving Pac-Man and Snake should give Pix the Cat a shot. It’s got a similar level of addictiveness and should scratch the itch of anyone looking for a retro-styled, but modern-feeling, game. Pix’s outstanding controls, graphics and sound design underscore an experience that any Sony system-owner should enjoy. Luckily, it’s a Cross-Buy game so that should be easy.