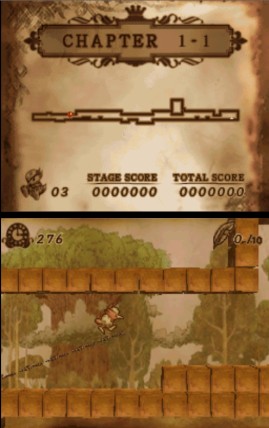 Yuji Naka, the father and of Sonic the Hedgehog, made a bold decision to leave his comfort zone sometime during the development of Sonic the Hedgehog (the panned 2006 Xbox 360 reboot) and form his own studio called PROPE. This move almost mirrors Hironobu Sakaguchi’s departure from Square Enix, but PROPE has yet to leave a mark on the industry in the same way as Mistwalker. PROPE has been steadily releasing casual gaming experiences since its formation, and perhaps its most mainstream and memorable creation so far has been Ivy the Kiwi? for the Ninetendo DS and Wii. A puzzle platformer of sorts, Ivy the Kiwi? is best experienced in portable form.

Ivy the Kiwi? won’t change your life the same way Naka’s own Sonic the Hedgehog (the Genesis classic, not the last-gen train wreck) did back in 1991, but it will remind you of the creative genius that designed the likes of NiGHTS into Dreams and Burning Rangers. Like those games, Ivy the Kiwi? brims with creativity and originality. In this game you passively control a newly hatched kiwi chick who is in search of her mother. Ivy charges forward full-bore and pays no heed to anything, so it’s your job to passively guide her through the many levels.

The stylus is used to draw vines, which generally serve as makeshift platforms and paths for Ivy, though they can also be stretched to launch her like a slingshot. The gameplay is simple yet very varied, with each level offering interesting platforming challenges and clever environmental puzzles. It’s a really fun game that can be enjoyed in short bursts, with bite sized levels encouraging several playthroughs to shorten your time and increase your score. Ivy can reach breakneck speeds at times, so you have to stay on your toes to keep up with her and protect her. Her impatience and haste almost feels like an homage to Naka’s most famous animal mascot.

Aesthetically and musically Ivy the Kiwi? will still charm you with its soft and adorable storybook presentation. You’ll likely blitz through the game in a couple of sittings because of how engaging it can be. It has the compelling blend of challenging gameplay that we expect of Naka, and serves as a reminder that the industry legend still has more tricks up his sleeve. It will never be a landmark series like Sonic or NiGHTS, but Ivy the Kiwi? is one of those high-quality niche games that you can proudly display as part of your DS collection. There’s a Wii version too, but the game functions best on DS hardware. While collectors will prefer the retail version, you can also grab a lite DSi edition of the game, which is still available for purchase on the 3DS eShop.