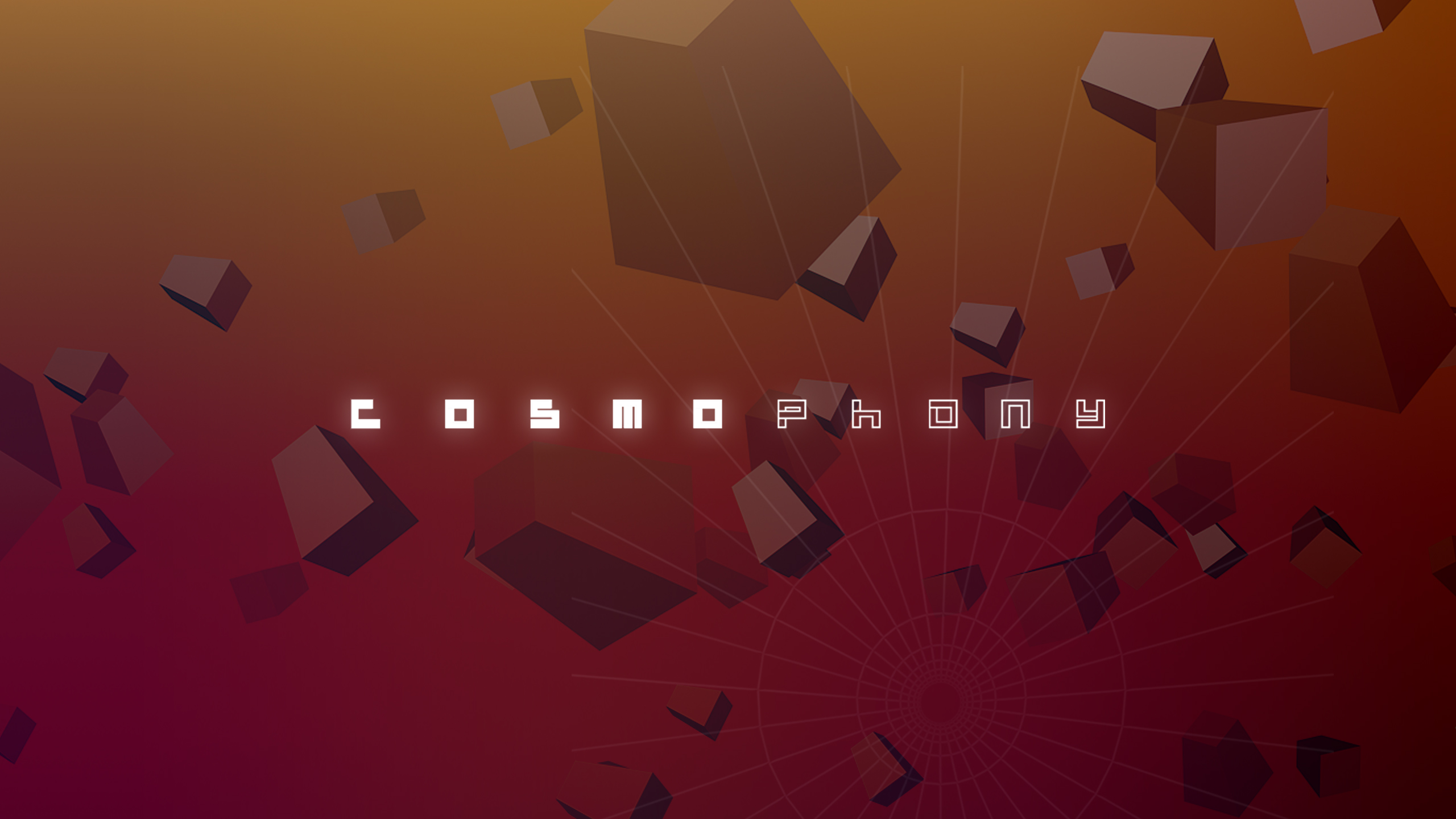 Cosmophony is no stranger to iOS and Android device users, but the Wii U release marks its first console release. The obstacle-based endless runner features one of the darkest plots you’ll find out there, with a celestial being attempting to keep harmony in the universe but failing. As a result, she’s been imprisoned in a crystal and tasks you with completing the job she failed to do.  With her heart being bestowed upon you, you’re able to bring balance to the universe. How? By attacking enemies and dodging a great many obstacles while things occur in the background.

The overall look of Cosmophony evokes Rez with its extreme color saturation and seemingly simple premise. Whereas that is an on-rails shooter, this is a fast-paced action runner with a blend of shooting thrown into the mix. Normally with a runner, you don’t want anything else cluttering up the action, but the merger of the two genres is fairly seamless. Using either the d-pad or the left stick, you can move around while B or A shoot. Controls are nice and responsive, but since it’s a twitchy experience with precise directional movement needed, the the d-pad will ensure a more pleasurable experience. Shooting with either button is fine, but B was faster to tap for me than A was given the d-pad setup. 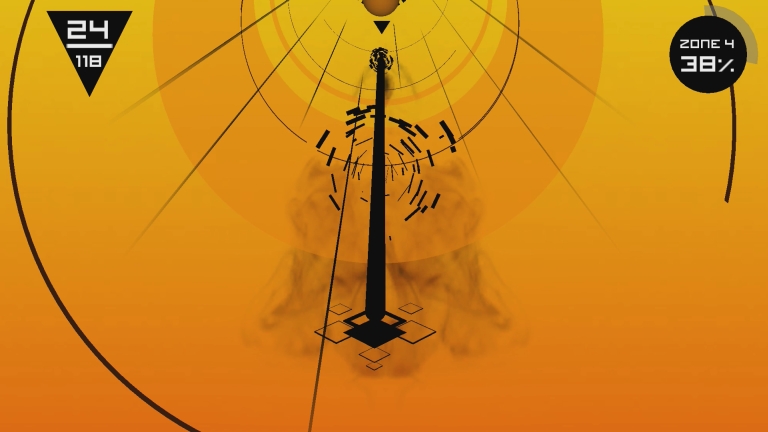 Cosmophony‘s concept is deceptively simple, but the key behind everything is mastery of the game. You’re given a quick tutorial and can then practice a stage as much as you want. In this mode, time can be rewound or fast forwarded through something already played using the left and right triggers. Checkpoints are handed out liberally and the challenge mainly lies in figuring out patterns. You’ll want to learn not only where enemies are, but pay attention to where they are in relation to the environment. Sometimes, the enemy layout gives you a clearer view of the ideal path, but that path can be much harder to traverse. Going the easy route and avoiding enemies may seem like a solid idea, but you’ll wind up with a less-rewarding play session as a result.

Beating the practice mode should give you the confidence to try out the normal game and that is where the true challenge lies. Here, you have no rewinds or checkpoints. You have get through the entire stage in one shot — so reaching the 35% level and then having a checkpoint take you back to 30% with minimal backtracking isn’t an option. As a player, you can opt to just try and tackle the game in  normal mode since that’s what you’ll have to conquer to progress, or you can spend more time learning the layout and then hopefully faring better in normal mode down the road. Personally, I found that I had to try out every stage on normal at least once to see how far I could get, and then check out practice mode to learn with some assists. Similarly, you can also die a bunch and have a basic bumper car run where you’re immune to most damage — however, you don’t get any progress or scores counted unlike practice mode, so you’re better off just staying with that. 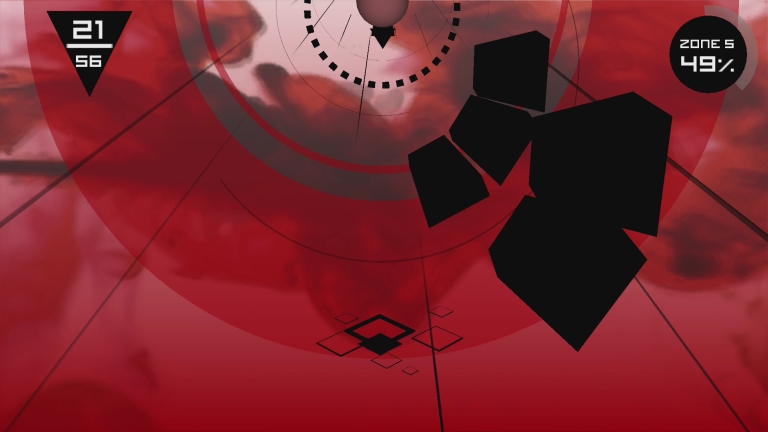 Cosmophony keeps the score attack-style of addictiveness intact despite not really being a score-based game. You’re given a running tally of enemies killed versus the total amount in the level, but the most you can get for a stage is four stars — two for practice and two for normal mode, with a star being given out for 100% enemy killing and stage completion. It’s easy to set a base goal at beating a level and then getting so hooked that you want to get 100% completion because you’ll have mastered that map. It’s much easier to try and fully conquer one level then it is to beat it, then try another stage and go back to attempting 100% completion. You’ll get just a bit closer each time and then feel such a sense of satisfaction when you’re able to string things together and have that perfect run where you not only beat the stage, but do so while beating every enemy. It’s like climbing a mountain, with more of a visual mind screw.

Cosmphony‘s graphics bathe your eyes with one extreme background color that quickly becomes how you mentally-define a certain stage. Multiple shades of a particular color will be used, with various filters placed over it from time to time. There are also a lot of things going on in the background. While you’ll be tempted to be distracted by them, you can’t allow that to happen as death will surely soon follow. The second stage, for example, is heavy in red, but then shifts things quickly to a red and black mix with the background filling up with gauges. They don’t appear to be of any importance, but they’re still there drawing your attention away from hazards. You’ve got to shut those distractions out of your mind and remain focused on the task at hand. The theoretically minimalist graphic design is impressive and remains that way from the moment the game begins until it ends.

Much like Rez, Cosmophony uses a trance/techno soundtrack to near-perfection. The fast pace of the music gets your blood pumping and that makes the action both easier and harder depending on how you react to that. If panic is your natural reaction, then the experience will be harder. If it sucks you into things further, then you’ll find it much easier to get into the zone. Zapping enemies sounds satisfaying, and is accompanied by a rather violent rumble effect that makes the carnage seem that much more impactful. Cosmphony is a feast for both the eyes and ears. 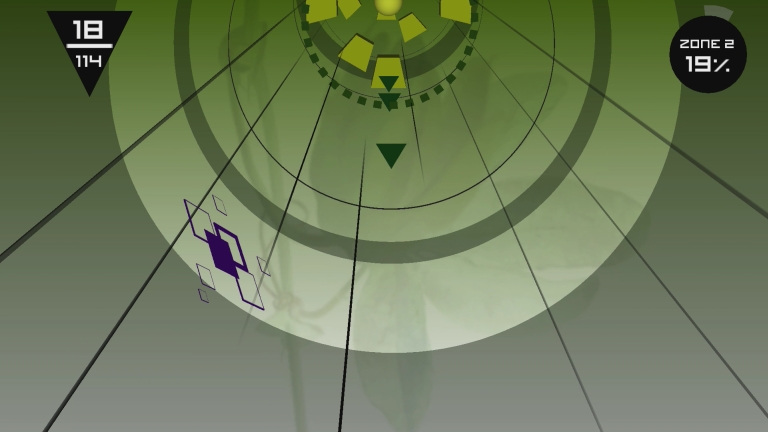 Cosmophony blends the runner and shooter genres together just about perfectly. When it comes to finding actual fault with the game, its small level count is the only issue. It’s one of those games that fits in with both bite-sized play sessions and can absorb you into longer ones. The addictive gameplay is smooth and you’ll never be able to blame a death on the controls. The intense graphics may cause a few deaths until you get used to them, however, but they serve as a reminder that you need to focus on the task at hand. If you love runners or Rez, give Cosmophony a shot.