Hitman Go from Square Enix Montreal reduces the Hitman series to its most essential elements. Anyone who knows the franchise recognizes that strategy is the driving force behind it, and the assassinations that follow are icing on the cake. Stylized like a board game, Hitman Go is all about planning. Characters are represented as pawns on the board that move according to simple rules, and you’ll have to think several moves ahead to outwit the game’s designers.

The game is turn-based, but still heavily focused on timing as any stealth title should be. You move Agent 47 about by sliding your finger from one point to another, and then the guards simultaneously take their moves depending on their type. Some will stare straight ahead waiting for 47 to walk in front of them, others will follow a path, and some will spin in place as each turn passes. New mechanics are introduced from level to level so don’t be surprised when you look up and find a new type of enemy. Figuring out which enemy will do what is easy since they all don different clothes and don’t change roles. Once you figure out the “rules” of the game traversing each level becomes a matter of figuring out enemy patterns and timing 47’s movements to match theirs. Extra goals in each level will bring completionists back for more. 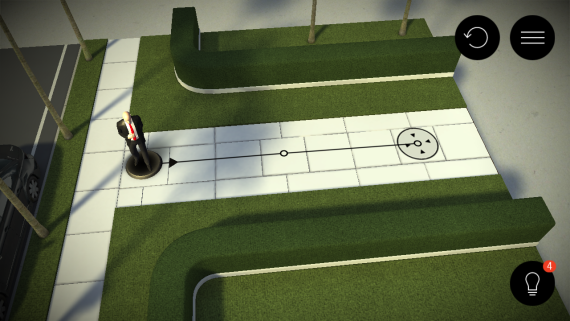 There are 91 diorama-like levels in the game, with some depicting events from previous Hitman titles like Blood Money and Silent Assassin. These are separated into themed packs that can be unlocked by earning insignias in levels or by paying $0.99 on the app store (you can purchase hint packs for $1.99, or pay $14.99 to have the whole game solved for you, which feels a little scummy). You automatically get one Hitman insignia for completing the level and the other two for completing side objectives (such as collecting a briefcase, winning in a set number of turns, or winning without killing anyone).

Fighting enemies feels very much like taking a piece in chess. If 47 moves into the same square as a guard their pawn will be knocked over and placed beside the board, while if a guard moves onto the same square as 47 after he takes his turn, you’ll have to restart the level. Later in the game you’ll find sniper rifles that allow you to take out enemies at specific spots. It’s important not to pick up a rifle until a guard is occupying the targeted area, lest you miss your shot and have to restart the level. 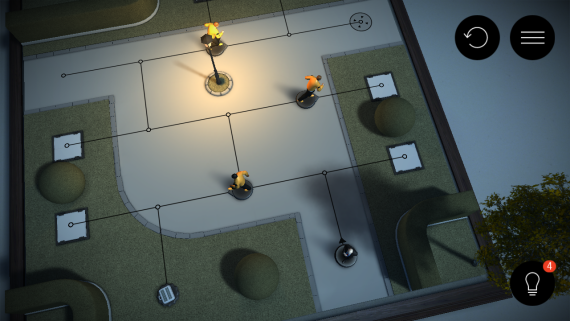 If you end up playing Hitman Go on your phone it will likely kill your battery. It’s surprisingly resource intensive for a seemingly simple game, and clearly optimized for tablets first. With the right hardware to run it Hitman Go is a sharply-executed puzzle game that brilliantly captures the magic of the Hitman franchise. Each level is a treat to look at and a devilish challenge to overcome, and there are plenty available, with more in development as we speak.

Hitman Go is available on iOS and Android for $4.99.