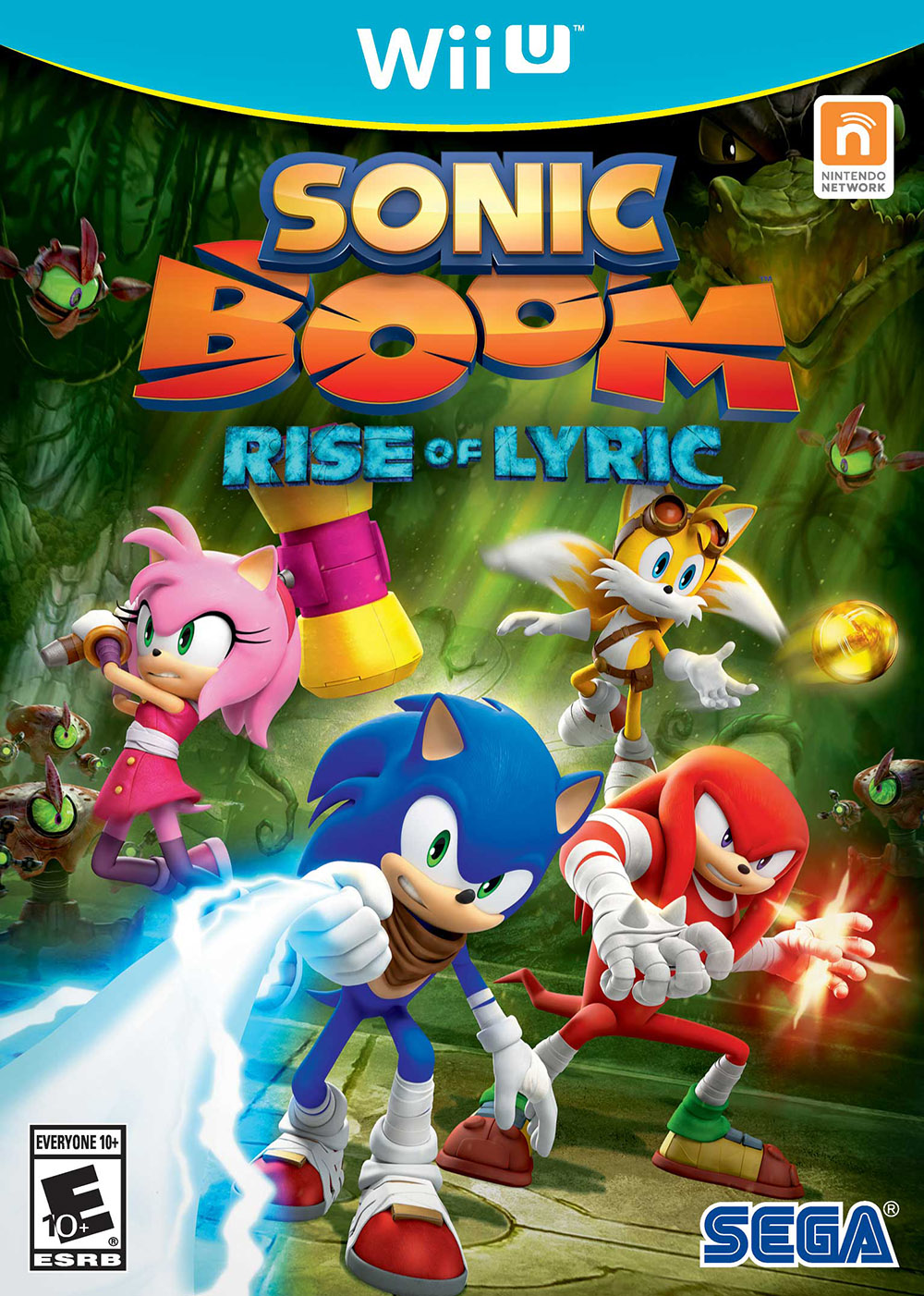 Developed by former members of Naughty Dog, the final of Sega’s Wii U exclusive Sonic titles marks the series’ biggest departure yet. With a new universe, new villains and even a new Sonic, Sonic Boom had the potential to break free of the issues that have held the series back since it moved to 3D. Sadly, it’s apparent the blue blur is still stuck running in place.

There’s a lot of lore to absorb in this new universe. Thousands of years ago an advanced race called The Ancients lived in harmony with technology and nature. One of them, Lyric, was forced to wear a mechanical suit to sustain his life, and so he became obsessed with destroying all organic life and replacing it with machines. When his brethren got wind of his coming betrayal, they trapped him in a stone statue. If video games have taught us anything, though, it’s that such measures are never permanent, and a millennium on Sonic and his friends inadvertently free Lyric while battling Dr. Eggman and Metal Sonic. Now they have to stop the ancient menace from gathering the magic crystals he needs to complete his plans, all while dealing with Eggman and his henchmen (henchbots?) along the way.

Compared to Sonic’s last outing, which had a tongue-in-cheek sense of humor, Rise of Lyric takes itself pretty seriously. Sega’s apparent confidence in the story is misplaced. Lyric, while interesting in design, is underutilized throughout the plot, tending to stay in the shadows rather than confront the heroes. Only Eggman puts any effort into thwarting them. There are a lot of side characters in the game, but nobody has any substance to their personality aside from Eggman and Sonic’s teammates. Even Shadow, in his brief cameo, does nothing other than serve as a boring boss fight.

Sonic and Co. have great chemistry, supporting each other and cracking wise in equal measure like you’d expect from the cast of a Saturday morning cartoon. Dr. Eggman is still as enjoyably goofy as ever, and his new look reminds me of the Red Baron. It’s a nice change of pace to see the portly egomaniac step down and let another villain take the spotlight, even if Lyric doesn’t do anything with it.

Sonic Boom‘s cartoony visuals get the job done, but they’ve got nothing on the eye candy of Lost World. The environments are a very typical mix of platforming stereotypes – you’ve got your volcanic world, your factory, your jungle, and your water world (not the fun kind with Kevin Costner, either). Beyond being bland, though, they feel lifeless and barren, especially the open world areas, which give you a paltry handful of characters to interact with. Cutscenes look a lot better, (Metal Sonic looks especially neat with all his shiny shaders) but the quality of the improved character models is a little inconsistent, especially Amy with her creepy dead-eyed stare.

In Sonic Boom‘s main stages you wander a partially-open landscape trying to get from point A to point B, solving puzzles and bashing enemies along the way. These stages get repetitive quickly. and the enemies are about as varied and inventive as the level themes – fire variant, ice variant, you know the drill. The puzzles all boil down to switching to a character with the unique skills to solve them, and serve more as character gates than actual challenges.

The rest of the game is set in an open hub world similar to Sonic Adventure. Between levels you can run around two huge islands, doing odd jobs for their inhabitants in order to earn Power Glyphs that augment your heroes’ abilities. Each character can equip one glyph, meaning you can have four enhancements active at one time. Because this is a children’s game made after Minecraft, you can also gather materials to upgrade parts of the world for townsfolk. Collecting these treasures requires careful observation and feels surprisingly rewarding.

Hidden around the world are chests containing scrap metal which can be used as currency to buy character upgrades like increased attack power and ring magnetism, as well as scattered crowns and shinies. Shinies, which are found by using the GamePad to follow footprints, are given to Sticks the badger (who was promoted as Sonic’s new ally but, like every other character, contributes nothing to the story) in exchange for crowns.

There are obvious differences between the four playable characters. Sonic is able to use his trademark homing attack and spin dash short distances. He can also go up blue ramps for puzzle segments. Tails can glide short distances and summon three robotic dogs to help in combat or with solving puzzles. Amy is the only character who can balance on pink beams, and can whirl around with her Piko Piko hammer to mow down swaths of enemies. Knuckles deals more damage than the rest of the characters, and is able to climb on special walls and ceilings. Unfortunately, all his steroid use cost him his gliding abilities. Oddly, each character moves at the same pace, so you won’t be able to move through levels any faster by switching to Sonic.

The game’s controls are serviceable if you don’t mind mashing your way through combat or waiting for a character to respond to your directional inputs. The dodge mechanic could add a bit of strategy to battle, but sadly it’s completely useless if your character is in the middle of one of their overlong attack animations. Platforming segments fare somewhat better, but oftentimes the fiddly jumping can lead to overshooting or undershooting ledges, especially when the game calls for precision. You need to maintain momentum to make some of the bigger jumps, and considering this all takes place on small platforms you’ll often find yourself falling short.

In Rise of Lyric there is next to no consequence for dying. Life is represented by rings just like in previous Sonic games, but running out in regular fights means you respawn literally right where you left off, with enemies retaining damage from before you bit the bullet. In Boss Fights death means restarting from a checkpoint, but when you’re used to the consequence-free system employed by the rest of the game it just feels tedious to run through the same sections over and over. Oddly enough this rule doesn’t apply to the last fight with Lyric, which means the game’s climax has absolutely zero tension. And you will reach that climax a little too quickly as the story is only six hours long, although completing and collecting everything will stretch it to twelve.

It’s admirable that Sonic Boom: Rise of Lyric tries so many new things, but every path it follows is a dead end. While the environments look decent and collectibles help give the short story some legs, the lack of difficulty, variation, and personality ruins any chance it had of making Sonic relevant again. Now that Sega has rushed through their exclusivity agreement with Nintendo they might have a bit more time to spend on making a worthwhile followup, but from the looks of things this spinoff has already been run into the ground.