Action is good. Downtime is boring, farming is boring and last hitting minions is infinitely less satisfying than turning an enemy player into a pile of barely-recognizable remains. This is the main philosophy behind KIXEYE’s TOME: Immortal Arena; a refreshing, intense but intuitive take on a genre known for being somewhat unforgiving to newcomers. We were lucky enough to meet up with Rade Stojsavljevic, General Manager at KIXEYE and Shawn Carnes, Creative Director on the project to talk about TOME‘s design philosophy and Steam release.

KIXEYE aims to provide a much faster-paced experience than other games in the genre while simultaneously reducing any extraneous mechanical skill that inflates the skill-floor in games like DotA 2 or League of Legends. TOME does away with last hitting to gain gold, as well as returning to base to heal or buy items. The former is solved by allowing gold generation to be granted to characters in proximity of minion deaths, the latter by having an always-accessible shop that air-drops gear in, and massive out of combat health regeneration granted after a few seconds of not taking damage. 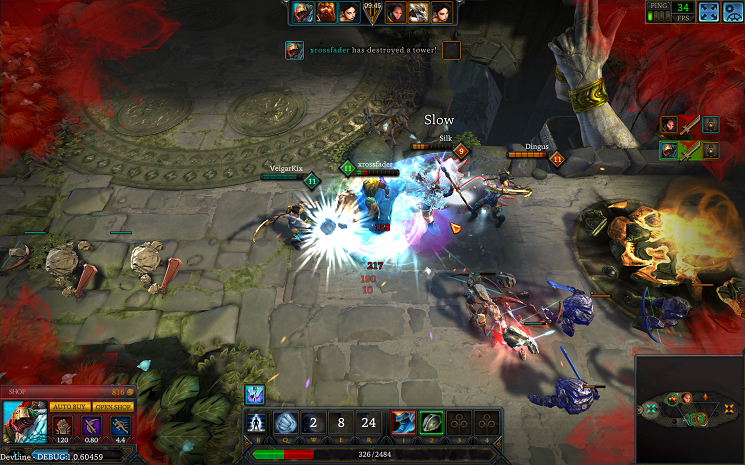 This method of trimming the fat in order to provide a better experience permeates the game. No resources are used to cast abilities; the only thing players have to manage is cooldown time. The in-game shop in its current state is relatively sparse, and stats are streamlined as well. There are three core attributes which the shop is sorted by: Attack Speed and Health, which are straightforward, and Might, which increases ability and attack damage. Movement Speed is also increased by the purchase of boot items. Each item in TOME has a beneficial ability that is either always active or activates when a particular condition is met. One set of boots — the ‘Trail Blazers’ — leaves a trail of fire behind you, while the Attack Speed item ‘Reflexive Grips’ allows you to attack twice with your basic attack every so often.

All this allows players to focus on the absolutely essential objectives in the game: pushing towers, securing team-empowering buffs, map awareness and, most importantly for the bloodthirsty, killing the ever-loving hell out of the opposing team. The game will ship with two maps, a 3v3 and 5v5 ‘Battle Arena’ upon which player characters — Guardians in this universe — will vie for ultimate victory.

The 3v3 Coliseum features two lanes and a middle platform for quick travel between sections (and is also home to Mortul, a fearsome neutral monster who, once killed, leaves his executioner’s team at a substantial advantage). The 5v5 map Sanctuary breaks typical MOBA conventions yet again by featuring two lanes and a significant jungle area between them. The jungle houses a number of little monsters and crystals which grant small buffs to whoever kills or collects them, as well as Lanterns that reveal if enemy Guardians are making a move to another lane (limited to a small area, of course). The Behemoth, a Raid Boss-like encounter, also calls this land his home and is a chaotic opponent that players should strive to take down together in order to secure victory. 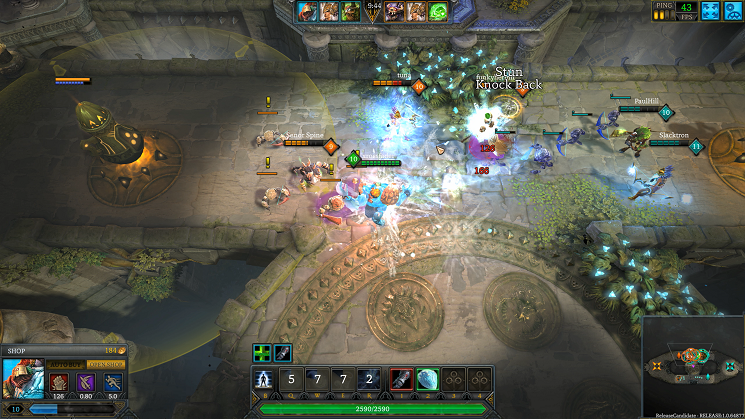 TOME: Immortal Arena will ship with 18 Guardians, running the gamut from crowd-control and support-heavy characters to frightening assassins who relish in bloodshed. Guardians hail from one of six Domains, each roughly representing an element (Creation and Death being the outliers among Fire, Water, Earth and Air) and fill one of four roles. Tacticians focus on impacting the fight in ways other than overt damage: Jeyde confuses enemies and manipulates fields of vision, while Auberon heals allies and restricts enemy movement and casting. Slayers tend to be high-damage characters suited for Guardian-on-Guardian combat like lightning archer Nyri or burst-damage ninja Jin. Pushers excel at dominating in lane and Tanks do exactly what you expect: soak up tons of punishment so Slayers and Pushers don’t have to.

The world of TOME is exceedingly lore-rich for those willing to put in the effort to read up. Once, a great Mediator bound the Gods of the six Domains together and kept their squabbles from destroying the world. They would settle arguments in his Battle Arenas and not allow them to spill over into the larger universe. Then, the six allied together and the Mediator abandoned his post, scattering the pages of the Tome of the Immortals which once bound them far and wide. Gods cannot directly control Guardians, and this is where players come in: as Harbingers, you control Guardians of specific Domains to carry the favor of particular Gods in the name of power and dominance.

Players are given a number of things to manage outside of the non-stop combat in-game as well. As you play a Guardian, you gain experience specific to him or her as well as to their respective God. Guardian experience unlocks Relics, which modify the way a specific ability works, adding beneficial effects or altering damage calculations in ways specific to that Guardian. Domain experience results in the acquisition of Blessings, which can be granted to any Guardian of any Domain and provide buffs that run the gamut from increased starting gold to additional attack damage or speed. Quests allow you to unlock Guardians initially, and then Devotion, the currency used to purchase additional Guardians. Premium, real-money currency ‘Platinum’ can be bought but only used for Guardian unlocks, skins and XP/Devotion/Favor boosts — the team is strictly against any kind of in-game power advantage as a result of in-game purchases. 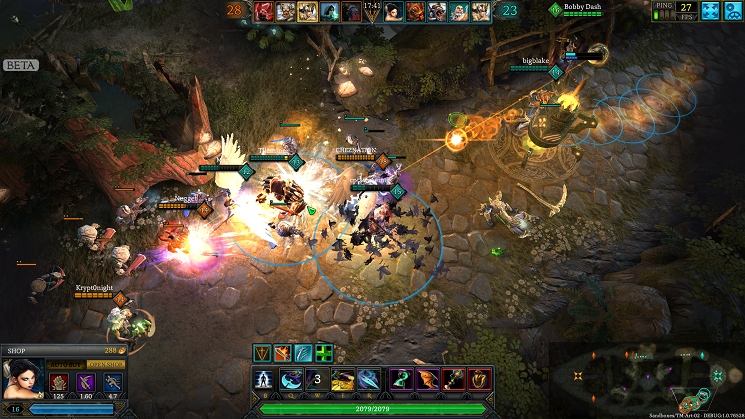 This all adds up to an approachable and incredibly enjoyable experience. Games run short — typically under 20 minutes in both the 3v3 and 5v5 modes — and pick up pace immediately, with minions spawning five seconds after the beginning of a game. This helps to curb the toxicity the genre is infamous for by both reducing the time between when a game is perceived to be lost and when it actually is, and by reducing opportunities for players to actually be toxic: you can’t stop to call your teammate a n00b if you’re constantly vying for a better position than your lane opponent. Matches are an absolute blast, and TOME has a bright future ahead of it: the team aims to add a chaotic 7v7 mode in the future as well as some super-secret features players will be extremely happy to come across.

The game releases at 10PST today on Steam, graduating from its browser origins, but players will be able to use their account from the browser version with all its goodies on the new platform. Absolutely give it a look if you’re in need of something intuitive and engaging with a high skill ceiling but easy to grasp basics.

We have a code for an exclusive Diesel Orlon skin, which turns the axe-wielding badass into a rainbow-pooping, unicorn-headed death dealer extraordinaire. For a chance at it, comment below with two of the Guardians you’re most excited to try out. A full list is available available at KIXEYE’s TOME portal here. Winner will be chosen at random, and duplicate entries will be discarded.