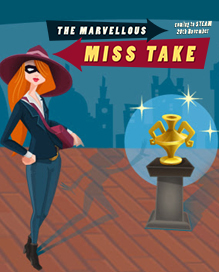 The Marvellous Miss Take feels like something it isn’t – namely a tablet game ported to PC. The entirely mouse-driven stealth game seems purpose-built for touch screens, but by all appearances it was always destined for Steam first. It would be interesting to talk to the game’s developers, Wonderstruck, to find out exactly what thought processes lead to its design. Unfortunately, that discussion would be more interesting than playing the game itself, which doesn’t exactly come across as the good kind of mobile port.

Sophia Take is a would-be heiress whose great aunt’s art collection is pilfered and sold off to private collectors around London. Unwilling to let her legacy go, Sophia embarks on a string of cat burglaries that will bring her up against the head of a shady security firm. Along the way she meets Henry, a crippled artist-turned-master-thief who strikes in the night, and Daisy, a sharp-witted pickpocket who’s light on her feet. Together the team vows to reclaim what Sophie lost. It’s a pretty standard setup for a heist story, and the game doesn’t really do much with it. The plot and characters are there as set-dressing, and what little dialogue is exchanged consists mostly of terse exposition and generic quips.

With that said, this game is clearly designed to feel “arcadey,” and it doesn’t need any more than that to work. Levels are small and designed to be completed quickly (another way this feels like a mobile game), with extra rewards for players who collect optional treasures and finish under a set par time. Once you complete a level as Sophia, you can return as the other characters and use their special abilities to complete extra objectives. Between levels you return to the Take family gallery, which serves as a hub. Sections of the gallery are gated off until you acquire a set number of each type of painting (each thief collects a different type when they complete a level). This level structure makes the game feel a bit like an early PS1 title.

The low-poly graphics also help to create that impression, although Miss Take smartly opts to build its own distinctive style rather than simply aping retro titles. The flat, colorful visuals are reminiscent of 50s modernist graphic art, and the blocky style works exceptionally well when painted onto simple character models. There are a few more recent graphical effects applied, such as a depth of field filter that gives the impression of a world in miniature, as well as accurate reflections in the tile and polished hardwood that Miss Take sneaks across. The overall effect is very appealing, and the game will look good on just about any graphics card. 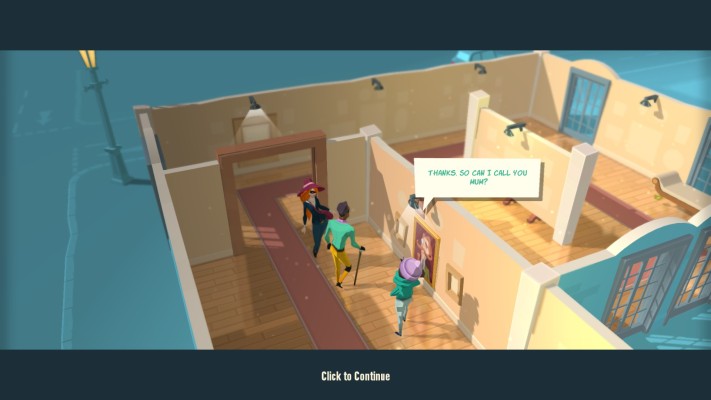 The stealth mechanics are as straightforward as they come. From a top-down perspective the player directs Sophia around the levels, stealing golden artwork while keeping cover between her and the prying eyes of guards. Each guard has a cone of vision that extends a good distance across the level, and when Sophia steps into it their suspicion will raise until either she goes around a corner or they become alerted and give chase. Sophia can lure guards by whistling, running, or darting across their vision, at which point they’ll walk over to investigate the disturbance. Additionally, Sophia has access to several gadgets, ranging from smoke bombs to teleporters, which allow her to slip around guards undetected.

Of course, what sets the game apart is its control scheme, but that’s also where it starts to come undone. You control Sophia by clicking where you want her to go. Clicking and holding on Sophia will cause her to whistle for attention, while clicking and holding anywhere else will cause her to sprint toward the mouse cursor. Right-clicking allows you to throw a gadget toward the cursor, which will ricochet off walls before activating. The actual inputs work fairly consistently, and tossing gadgets around feels good, but Sophia’s pathfinding isn’t the best, and it can often be a crapshoot which way she’ll go if you click a location on the other side of a wall or obstacle. Sometimes this leads her straight into the path of a guard. The game also has occasional trouble figuring out which side of smaller cover like pillars you want to be on, which can again lead to you being spotted. You can switch to WASD keyboard controls, but this feels overly stiff by comparison and removes the sole feature that that makes the game unique. 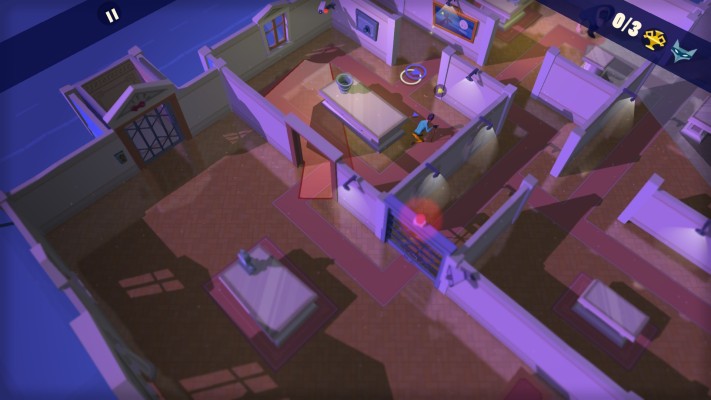 The other characters control the same way, but have quirks that make them feel distinctive. Once you complete a level with Sophia, you can go in with one of them for an extra challenge. Henry is crippled and thus cannot run, but as a tradeoff he has a unique noisemaking device that can be reused infinitely. He’ll refuse to leave the level until you pick the gadget back up, so you need to be careful where you throw it. He gets bonus points for slipping through a level unseen, which can be quite challenging given the aforementioned control issues. Daisy runs a little faster than Sophia, and is able to sneak right up behind guards in order to pick their pockets for keys. These keys open safes spread around the levels that must be plundered to complete each stage.

Instead of following set patrol patterns guards wander around levels randomly, which shifts emphasis away from the standard stealth dynamics of patient observation to a more immediate, reactive playstyle of distraction and evasion. While this lends itself better to the arcade-like game feel the developers were going for, hardcore stealth fans might be a little disappointed by the lack of more carefully-tuned challenges. Still, if you’re looking for more of a hybrid between puzzle and stealth games, Miss Take’s bite-sized challenges certainly fit the bill. 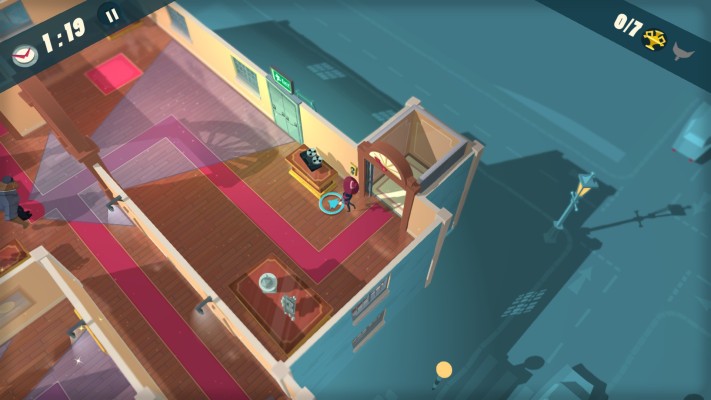 The Marvellous Miss Take has a good deal going for it – fast-paced stealth gameplay, eminently charming visuals and a fantastic pun for a title. There’s a decent variety to the level design and new game elements are introduced at a good clip to keep things fresh. Unfortunately, it’s hamstrung by its ambitious but flawed control scheme, and while it can provide a decent diversion, it won’t do much for hardcore stealth gamers.