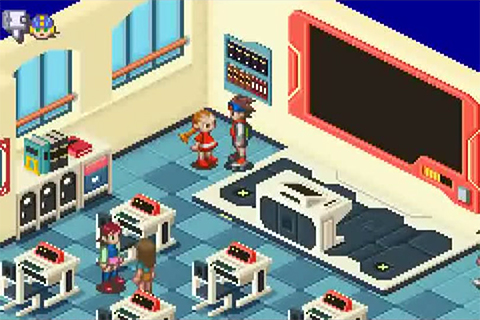 Mega Man has a bit of an odd history from the fifth console generation onward. The Mega Man X games suffered a slow but steady decline in sales and quality, and Mega Man Legends made it clear that Capcom had no idea how to translate the core elements of the franchise into 3D (though they accidentally made a pretty excellent adventure game in the attempt). In moving to the Game Boy Advance, the series had a chance to return to its 2D roots and restore the classic platforming gameplay that once defined it – so naturally Capcom decided to make a Pokemon knockoff first. The GBA would eventually see some stellar platformers in Mega Man & Bass and Mega Man Zero, but it was the bizarre RPG offshoot Mega Man Battle Network that led the charge.

Because some slightly worrying people are intensely concerned with the canon of a series about a little blue dude who shoots berserk handymen, Mega Man Battle Network takes place in an alternate universe where Doctor Light was Japanese and focused on developing software rather than hardware. The result of his research is the Net – an expanded internet that connects every 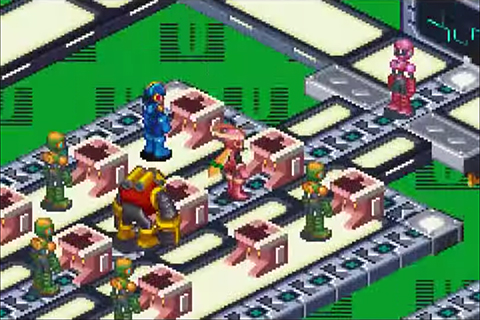 facet of human life – and with it, NetNavis – customizable AIs that explore the Net as a physical space on behalf of human users. Lan Hikari is one such user, and together with his NetNavi MegaMan.EXE (amazing they can contain an entire AI in a single executable) he takes it upon himself to save ACDC Town (yeah, that’s the real name) from a group of cybercriminals. These hackers pose a pretty grave threat given that their activities can play havoc with everything from ovens to power plants. It’s basically anime WATCH_DOGS, only with less moping.

As for how it plays, Battle Network is one of the more unique JRPGs on the market. Lan and MegaMan explore their respective worlds from an isometric perspective – the real world looks more or less normal, while the Net is comprised of floating walkways that appear to be made of computer components. Players will have to switch between the two worlds frequently in order to solve puzzles and open doors. The world-shifting mechanic makes for some interesting puzzle design, but it’s mostly set-dressing on standard RPG exploration. On the Net MegaMan is vulnerable to random attacks by computer viruses, which take the form of classic Mega Man enemies like Mettaurs. 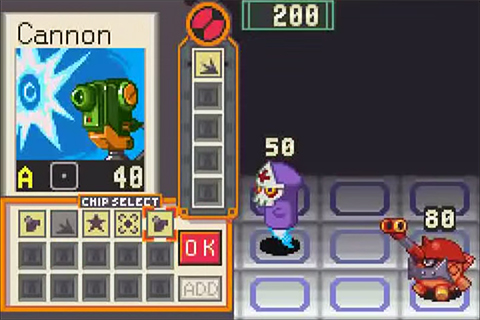 The battle system, which combines grid-based tactics, shooting, and CCG deckbuilding, is where things get a little crazy. MegaMan squares off against enemies in real time on a 6×3 square grid, firing off his trademark buster while moving back and forth to avoid their attacks. As in most Mega Man games, the blue bomber can steal the weapons of enemies and use them as his own, but here they take the form of reusable “battle chips” that allow him to fire off powerful single-shot attacks. 30 of these chips can be stored in a “folder” (essentially a deck) at once and in battle MegaMan has access to a random selection of 5 at a time. As battles go on a meter fills up at the top of the screen, and when it’s full the battle pauses and a new selection of chips becomes available. MegaMan can stack the chips from his “hand” in any order and fire them off one by one at the press of a button. When certain chips are stacked together in alphabetical order they can be combined into a “program advance” that allows MegaMan to devastate his foes, but using these consistently requires smart deckbuilding. 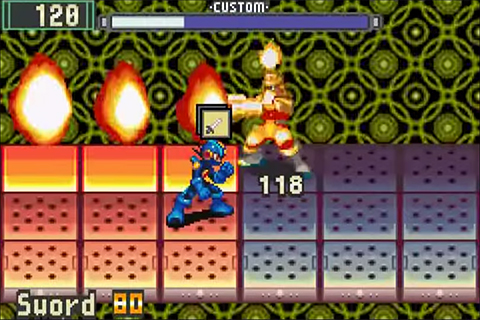 As should be expected from Capcom, who’ve proven themselves time and again to be masters of sprite art, Mega Man Battle Network looks pretty darn gorgeous. The character designs are colorful and varied, and every last character in the game, from key players to bit enemies, is exceptionally well-animated. On the other hand, the game’s music is largely forgettable, which is disappointing in a series known for its catchy chiptunes. The main theme is a bit of an earworm, but everything else fades from memory when the game is off.

Mega Man Battle Network is an immense departure from the standard series formula, but taken on its own it’s a great, unique game. You’ll never play anything else quite like it, except for the six sequels that Capcom put out in the years following its release… and the DS spinoff “Star Force” which uses the same basic gameplay formula… Capcom has a way of turning innovation into cliché overnight. With that said, Mega Man Battle Network is still a lot of fun, and if you’re left wanting more after the credits roll, there should be more than enough out there to satisfy you.