Civilization is a lovely thing.  No need to scrounge for ammo in preparation for the worst humanity has to offer while simultaneously worrying that the time would be better spent working on the food supplies, no fear that every encounter with the unknown will be your last encounter with anything ever, and of course no shambling undead hordes.  Proper civilization also includes pinball, and while The Pinball Arcade is a lovely thing it just can’t match the feel of an actual chunk of machinery geared around making a ball fall off the bottom of the playing field despite your best efforts.  The Walking Dead is Stern’s newest table, released in September and slowly filtering into what few places still stock pinball machines.  After getting several rounds of play on a brand-new machine today, I’m finally able to have a few things to say aside from “looks neat!”

The first thing that jumps out when setting up with The Walking Dead is its zombie theme, which jumps right out due to a large plastic toy in the middle of the playfield, plus zombie art on all details of the board and backglass.  While the machine is based on the tv show, the actors don’t show up anywhere on the playfield, although they do make an appearance on the side box art, but even that’s only Rick, Earl, Michonne and Glenn.  The small amount of voicework is clearly soundalikes, but the encounters on the field are at least recognizable as from the show.  The two big toys are the water-bloated well zombie and cell block C, but smaller touches like the crossbow arrows on the ramp lights and some familiar place names for the ramp shots help reinforce the theme as Walking Dead rather than Random Zombie Encounter.  It’s not the strongest integration of a license but it gets the job done.

The playfield itself is a lively place, although one big disclaimer gets in the way of The Walking Dead being a top-tier table.  When the ball gets moving one shot flows to another with a smooth grace, until it gets caught up in the bumper field.  The ramps are well-placed, the prison shot is trickier than it looks but making it a couple times opens the door to reveal a zombie-head target, and both flippers always seem to have a target to work towards.  It’s mostly a good design with little dead space, but the bumper field desperately needs a redesign. 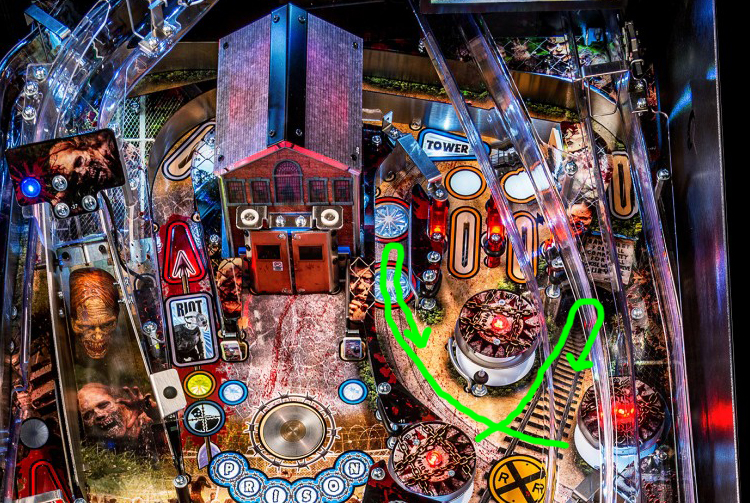 Ball bounces off the bumpers up the marked paths, thinks better of it, rolls back down. Usually a couple times per visit to this section, too.

The first shot of the game, as in most pinball, takes you to the bumpers for a bit of bouncy action, but The Walking Dead’s bumpers seem situated to kill momentum.  The ball gets shot up paths it doesn’t have the momentum to clear, and the single drain from the area dumps right into the center of the table.  It’s very easy to see the ball drop out at just the right speed to travel straight through the center of the flippers, and while there’s a generous free-ball timer that doesn’t do much good when the next shot has no choice but to drain out through the same troubled path.  It’s not certain doom by any stretch of the imagination, but the first unavoidable section of every ball shouldn’t have such a high-percentage chance of unavoidable failure.

Still, once out of that particular troubled section The Walking Dead regains its flow as you shoot the ball up ramps, into plastic zombie toys, and knock open the prison gates.  The promise of multiball dangled tantalizingly out of reach during my eight games ($5 spent, $2 gets 3 credits, matched once) so I can only assume it’s a good ride when it kicks in, especially seeing as when one ball gets stuck in Boring Bumper-Land that leaves a couple more to play with.  The Walking Dead is a hard pinball, with hungry sides and a center drain that’s easy to wander into, and it doesn’t give up its bonuses just because you dumped $1 into the coin slot.  There’s some good pinball to be had here, but at the $1 per play level rather than $8600 to own. 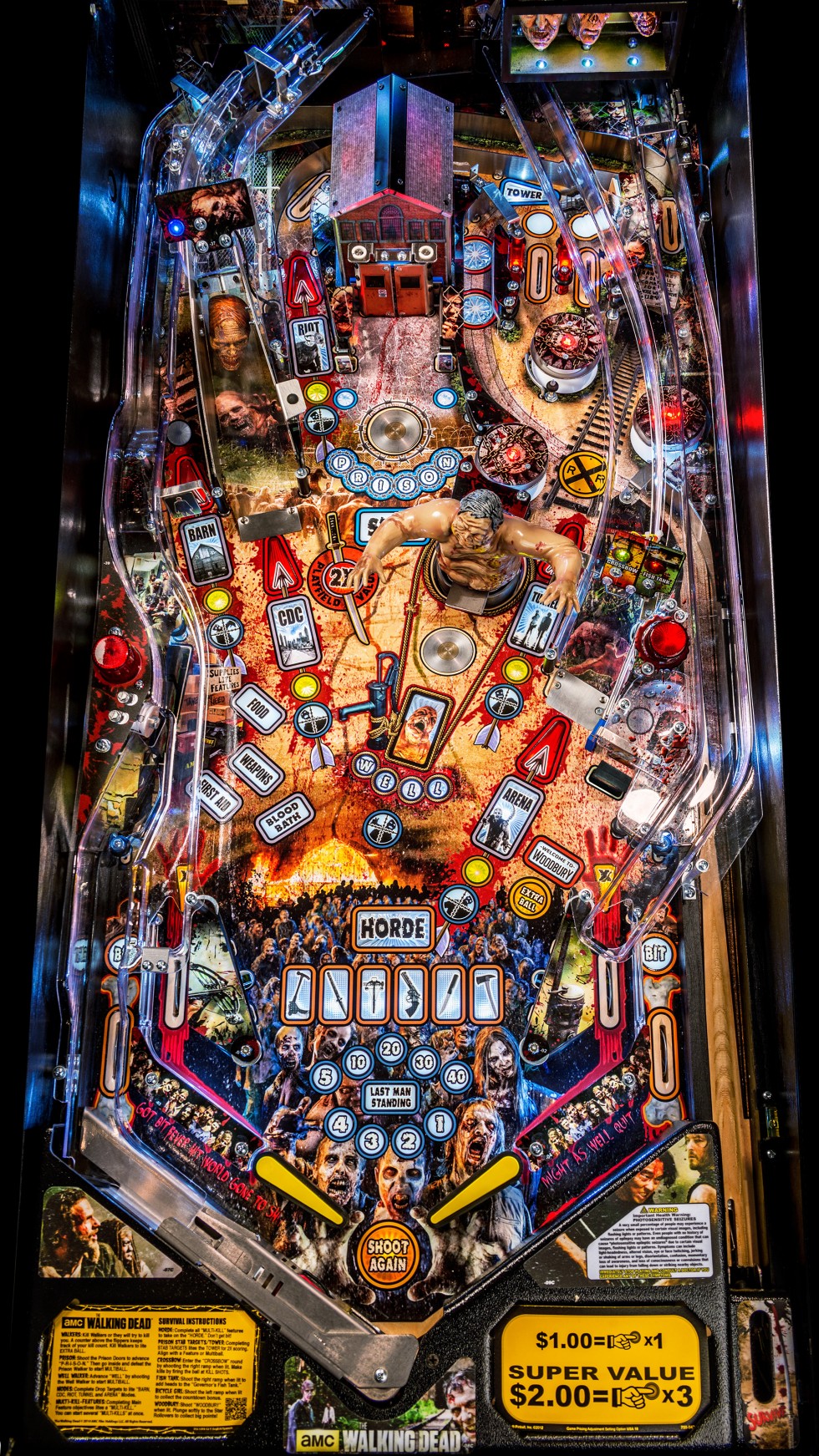