Stop me if you’ve heard this one. In the far future, a miraculous light-based device that’s supposed to bring mankind into a new golden age backfires, bringing a dark, corrupting evil to Earth. With most of the planet overrun by this encroaching evil, mankind begins using enhanced soldiers to fight back. You are one of these soldiers, and your actions will help to reshape humanity’s future in a massively multiplayer, globe-trotting shooter.

The headline sort of gives away that I’m talking about Firefall here, but that could just as easily be a synopsis of Destiny. I’ve played my share of both games, and while they have a lot in common, there’s a lot that differentiates them too. Destiny is more plot-driven, while Firefall strives to be an open-world, player-driven game in the vein of EVE Online. Both approaches have their pros and cons, but Firefall comes off looking surprisingly good when compared to Destiny: 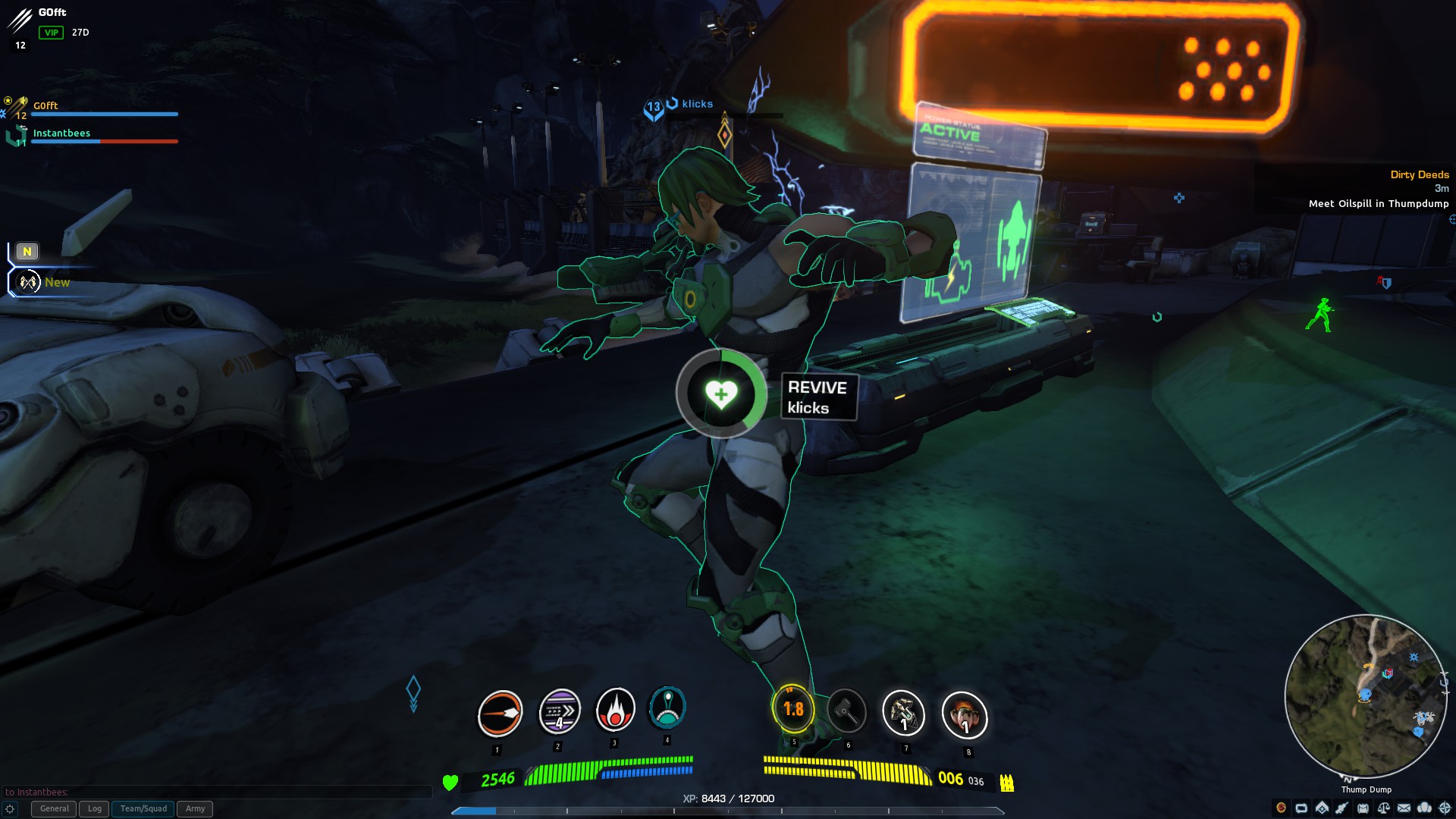 Firefall is free-to-play, which I know can be a huge turnoff for a lot of people who’d rather just buy a game and own it outright. For the most part I strongly prefer to own games myself, but the F2P model has its advantages, especially when it comes to open, dynamic games like Firefall. You’ll never find yourself at a loss for things to do in Firefall, though if you don’t shell out cash you will find yourself limited in terms of ways to do those things, and you’ll be walking to them an awful lot. The walking isn’t even a downside, necessarily, as the game’s immense continent can be quite a bit of fun to explore. As in the best free-to-play games, paying doesn’t necessarily make you more powerful, but it does let you access things more quickly. The PVP side of the game can still be a little bit unbalanced, but that comes down to an investment of time rather than money. In-game purchases give you side-grades rather than upgrades.

With Destiny, everything comes with a single 60 dollar price tag – at least, until the first piece of DLC hits. Whereas every update to Firefall will be free, you’ll pay a premium for every large expansion that Bungie puts out. Of course, that DLC will be optional, but only if you’re not concerned about staying competitive or continuing to play with your friends. For some reason, buying game content like this is more palatable to most gamers than paying microtransactions or subscription fees, but Destiny players will keep paying far more than the average Firefall player for a similar amount of content. Speaking of… 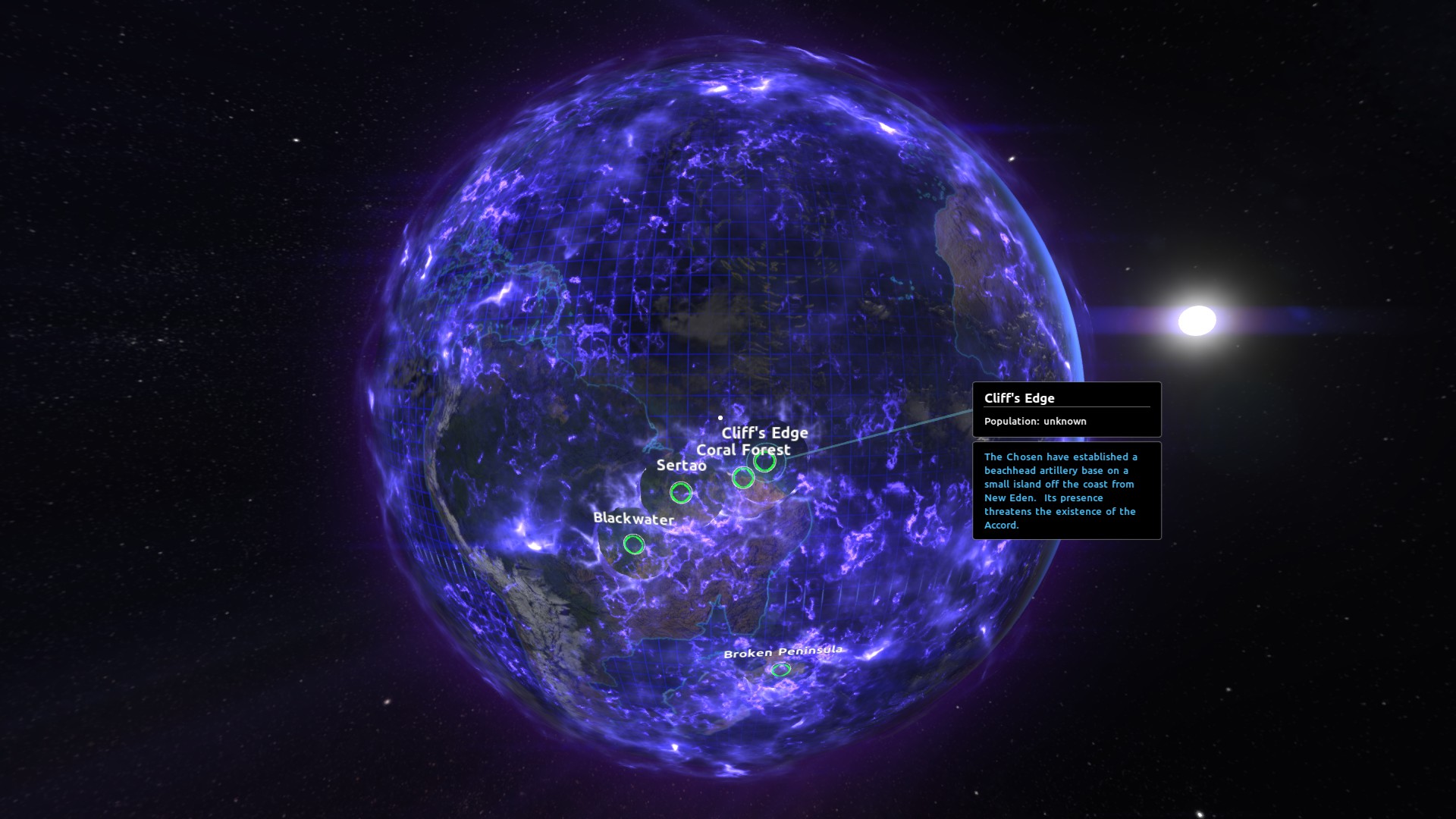 At launch, there were complaints about Destiny being too short – complaints that were quickly dismissed with claims that the campaign is “just the beginning.” The Vault of Glass raid shows that there is more content on the way, but right now it still feels a little light. Comparatively speaking, Firefall has a lot more going on right now. You can run around doing missions that involve infiltrating bases, defending civilians, and exterminating monsters, or you can take on the procedurally-generated events that constantly spawn throughout the world. You can lay down a thumper (a resource-gathering tool) just about anywhere and create an instant horde-defense scenario, or challenge anyone around you to an impromptu duel. Better still, you can do all of this with as many friends as you can gather together, or you can roll solo for an extra challenge.

Whereas Destiny has three classes (Hunter, Titan, and Warlock) with which to experiment and level up, Firefall has five (Assault, Recon, Engineer, Biotech, and Dreadnaught), and each one has two special premium variants available. Levelling every single “BattleFrame” will take a lot of playtime, and while that can get a little monotonous between special variants, the five base models feel very distinctive. The levelling experience with Recon (stealth sniper) feels nothing like Assault or Engineer. At this stage, though, none of them feel quite as refined as the classes in Destiny. 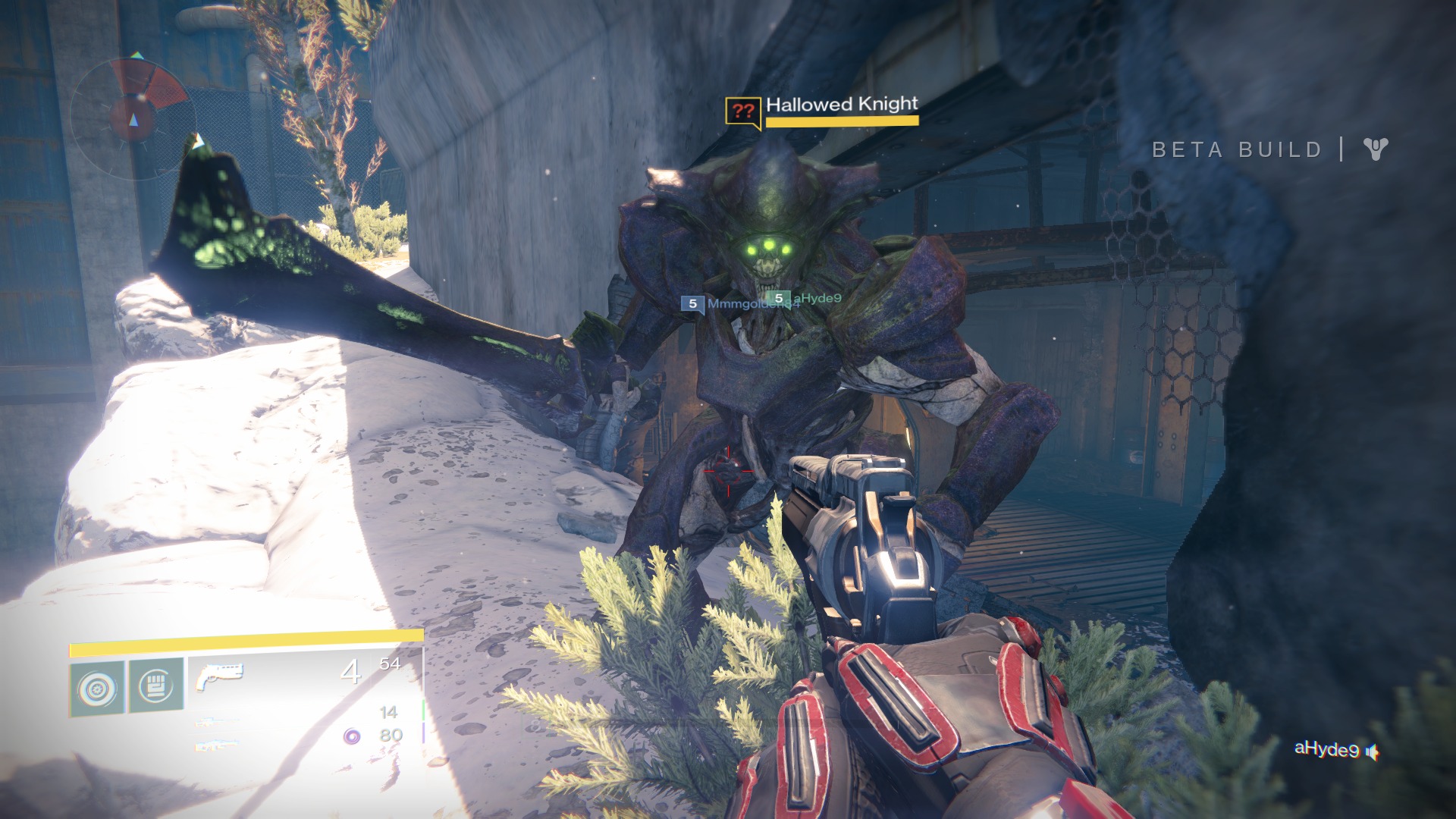 Destiny feels like Halo, which makes sense because it’s made by the same developers, and that’s kind of hard to beat in a straight-up firefight. Bungie has always excelled when it comes to shooting, and that prowess has made for some of the most widely-beloved multiplayer games of all time. By comparison, Firefall feels a lot looser, and many of its projectiles are on the slower side – somewhat like older shooters such as Unreal Tournament. Aiming feels less precise, even comparing a keyboard and mouse to a controller, and the AI in Firefall is a lot dumber, generally just swarming around you without much regard for avoiding your shots. Some of this comes down to technical limitations – more server-side calculations in a bigger open world mean that gameplay has to account for more lag – but Firefall could still be better-tuned. Playing against human opponents is more fun, but that has its own problems. 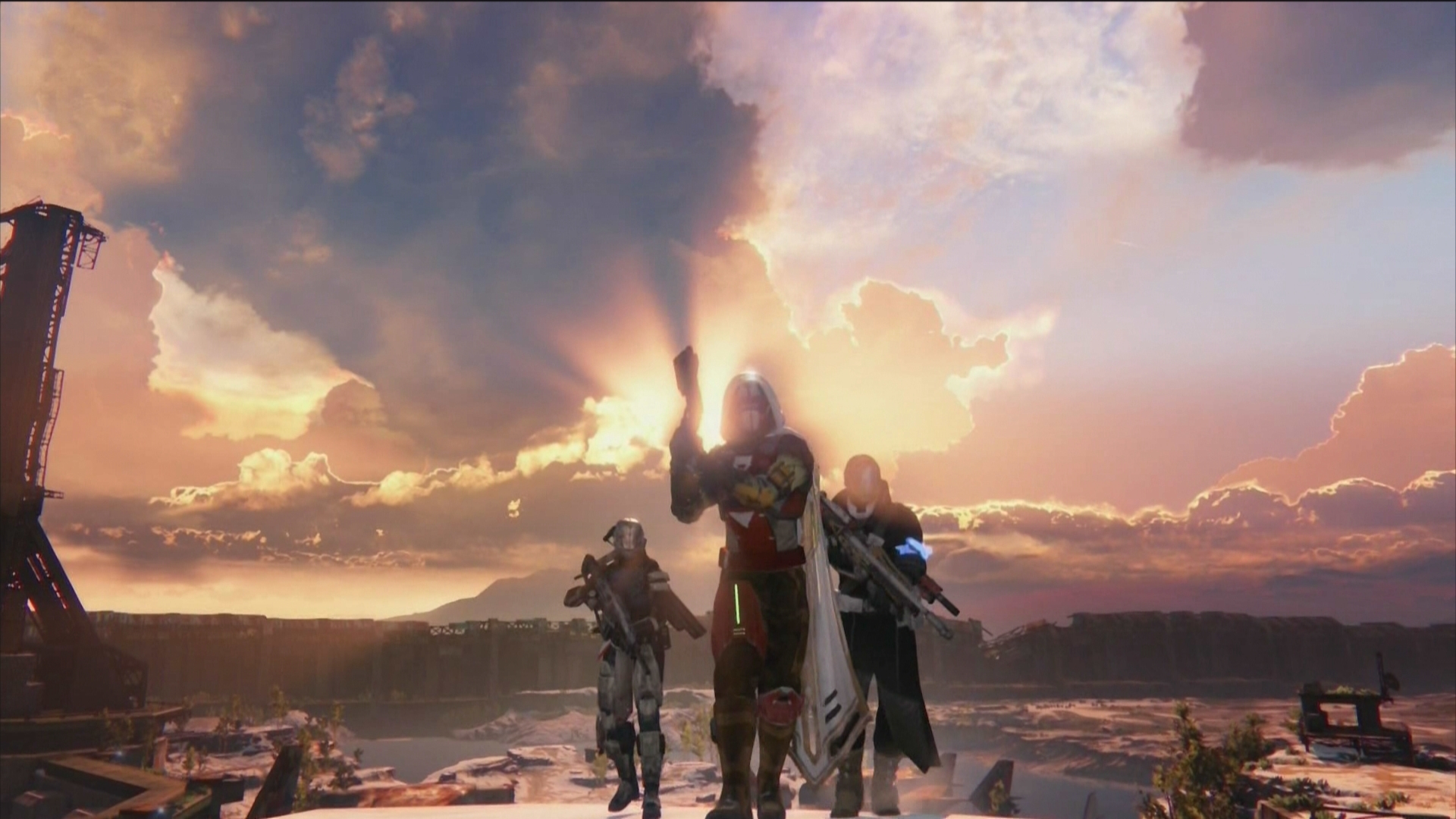 Firefall’s PVP is based on big ideas, and when I say big, I do mean big. An entire section of the game’s continent, Broken Peninsula, is dedicated to open-world PVP. Players can enlist under the banners of various corporations and fight it out for high-quality crafting resources, all while dealing with attacks from the “chosen” (enemies created by the “melding,” Firefall’s darkness-based evil force). It’s a cool idea, but it’s also a chaotic mess and, as you might expect, more than a little unbalanced. Just about anyone new to the Broken Peninsula will get stomped the second they set foot on it, and players who stick around long enough to get good will find themselves bored with doing all that stomping. The whole concept needs to be reworked if the OWPVP of Firefall ever hopes to match the insanity of EVE Online’s big, politically-motivated wars. More carefully-constructed gameplay could also provide an alternative for players seeking hardcore competition.

The Crucible is the heart of Destiny’s competitive multiplayer scene, and again it feels a lot like Halo, though with a few key discrepancies. Bungie needs to rework their balance philosophy to account for custom player loadouts as opposed to weapons spawning in-map, but their Arena-based PVP is considerably better-balanced than what Firefall offers. Weapon parity means that there isn’t an immense power gap between vets and newbies, and closed arenas are much easier to design for competitive play compared to big, open areas. Red 5 has stated that they plan to bring instanced arenas back to Firefall (they were present in the Beta), which should make for tighter firefights and give players an avenue to improve outside the chaos of Broken Peninsula. If the peninsula can be refined, though, it will offer a truly unique multiplayer experience that sets Firefall apart from its contemporaries. 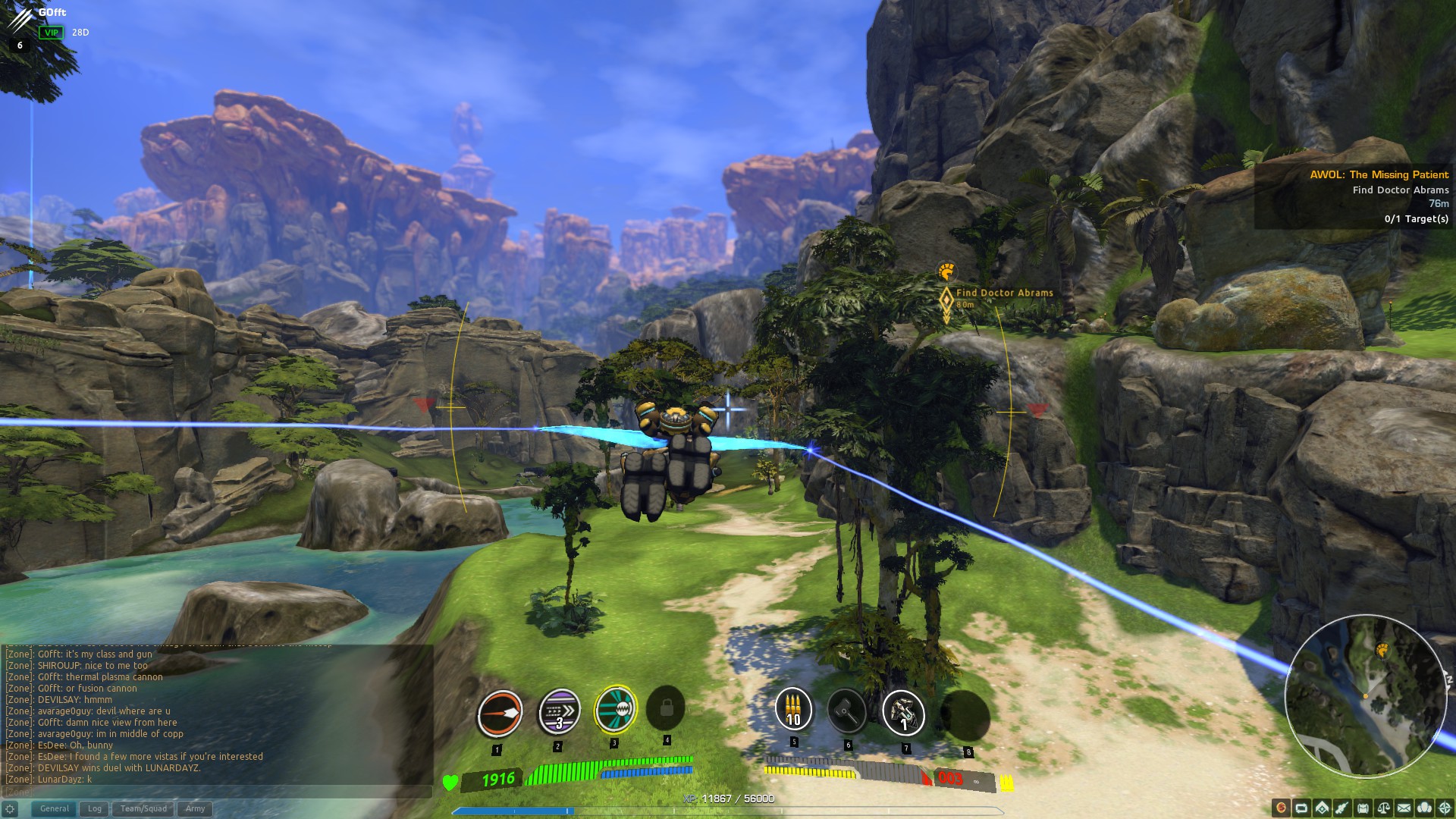 Destiny is a very tightly-designed game, but none of its maps are much bigger than what you’d see in the most open parts of Halo. Jumping from Russia to Mars to the Moon is enjoyable, and each location offers distinct challenges, but it all feels more or less like series of levels in any other shooter. This instanced “shared world” design philosophy is what allows Destiny’s core gameplay to feel so tight, but the tradeoff is that it also feels small. Firefall isn’t all that much larger than Destiny in terms of real-estate, but its interconnected world presents a more impressive sense of scale. You can fast-travel between zones if you want to get around quickly (though doing so from outside a mission hub will cost you in-game money), but travelling between destinations is a lot of fun in itself.

The first thing you’ll notice when you play Firefall is that your BattleFrame comes equipped with a powerful jetpack. Climbing cliff faces and buildings with the pack is about as much fun as you’d expect (which is to say extremely), and it also gives combat a more vertical element than you see in most shooters, though admittedly the AI doesn’t really take advantage of that. Both Firefall and Destiny give you vehicles to ride around on, but zipping between objectives on your hoverbike in the space of 30 seconds and taking a five-minute road trip with your buddies from Copa Cabana to Thump Dump are very different experiences. Vehicle handling is also one of the few areas where Firefall feels better than Destiny, though that shouldn’t come as much of a surprise to anyone who’s tried to steer a Warthog before. Far and away the most engaging way to get around Firefall’s vision of future Earth is with glider pads, which send you rocketing up into the air with badass laser wings to help you fall with style back down. Banking around with the mouse and keyboard is a lot of fun, and you can even shoot enemies from the glider, though it’s a little too twitchy to make for a reliable combat strategy. 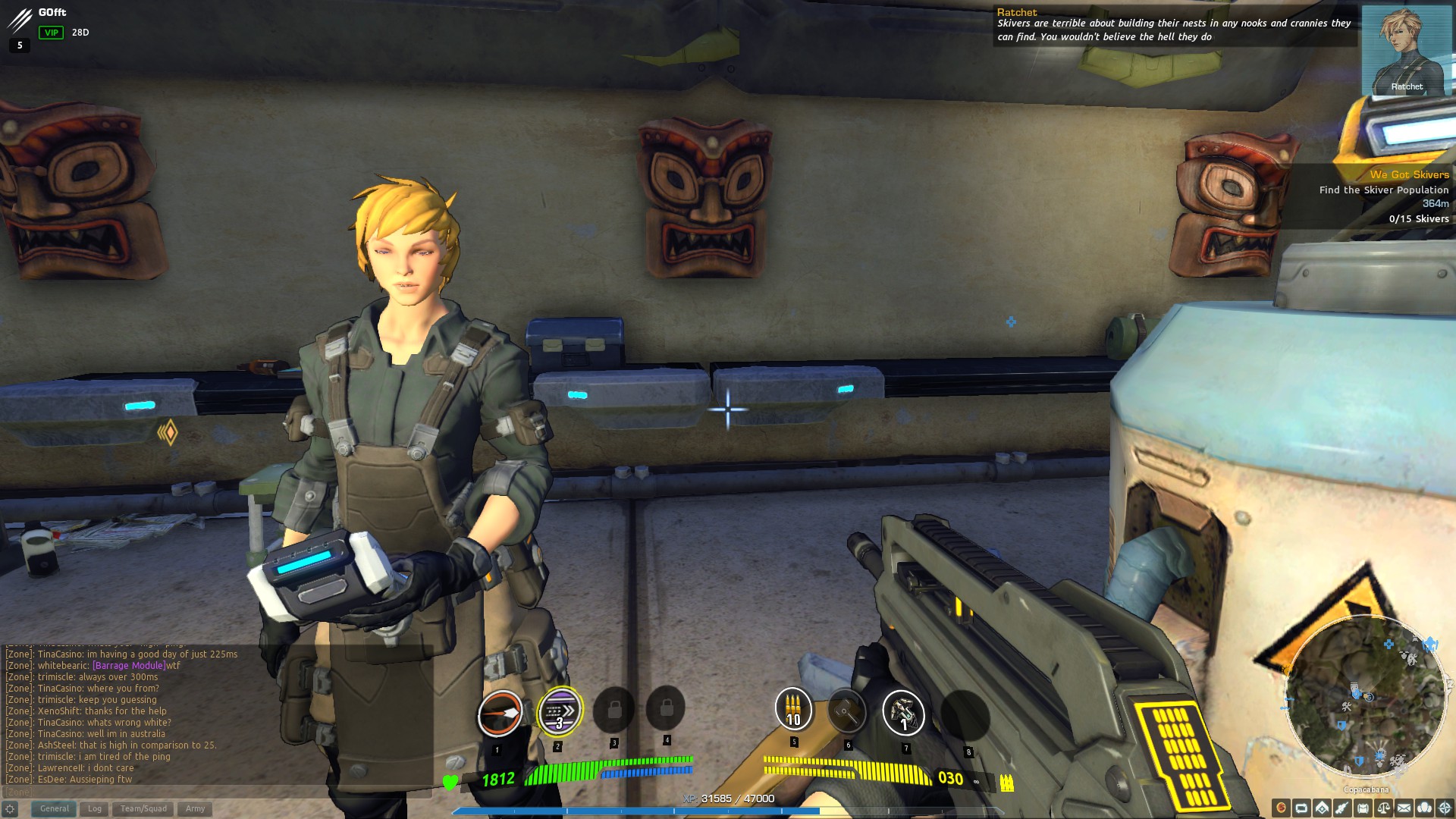 It doesn’t take much for a game to outstrip Destiny in the narrative department, and story isn’t really all that important in a shooter to begin with, but nonetheless there’s a lot more going on with Firefall’s backstory than with Destiny’s. The Traveller is a godlike figure that just shows up on Mars, and the Darkness is some ancient, mystical evil that opposes it. Firefall’s Arclight, meanwhile, is a marvel of human engineering made possible by the greatest disaster in Earth’s history, and The Melding is a seemingly extradimensional force that breaks through to Earth when the Arclight tries to make an FTL jump. Firefall’s setting feels like a result of natural cause and effect, whereas Destiny’s seems more like the outcome of divine intervention – perhaps appropriate given the game’s title, but not all that interesting. 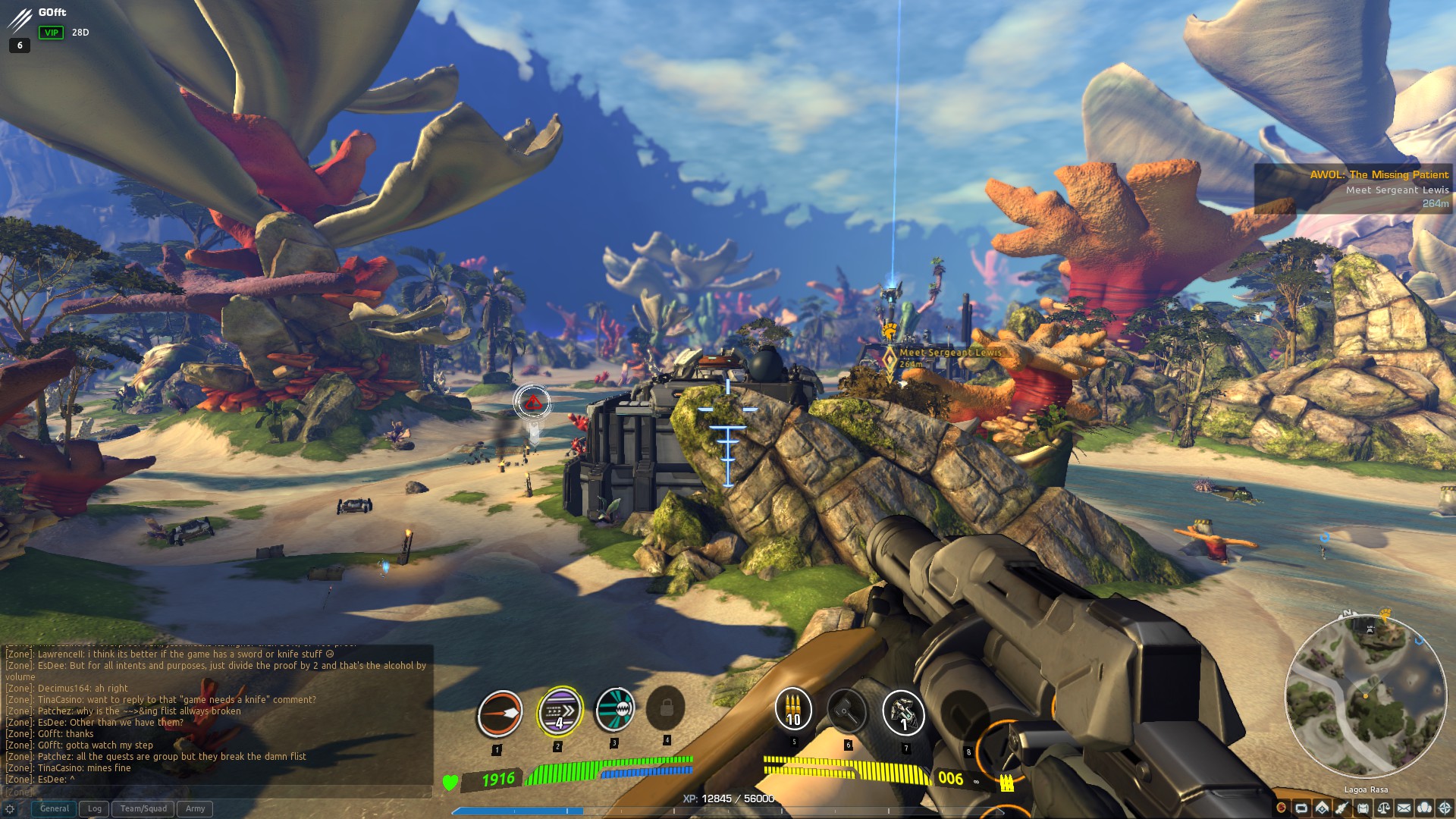 Destiny has a lot going for it, and that’s been reflected in its sales, but if you’re interested in picking it up – or if you’ve played it and found the experience to be lacking – then I’d recommend giving Firefall a try. The shooting is a little clunkier (and feels a bit more like Unreal Tournament than Halo), but the world is far more open, and Firefall invites you to make your own fun in ways that few other MMOs or shooters can match. It’s not for everyone, but its connected world and more dynamic mission progression makes it feel very lively, and as a free game that doesn’t capitalize on addictive tendencies, there’s no harm in giving it a try.