Over the weekend, a lucky soul managed to make $2500 on eBay by selling a heinously deformed Samus Amiibo for a staggering $2488 profit. This figure, of course, assumes that the seller didn’t get conned into taking on the shipping costs (seriously, if you can afford to buy a messed up figurine for $2500, you can throw a few bucks down for shipping). Rather than having a single arm-cannon, this incredible statuette has two, thus giving her the ability to fire multiple energy beams at once. Goku, eat your heart out.

Let’s, for a second, imagine that the star of the Metroid universe actually had arms made out of energy cannons. Though this would be nothing short of epic (let’s face it, the only thing that could beat two arm-cannons would be two actual cannons), this hypothetical combat enhancement would create some intense real-life difficulties. In the most tragic creation situation since Mega Slowbro’s entire body became a toilet, Dual-Cannon Samus Aran literally wouldn’t have hands, thus making it impossible for her to hold a fork, spoon, or chopsticks. This would ensue in a horrifying tale of starvation, as every attempt at eating would result in one or more arm-cannons filled with food products and/or utensils. 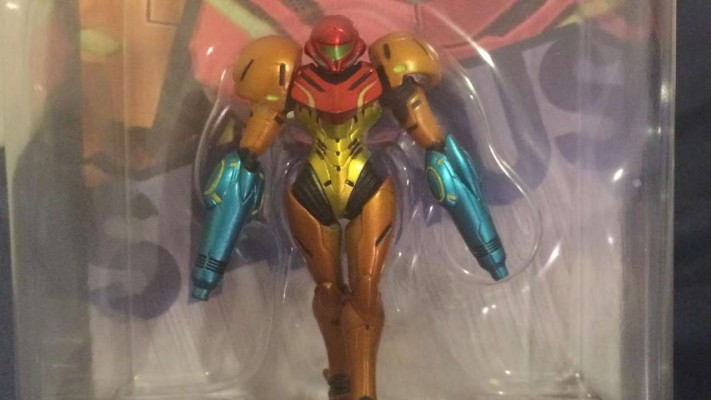 In theory, the original Samus would never truly able to cut her own food, instead requiring an adult to cut her steak into small pieces like some sort of robotic child. After all, you need two hands to hold a fork and a knife, and an arm-cannon most certainly is not a hand. In all likelihood, Samus’ diet would revolve around apples and soup, two of the most popular one-handed foods in the universe. For a special treat, Samus might find herself nibbling on Baby Ruth bars, the most one-handed candy-bar known to man. It’s would be a simple, yet majestic life, and while prime-cut pork chops and ribs would most certainly be a struggle, she clearly is able to thrive without some of these two-handed novelties.

Of course, this is all predicated on Samus Aran consuming food, rather than just eating numbers or whatever people consume in the future. Dual-Cannon Samus’ attempt at food intake would clearly be a disaster. From clogging both of her arm-cannons with garlic mashed potatoes and steamed broccoli, to repeatedly finding herself face first in a bowl of Quaker Oats Banana Bread oatmeal, food would not be kind to her if she had zero hands. It should be noted that in this hypothetical scenario, Samus’ peers would give this nauseating breakfast food to their two-cannoned adversary because of the universally-accepted belief that banana oatmeal is the foulest addition to the Quaker Oats variety pack. Rather than leaving these bags of garbage in the back of their space pantries to rot like every other sane person, they would trick their deformed peer into eating this disgusting heap of banana slop, because let’s face it, Dual-Cannoned Samus wouldn’t be able to cook her own food. You know…because she wouldn’t have hands because of the whole two cannon thing. In this alternate timeline, her helmet would probably be covered in crusty food particles and scratches due to the arduous process of slamming her face repeatedly into a bowl to consume life-fuel.

Taking all this into account, a Samus with two arm-cannons would be horrific for Metroid. The entire series would end after a single game, due to Ms. Aran’s untimely death. So enjoy your new Amiibo, random Internet buyer of defective nonsense. You can sleep soundly knowing that, if this deformed character was actually real, she’d live a horribly hungry and frustrating life until ultimately dying from starvation. Suddenly this plastic hunk of junk doesn’t look too amazing on your mantle, does it?