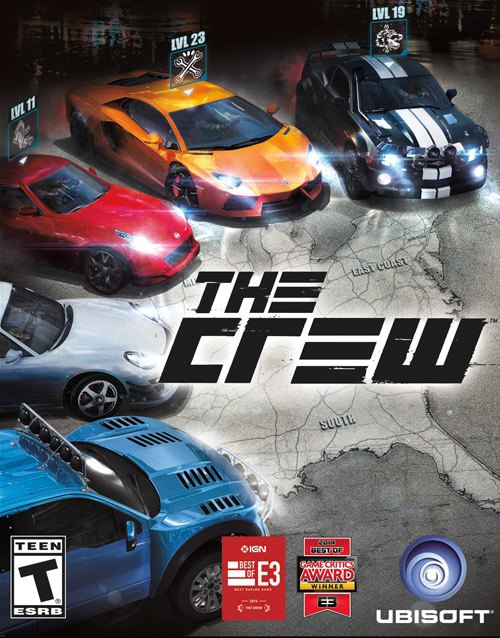 Ubisoft is a company with a strong track record and such a hefty fan base that they have the resources to do virtually anything with their games. While the last year hasn’t treated them as well it could have critically, they still have some of the most commercially successful franchises under their belt. With the newly formed Ivory Tower, Ubisoft has helped create yet another overly ambitious product of immense size. Mapping out The United States of America, players across the world can now join together to drive from the beautiful vistas of Miami to the sand stricken deserts of Nevada. While this doesn’t include city across the way, it’s the scenery and social aspects that should have players coming back for more.

Story has never been racing game’s strong suit and The Crew is no different. Unfortunately, what has been attempted here is atrocious and can get in the way of the entertaining values it has to offer. You play as the Troy Baker voiced protagonist Alex as he’s framed for his brother’s murder. In order to get his revenge, he must climb the ranks of the 5-10 gang with the FBI at his back. To do this, he will have to travel across The United States, starting off with Detroit, and do jobs for rather shady individuals. There’s nothing memorable or enjoyable about how the plot is structured, most especially considering during each race, the one who assigned the mission will constantly bark over the radio. This can be some of the most aggravatingly annoying mid-mission chatter to ever grace a video game as they’ll constantly mock you if you’re overtaken and compliment you when you’re in first. Even in-between missions, Zoe, the FBI handle, will frequently give vocal reminders that there’s missions to do or people around to join with no way to turn it off. It becomes a frustrating aspect when you should be focusing on driving.

If all you want to do is drive across The United States with friends, then you’ll have to at least get through five hours of the campaign before things open up. Even then, progression is as such that you won’t be able to unlock a lot of the challenges and earn enough cash to purchase new and better vehicles until much later on. Joining a faction will help speed up the progress a bit as they reward players with a shocking amount of Crew Credits to buy new cars, but get cozy with the starter vehicle as it’ll be used for the first couple of cities. That’s not to say progression tries to limit itself, especially considering how forward Ubisoft is with the microtransactions set in place. There are some incredibly overpriced items at car tuners, but they’re mainly aesthetics, with upgrades to vehicles being won from missions and side activities. 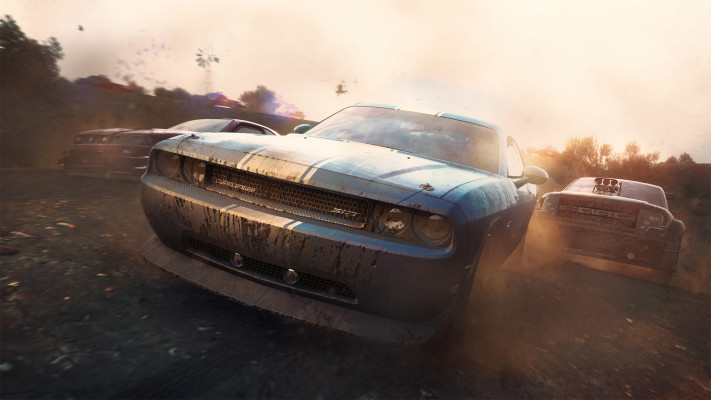 Speaking of mission structure, The Crew offers pretty much what is to be expected from modern arcade racers, just with an emphasis on an always connected online world. There are checkpoint runs, getaways, takedowns, collection tasks, time sensitive races and trail missions. For a game with sixty-five main missions, it does drag a bit as the same tasks will be repeated over and over again. With that said, even though there’s some repetition, there are a couple of standout scenarios, such as traveling to Las Vegas to race in a cavernous terrain. Escaping from the police, on the other hand, whether in getaway missions or accidentally alerting them, can be an unfortunate chore as they are overly aggressive and always seem to catch up, even at top speeds. Playing the main missions solo is also greatly unadvised. This was built for three others to play with, and if players decide to ignore that, they’ll have a far less stellar time. When teaming up with a crew of four, though, it can be an entertaining short couple of minutes, whether cooperating or competing against one another.

Outside of the main campaign, there are also challenges scattered across the map. These are put on the road to accomplish different tasks, such as precisely hitting targets, maintaining high speeds, jumping a ramp and a couple more. These will quickly distract you from where you’re going and do help unlock car-specific parts, but they quickly become tiresome. There isn’t enough variety here to keep things interesting, and with the entire United States bathed in them, they eventually become just an endless slew of blips on a map. There are also faction missions, and these require a staggering amount of time and patience to complete. While most of the main missions take a minute to five minutes to complete, Faction quests are online-centric objectives require anywhere between ten minutes and two and a half hours. That’s right, there are races that will take the length of a Peter Jackson film. While this sounds great, the problem is that these are just simple checkpoint races, and considering how easy it is to crash or spin out of control, sitting in last place for an hour or two is not a good way to spend an evening.

It doesn’t help that The Crew requires an always online connection, and currently, there are some issues. On multiple occasions was I met with an infinite load time, kicking me back to the main menu, and just removing me from the crew midrace. There’s nothing like finishing an hour long mission only to get kicked out of the game before any of the progress saves. This is a game that borders on an MMO structure while not completely breaking into the territory, and it’s just ripe with connection issues that will infuriate those who encounter them. The social aspects are definitely an important part of the experience, but there should be no reason why it needs it to be fully connected when playing solo, especially when it gets in the way of progression. 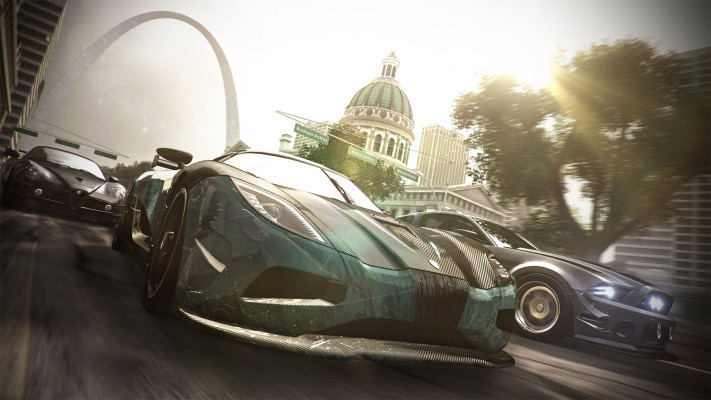 True to their word, Ivory Tower has crafted a version of The United States to travel across, with some caveats. As this is a video game, the country isn’t depicted 1:1 with reality. So that means there are only six significant cities, each one compressed in size, and a handful of smaller ones that populate the map. There are some questionable exclusions, such as Boston and Phoenix, but it may be a bit much to ask for every major city to be included. The rest of USA is open land to drive across, whether it’s the Bonneville Salt Flats or the snowy hills in the north. The recreation of The United States is the most ambitious portion of The Crew, and it succeeds in delivering a vast and stunning country to see. From Niagara Falls to Los Angeles, there’s roughly 80 miles of road to trek across, taking roughly 40-45 minutes, and that’s just in one direction. It certainly helps that there’s a strong variety of environments to see, never allowing the player to get bored at what’s around them. Unfortunately, starting off in Detriot is to The Crew’s detriment as it will take a while before the scenery turns delightful – unless of course you go wandering on your own. It also doesn’t help that traffic AI can be insufferable at times. While it may be normal for traffic to react differently based on what is going on around them, namely having someone speeding right at them, but it feels like they have been put in to purposely obstruct races. On numerous occasions, they’d veer into my lane for no apparent reason, or even if they have a green light, stop right in the middle of the road for you to slam into them.

Besides the monumental focus on a consistent online world, The Crew doesn’t differentiate itself enough and actually feels far less impressive mechanically, lacking much of a characteristic trait. There are traction-specific sections of the world, so if you don’t have a dirt-specific vehicle, the wheels won’t catch off-road and will go much slower. The emphasis on drifting around corners and the simplification of gear parts gives off a distinct arcade racing feel, but the handling can be a bit clunky, especially in the earlier parts of the campaign. That’s not to say it’s poorly done as this is probably the best racing game Ubisoft has published from a fundamental standpoint, but it doesn’t hold a candle in the exhausting catalog of racers. This somewhat ties into the RPG elements as it will take hours before a vehicle is leveled up enough to handle to your satisfaction, especially if you choose to drive in the third person perspective. It’s also something to point out that there are under forty cars to obtain, a shockingly low number for a racing title. Granted, most of these vehicles can be suited with different stocks, whether dirt, street, performance and more, but for a game that tries to sell individuality within a large interconnected world, there’s far too slim of a selection. 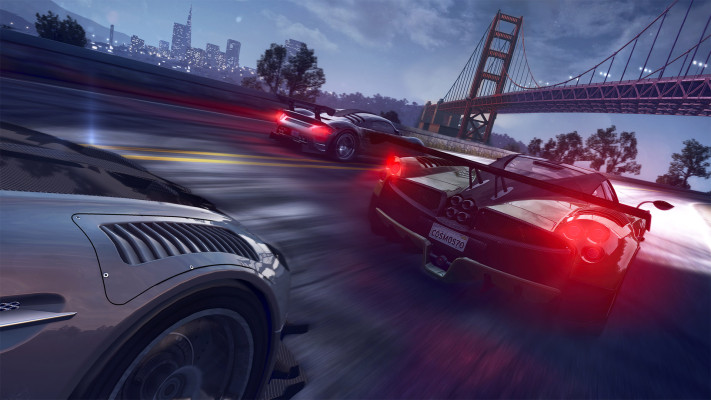 The Crew can be fun under the right circumstances, but unfortunately those are too far and few between. It’s not a bad game, as there’s a lot to like in this package, but there’s also a fair amount holding it back. Ivory Tower’s United States can be downright beautiful with a lot of open road to cover, but the lack of variety in the mission structure causes concern. It doesn’t help that the online connectivity is also put into question as the number of times we were kicked to the main menu at the end of a race is staggering. Taking road trips across the country is one of the only redeeming qualities, but only when you have a group of friends to do so. It’s 100% reliant on playing with at least one other, otherwise the experience is purely tedious. The driving, while enjoyable, requires grinding through repetitive side missions before handling feels right, and the selection of cars is lacking. The Crew is an overly ambitious project that just doesn’t go the full mile.