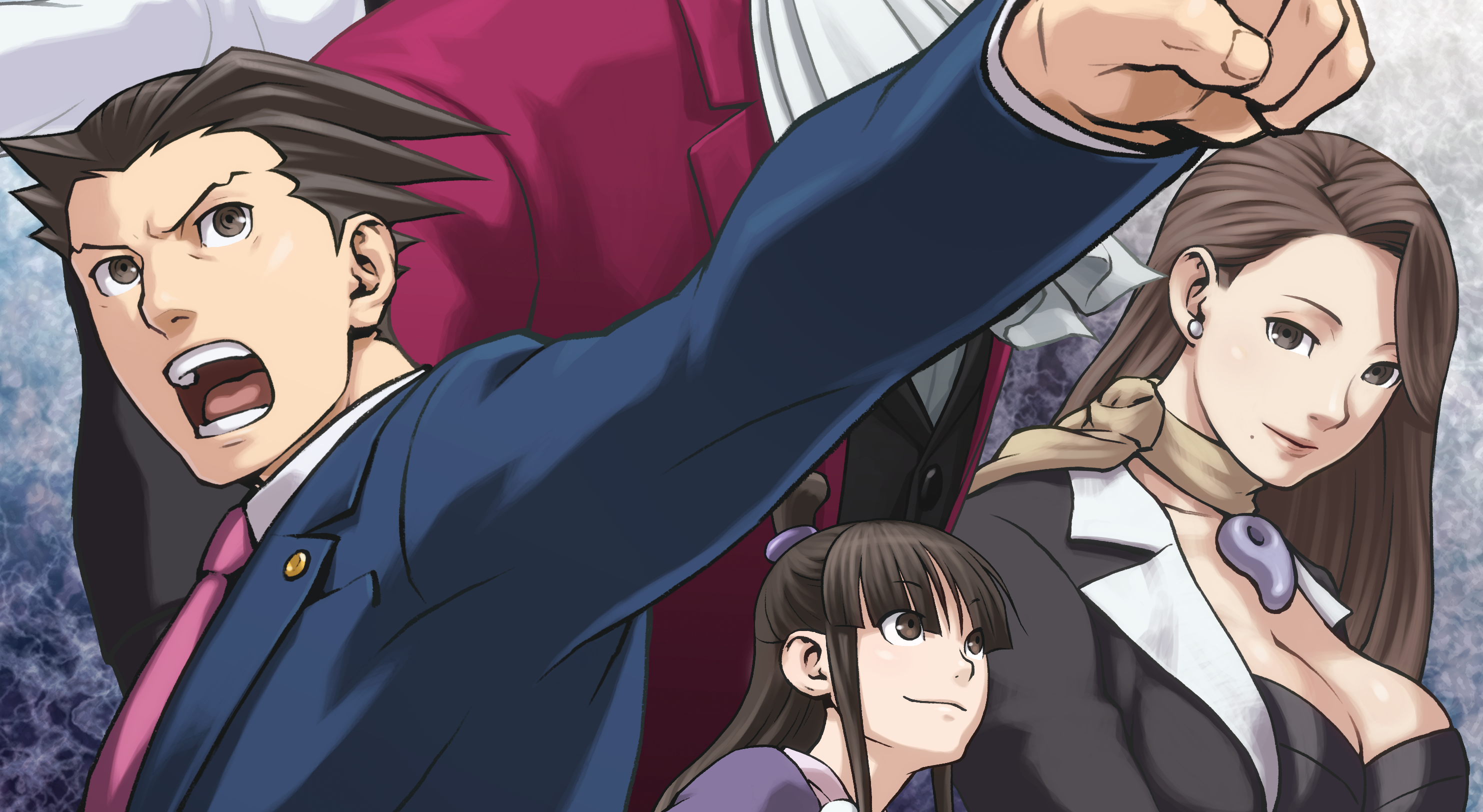 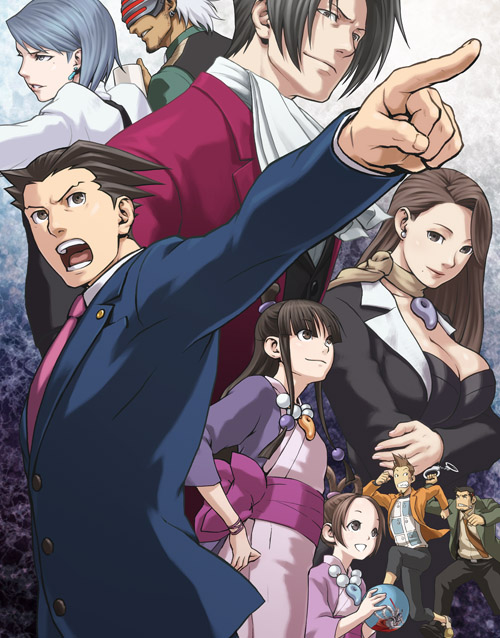 Replaying Phoenix Wright: Ace Attorney is a lot like re-reading a good book. You know all the beats – sometimes by heart – but the dialogue is as charming and entertaining as it ever was, and there are new details you pick up a second or even third time through that enrich the tale. The Ace Attorney games released on DS are ports of now decade-old GBA carts, though, and despite being well-optimized, they’re starting to show their age. If you’re looking to replay the original games, or if you jumped into the series with Apollo Justice or Dual Destinies and need to catch up, then Phoenix Wright: Ace Attorney Trilogy offers a near-ideal way to enjoy the classics.

Phoenix Wright: Ace Attorney Trilogy, as the title suggests, is a remastered compilation of the first three entries in Capcom’s acclaimed visual novel series. It brings the games from DS to 3DS with redrawn HD sprites and backgrounds taken from the games’ iPad port and layered with some simple stereoscopic trickery. The redrawn anime-style assets look gorgeous, and on a more compact screen they don’t have the same problem as they did on iPad – namely looking sluggish due to the low frame count of their animations. The 3D effect usually works well, creating the impression of a popup book, except in the detention center’s visiting room where the developers didn’t bother (or were possibly unable) to put the window frame on a separate layer. This isn’t a huge problem, but it is distracting, and it crops up often as you need to visit the detention center at least once per case.

In a market full of knights, space marines, and super fighting robots, it seems ludicrous to release a game about a lawyer, but this isn’t some mundane Law& Order style procedural. Phoenix Wright lives in a world gone mad, where phantom thieves and spirit mediums are commonplace and “dew process” refers exclusively to how water clings to grass in the early morning. Preliminary trials in this world last only three days and almost always end in a guilty verdict – a little distressing given the police force’s tendency to arrest the first suspicious person they see at a crime scene. As a result Wright’s legal battles are fast-paced, pulse-pounding affairs full of colorful characters and insane twists. 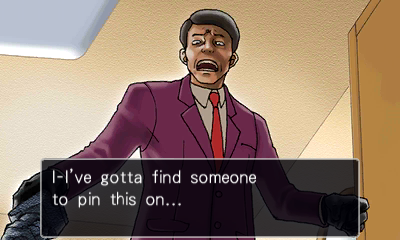 This craziness makes the series’ cases immensely entertaining, but I think it resonates on a deeper level than simple madcap fun. Despite how out-there the setting (Las Angeles circa 2016 in the localized version) seems, the problems it presents are very grounded in reality. Shu Takumi created the first game as a biting satire of the Japanese Legal System in which the only way a defense attorney can hope to win an acquittal is by identifying the true culprit and proving THEM guilty beyond a shadow of a doubt. Over a decade since that game’s release, with high-profile failures in western legal systems cropping up year after year, Takumi’s tales of dangerously inept cops and corrupt governments are as relevant as they ever were.

While that satirical bent is an important part of the series, Takumi never lets it get in the way of telling a good story. The games are broken up into five episodes apiece, each one a more-or-less self-contained mystery. These disparate events are tied together with a thread of light but compelling character drama that gives the games their heart. Unlike the protagonists of many visual novels, Phoenix Wright has personality to spare – he’s cynical but kind, he always believes in his clients, and while he can be impressively confident he’s far from immune to bouts of nervousness.  He’s assisted by Maya Fey, an eccentric spirit medium in training with a predilection for Samurai Sentai shows and a bottomless stomach. Their banter is some of the best in gaming, up there with Nico Collard and George Stobbart. 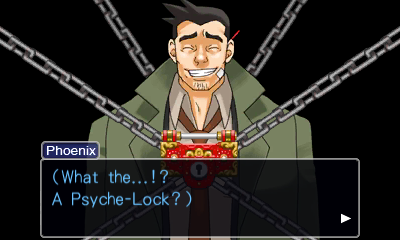 Wright’s childhood friend and present rival Miles Edgeworth makes for a great character foil, and his arc over the course of these games is arguably the most compelling part of their stories. Detective Dick Gumshoe is almost always at Edgeworth’s side, though it doesn’t do either of them much good – his comedic bumbling often causes serious trouble for the prosecution, which is just as unfortunate for him since Edgeworth dictates his salary. In addition to Edgeworth each game in the series pits Phoenix against a different prosecutor, and they all make for great antagonists in their own right, and they all abuse the defense in delightfully evil ways. If I had to pick one as a favorite, I’d go with the mysterious caffeine-addict Godot from Trials and Tribulations, who hurls his coffee mug at Wright’s head whenever he raises a serious objection.

The three games’ episodes are largely standalone mysteries – and quite good ones at that, with plenty of “Eureka!” moments that come as you solve them – but Takumi wisely integrates them into a single overarching plot. Phoenix Wright: Ace Attorney focuses on the mysterious DL-6 incident, while Trials and Tribulations (the third entry) is all built around a single delightfully maniacal villain. The second game, Justice for All, is the exception to this rule – not just in this trilogy but across the whole series. Save for its second episode, everything in it is pointless filler, and the writing isn’t nearly as funny as the filler episodes in Phoenix Wright: Ace Attorney or Trials and Tribulations. If this is your first time playing, I’d recommend skipping the second half of Justice for All entirely – it was rushed out the door just a year after the first game shipped, and it really shows. By comparison Takumi had a full two years to work on the third game, and with its tightly-woven mystery it’s arguably the best game in the entire series. 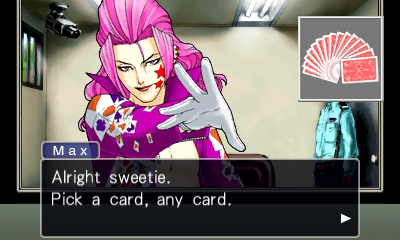 Justice for All even disappoints in the music department, which is where the rest of the series shines brightest. Akemi Kimura’s tracks are still decent, but they feel boring and uninspired compared to Masazaku Sugimori’s compositions for the first game or Noriyuki Iwadare’s work on Trials and Tribulations. Even the best music in the game is a bit of a disappointment though, as it still sounds  the same as it did way back on the Game Boy Advance. There was an opportunity here to rework the series’ songs for new hardware – possibly including tracks from the orchestra and jazz arrangement CDs released by Capcom a few years back – but sadly the graphics are the only part of the games that’s gotten an upgrade. The only original song in the package is the title theme, a fantastic medley of tunes from all three games that I’ve already set as my new ringtone.

The series’ greatest hallmark has always been its audio design – the original games made better use of the GBA’s infamously awful sound chip than anything else on the system. As I said, the music is phenomenal, but it’s the other sound work that really steals the show. 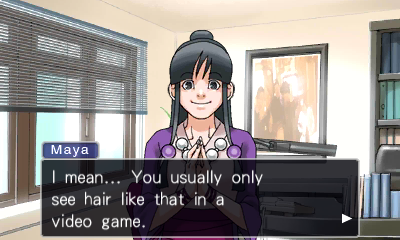 Effects like the explosive bang of the judge’s gavel help to set a dramatic tone, and different pitches of bleeps and bloops accompany each character’s dialogue boxes to give them a distinct voice. And of course the iconic cries of OBJECTION! accompanied by intense word balloons give the courtroom action a bit of extra kick. We don’t often think about it, but sound design is immensely important in visual novels – the creaks and groans of the ship in 999 do so much for that game’s atmosphere – and Ace Attorney Trilogy nails it.

The Ace Attorney games are some of the most charming, hilarious and engaging adventures on the market, and this new 3DS version makes them better than ever before. The port job isn’t entirely perfect, and the lack of a remastered soundtrack is a letdown, but two of the three games in this package are among the best point and clicks ever made, so a bit of uneven quality isn’t the end of the world. A 30 dollar eShop purchase will net you some 50-60 hours of gameplay, which is nothing to sneeze at, and the full Japanese versions of all three games are included as well — perfect for a gamer looking to practice the language and start importing.