Remember A Bug’s Life, that ’90s Pixar film about a klutzy ant that ends up rescuing his colony from an evil grasshopper by recruiting a bunch of circus bugs? And do you remember Contra, the unit of coin-op commandos that defeat Red Falcon’s alien overlord by gunnin’ through the Galuga archipelago? Well, toss the two in a flashy two-and-a-half-dimensional pot and you get MilitAnt, a quirky, sidescrolling shooter from Xibalba Studios.

Let’s start with the story, because despite boasting arcade-like qualities, MilitAnt spins a tale of civil unrest, betrayal and unexpected realizations. There’s a war between the various bug nations, and termites (whose numbers are far greater than any other bug on the planet) are attacking your colony. They want the ant’s supply of Crystallite (not the carbonated trailer-park soda), and as once-neutral forces join the termite armies, you’re left to fend for your colony alone. According to PR representative Germán Vázquez, things aren’t entirely how they seem. 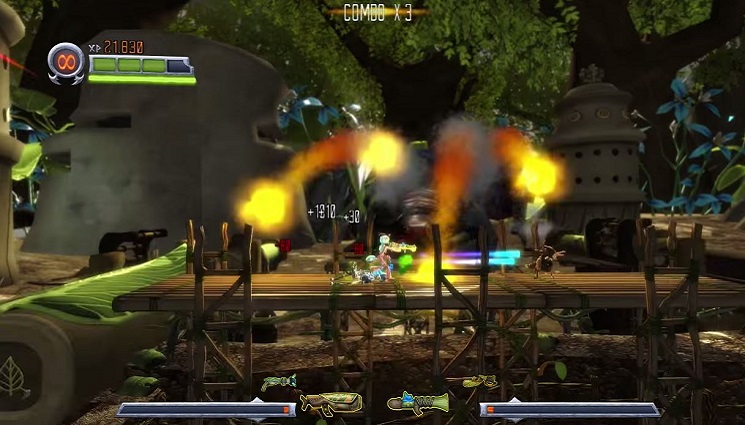 Mechanically, MilitAnt doesn’t stray far from the sidescrolling genre. Running, gunning, jumping and dashing are all fast-paced, with enemy forces digging through the earth, hanging from the ceilings and littering the backdrop in seemingly random formations. While the controls are of the “easy to learn, hard to master” variety (move with the right stick, aim with the left), the rhythm of battle quickly becomes a comfortable reflex, and popping-off distant enemies, dodging slow-moving beams and hopping around the screen like an ant in a bag of pop-rocks is as fun as it sounds.

The flow of baddies doesn’t slow, so there’s rarely time to calculate your next move; makeshift leaf-built weapons have unlimited ammo, but require a cooldown period once they overheat, and bosses are massive critters with attack patterns to memorize and dodge. It’s all very typical “hit until the health bar is gone” stuff, but the satisfaction of downing a screen-sized, fire-breathing Beetle or Caterpillar is only slightly diminished by the realization that, in the real world, your ability to kill bugs requires much less effort.

Interestingly, bugs have different racial themes. Beetles, for example, are Shogun (Japanese military commanders) and Scorpions are weapon craftsmen. Ants, of course, are a military force with inventive weaponry (constructed with leafs), and a give-it-all-or-nothing vibe that thrives the digging of impressive tunnels and the collection of crumbs from my kitchen counter because apparently the exterminator’s “guarantee” was a goddamn lie. 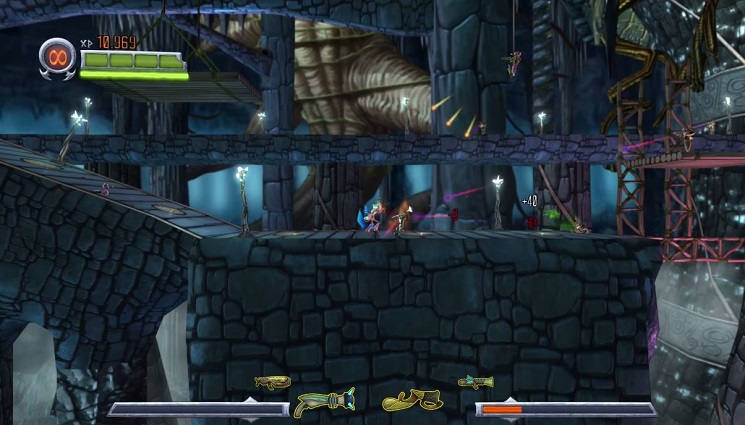 In proper video game fashion, leveling up unlocks new gear (you can buy and exchange up to 15 different weapons), and increases the firepower available in your loadout. Guns and additional arm-space can be purchased using the in-game currency (Vázquez quickly jumped-in to clarify that, “no, there isn’t anything to pay for once the game is purchased”), and can be switched on the fly (pun intended) during levels.

To quote myself from Xibalba’s booth during PlayStation Experience, “this is ridiculously fun;” a statement I didn’t make in jest. MilitAnt offers all the fun of a platform shooter with the potentially engaging story of a game that isn’t a platform shooter. And it’s coming to all PlayStation consoles this Spring, so look forward to squashing some bugs. With a rifle. And laser beams.