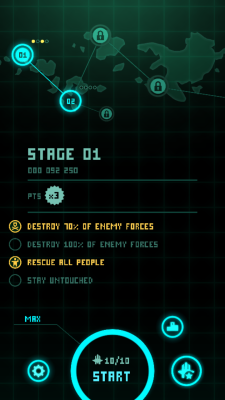 If you’re old enough to remember games like Galaga and Vector Vaders, then Sky Force 2014 will be a treat for you. This top-down shooter for iOS and Android will hit you right in the childhood, taking you back to days spent sloshing quarters into a machine for a dozen “last games.” Your main objective in Sky Force is simple: shoot all of the enemies that fly by on your screen and be sure not collide with any of them – or their bullets, of course.

This basic recipe is augmented by four medals that can be earned by undertaking ancillary objectives. Each level will reward you for destroying 70% of the enemy forces, Destroying 100% of the enemy forces, rescuing hostages, and staying completely untouched. Only by earning these levels can you unlock later levels in the game. They sound simple enough, but they won’t be easy when you first start. Older games reward you for slaughtering enemies with upgrades that can make the remainder of a level, and even those after (assuming you survive) a cake walk. In Sky Force 2014 you’re rewarded with stars. These stars allow you to upgrade your ship so that you can unlock things that would normally be pickups – like lasers, missiles, and bombs. On the first few levels you’ll be stuck with the weak main cannon unless you want to pony up a bit of cash. The only upgrade(s) you can get in-game are medals that boost fire rate and, after you make a bit of progress, pickups that reload your ammo. 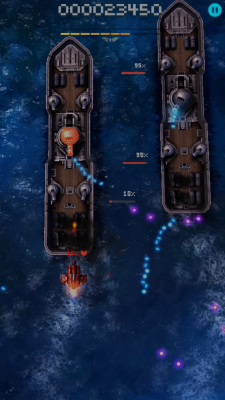 Yes, you may have to spend some money in Sky Force if you get tired of saving up stars – this is a free-to-play game. Like other F2P titles you can advance through the game without spending a dime, it’ll just take a lot longer. Unlocking wing cannons will cost you 2000 stars, and at an average of 150 per level you’ll be stuck grinding for a while. After the initial purchase, upgrading each weapon will only run you a couple hundred until you max out the category. If grinding isn’t your thing you can simply buy 5000 stars for .99 cents. The only thing you’ll be missing out on is that dollar and 20 or so repeats of the same three levels. You can also double the amount of stars you earn on each level, remove ads, and increase your upgrade rate for a bit of cash.

Sky Force 2014 is home to some great-looking 3D visuals and will definitely keep you occupied if you’ve got a spare minute. You can easily rack up the 2000 stars you need for an unlock on your morning commute, or in the middle of a doctor’s waiting room. The objectives become harder and harder as the levels progress, and enemies become more numerous and better-synchronized, so you’ll rarely find yourself without a challenge to overcome. Sky Force 2014 is available for both iOS and Android.