The controversial game Hatred, a game where you play as a madman who violently murders civilians, has become a cornerstone in the violent games discussion, but Destructive Creations gave no quarter in pushing their game onto Steam Greenlight.

…for a while, at least. Valve has already removed the game from the Steam Greenlight page. The original page is no longer available.

Valve’s Doug Lombardi has issued the following statement regarding Hatred:

“Based on what we’ve see on Greenlight we would not publish Hatred on Steam. As such we’ll be taking it down.”

It’s to be assumed that Hatred was removed for its subject matter, which includes you attacking civilians as they plead for their lives, though Valve’s statement is too vague to know for certain.

Destructive Creations issued the following statement about the removal:

As you know today we’ve launched our Steam Greenlight campaign for Hatred.
Unfortunately after couple of hours Steam shut it down giving the below as reasons behind their decision:

“We wanted you guys to know that based on what we see on Greenlight we would not publish Hatred on Steam.  As such we’ll be taking it down.”

Even though games like Manhunt or Postal are still available on Steam we of course fully respect Valve’s decision, as they have the right to do so. In the same time we want to assure you that this won’t in any way impact the game’s development, game’s vision or gameplay features we’re aiming for. The game is still to be released in Q2 2015 as planned.

Moreover we don’t treat this as a failure because yet again this showed us a huge community support we’re totally overwhelmed with. After only a couple of hours Greenlight campaign being live, Hatred gathered 13,148 up votes and ended up on a #7 on Top 100 list. 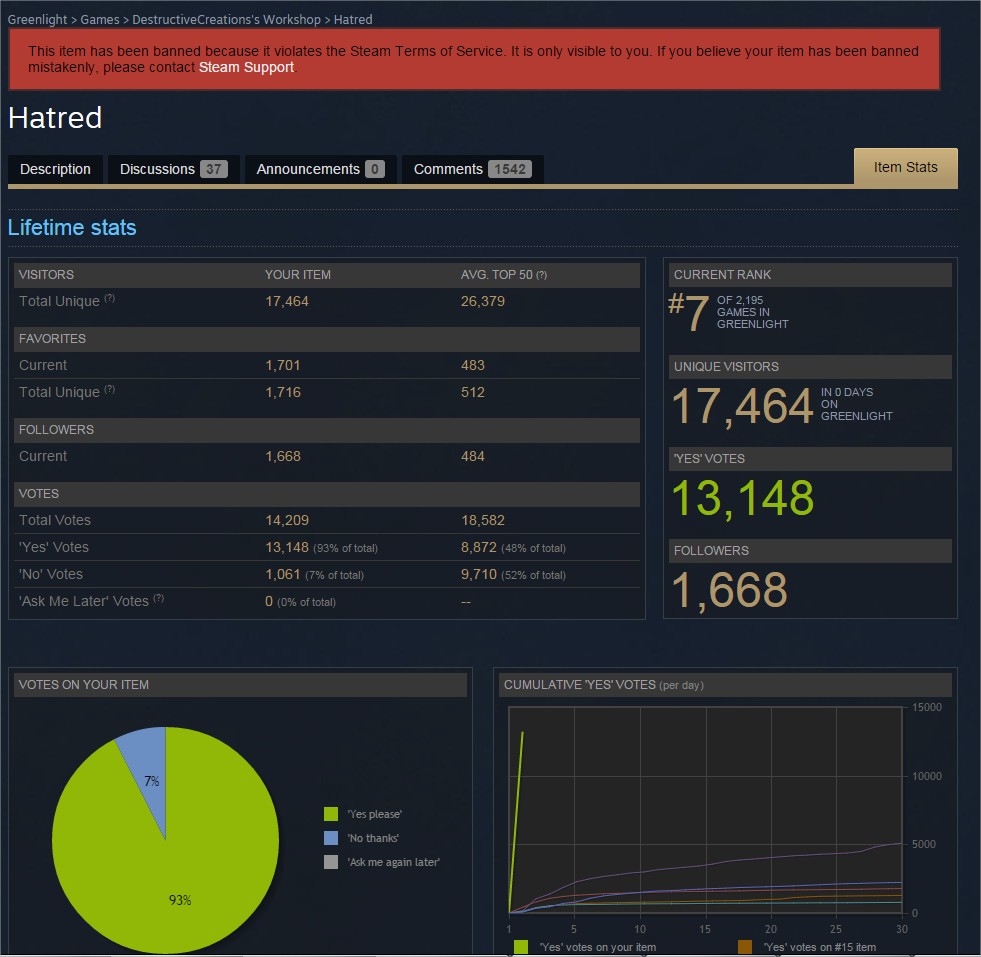 This is the best proof for us that there are diehard Hatred fans out there, waiting for this game to be released. And that we need to keep going to deliver them a game that offers exciting and challenging gameplay.

The whole situation only pushes us forward to go against any adversity and not to give up. It also makes us want to provide our fans Hatred pre-orders sooner, as many of you have asked for them.

At the end of the day you, gamers will judge if we were able to do a game that’s simply fun to play.