Independent game developers have always been known to do whatever they desire, but more recently we’ve seen many utilize video games primarily as a story mechanism. Dear Esther and Gone Home may be the best known of this style, though innumerable games provide a similar story first initiative. If you’re opposed to these types of games by default then you won’t like Ultraworld either. Of course, if you’re willing to give any game a fair shake then this one might just surprise you. Just don’t jump in expecting a focused puzzler or platformer since this title is neither.

So, what is Ultraworld then? In one sense it could be viewed as a sort of digital vacation. Your main goal is always to meander and explore the various levels. There’s a key story element which explicates why you’re doing so but stating these outright would spoil a key component of the experience. Developer Neon Serpent LLC basically states it relates to “helping a video game character” which is about as nondescript as themes go. Personally, although the story may be a bit contrived I found the plot unique for the game space. During your exploration you’ll uncover new tidbits of story as well as uncover existential questions to keep you thinking. Some have found these aspects eye-rolling, but they personally struck me as heartfelt.

Now, the goal isn’t simply to explore the polygonal landscape – although getting lost in it is enjoyable on its own. If you simply hone in on “gameplay”  then it’ll be super routine. Each area has a handful of black floating triangles which must be collected. After doing so it’s possible to warp back to the hub world. Players who investigate just a bit further will discover a secondary goal and additional plot aspect. With that said, finding these other objects doesn’t elongate the experience too much longer. They are better hidden than the triangles at least. Even so there’s not much to do after taking some choice screenshots during your walkthroughs. Most should be able to beat Ultraworld in 1 to 2 hours. 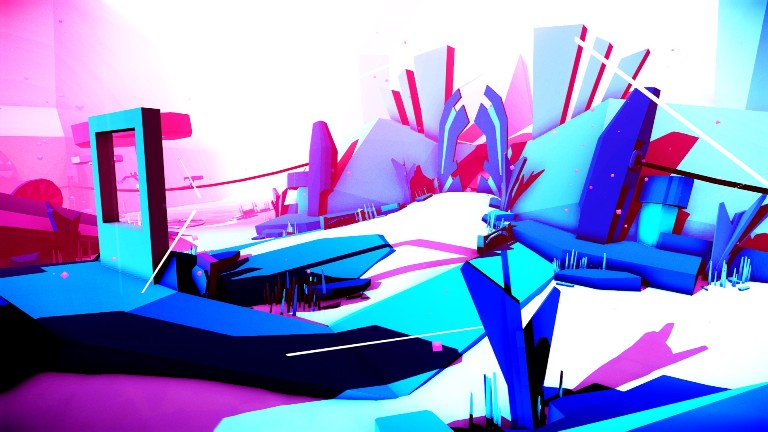 At this point it might seem like Ultraworld doesn’t have a ton to offer. From the gameplay aspect this is true, but again, it’s not trying to offer that sort of experience. Instead excitement is meant to come from its storyline and distinct landscape. In some ways it honestly feels like the aesthetic wins out between the two. This “Ultraworld” simply looks fantastic for fans of geometric, low poly architecture. Colors also paint the landscape in truly attractive ways and change dependent on the theme of every area. The soundtrack provides a perfectly ambient companion to its abstract visuals. For the variety of issues which the game contains there’s no complaints to lodge at its music.

Because the game is such a visual experience, the default film grain filter simply must be addressed. Perhaps it was an attempt to create a textured environment, but it just obscures otherwise gorgeous landscapes. It’s especially annoying when it disappears in certain light only to reappear later.  At a later point you gain access to changing graphics filters, but they also tend to change colors as well. Why there’s no menu option to toggle off the grain is beyond me.

The biggest issue with Ultraworld has nothing to do with its gameplay or filters, but simply concerns the Steam release itself. Unfortunately, it seems corrupt files are present in the build which cannot be patched out. Whatever the case may be, this is probably the worst situation for a developer because it means new players must follow a few preliminary steps to even play properly. It’s a huge shame because some players are going to be turned off before ever stepping foot in the surreal game world. 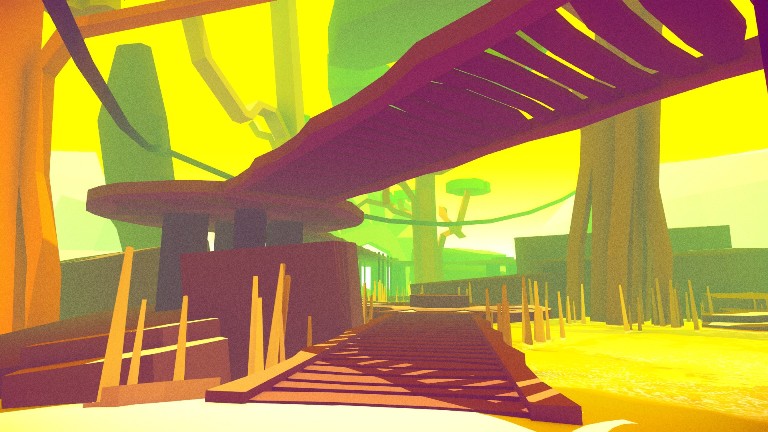 Ultraworld is a seriously distinctive game that deserves credit for its beautiful, if sometimes bizarre, world design. The story’s delivery also happens to be quite unique and offers a few cool twists before completion. It’s a shame, then, that there have to be technical startup issues with the Steam release. Players looking to walk about an otherworldly landscape, engage in a light collecathon and watch a strange story unfold may be able to overlook its issues if they can see past its awful grain filter.