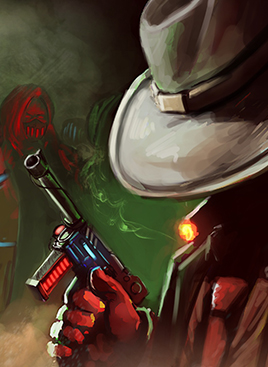 The city is a mean place, ugly and cramped and swarming with the worst humanity has to offer.  T.J. Trench wants out, and seeing as s/he’s only got one marketable skill, earning the money to buy papers out of town requires taking on a whole lot of contract killing jobs.  Metro City is a vicious place, but profitable if you’ve got the skills to survive.

Metrocide is a fairly simple game.  You’re in a city viewed from a very high perspective, like the original Grand Theft Auto but with an even more zoomed out view.  There are no cars or other vehicles to hijack, and while police drones and other troublesome witnesses fly overhead now and then, the rest of the world seems to walk around on foot.  That’s convenient for you, though, because if people could just drive off it would make them harder to stalk.  There’s a compass pointing out the next objective, whether that’s a contact with a job or to your next target, and your job is to carefully track your prey until you’ve killed enough people to buy your way out of the city.  If a couple citizens get taken down in the crossfire while you’re at it, then at least they had the good grace to drop their wallets.  “Get contract, kill mark” may be simple on the face of it, but things get rapidly tricky thanks to all those people being potential witnesses.

The citizens of Metro City aren’t just set dressing but rather trouble on two feet.  Sometimes they call the cops, sometimes they go vigilante and shoot anyone carrying a weapon.  On the plus side, that means in a firefight they can be as deadly to your mark as to you, on the down side it’s easy to miss a tiny pixel-person when concentrating on lining up a shot.  Guns in Metrocide are instantly deadly, with one-hit kills for everyone.  Contract target, random citizen, gang member, you, it doesn’t matter.  If you take a bullet, you’ll be starting the level over with no credits and all tools and extra weapons gone.

At each level’s start you’ve got your trusty blaster, which, while it won’t trip security scanners, is slow to charge a shot.  As you take down targets new weapons unlock at the shop, and once open they stay available permanently for a price.  After unlocking a better class of target that price is generally about two kills, with enough change left over for some extra ammo, and then you’ve got a shiny new gun that has a zero charging time.  Illegal, of course, and going to cause serious problems with a police force that shoots first and doesn’t really care enough to ask questions after, but nice if you live long enough to use it.  Metrocide is hard, and there’s more ways to die than strategies to kill your target. 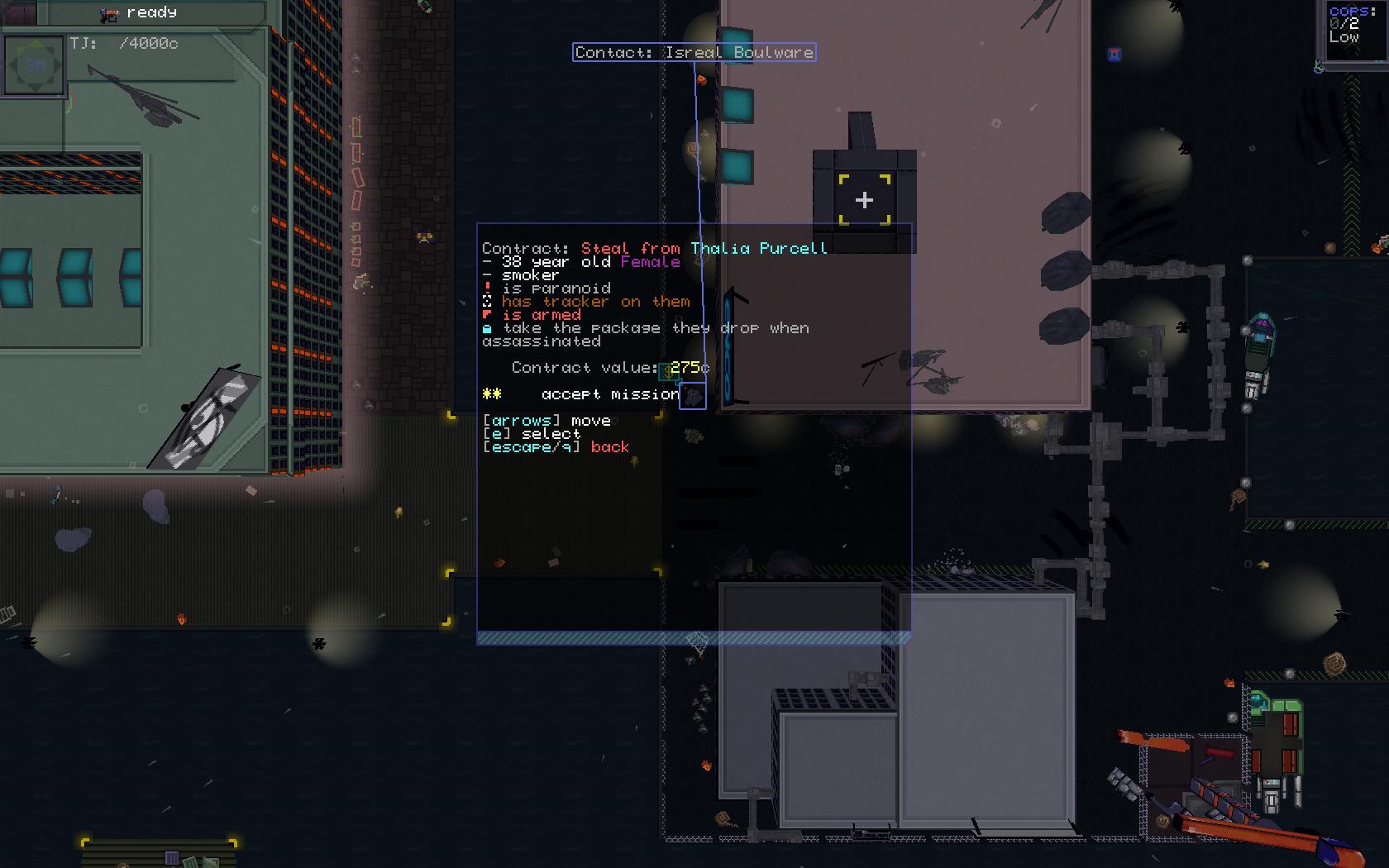 Flash your gun in front of the wrong citizen?  He’ll shoot you dead.  Scanned by the police?  Your gun is unregistered and they’ll shoot you dead.  Run away from the scan?  Resisting arrest, dead.  Give your mark time to shoot back?  Probably dead.  Metro City has a definitive and very final method of dealing with its problems, and it involves chalk outlines and body bags.

While that sounds maybe a bit much, you can also use every bit of it against your target.  Citizens and police will kill them as fast as you, so if you pull the old Innocent routine it’s a lot of fun to get a vigilante to take out your target for you.  So long as he’s dead (or you’ve collected the files you need to steal from his corpse, depending on the mission) you get the payoff.  There’s a certain satisfaction from timing the perfect kill, of course, and then carefully dragging the body to an open manhole and dumping it in to both hide the crime and get a nice Incognito bonus, but if that’s not possible you might as well brush up against an armed paranoid to make them draw, then duck around the nearest corner as quickly as possible while a firefight erupts.  Clean as a whistle or with blood clogging the gutters, you get paid either way. 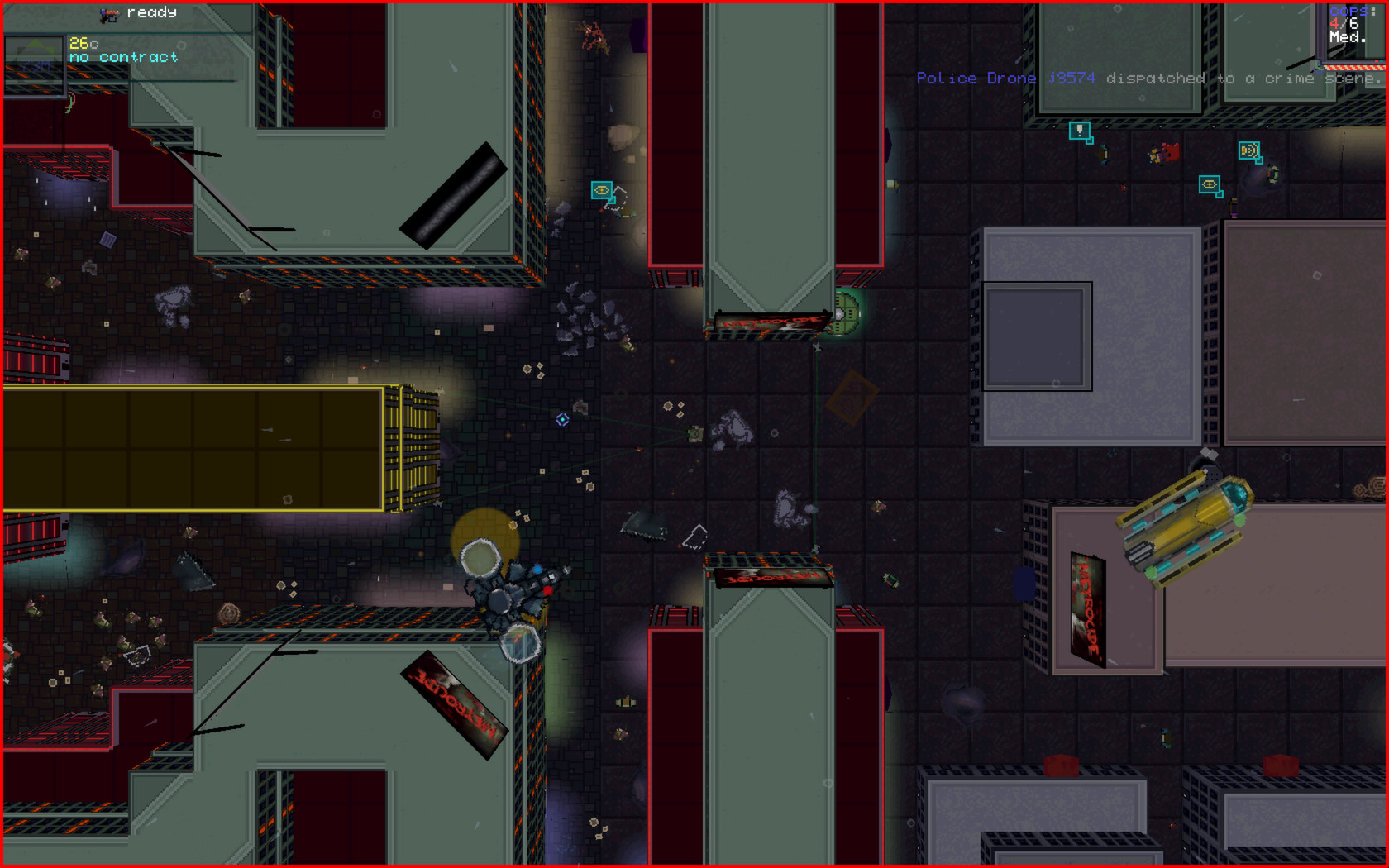 Because everything is so deadly, however, that means action is short and sharp, and usually follows a lengthy period of scouting the perfect location as the target ambles down the street surrounded by witnesses, refusing to go anywhere near a place you could use as cover.  For such a violent game, Metrocide is surprisingly low-key most of the time, with ambient audio adding to the oppressive, downbeat tone of the city.

It’s also, unfortunately, fairly buggy at this stage of release.  Crashing to desktop is never fun, and especially un-fun when you’re $3000 towards a $4000 goal and each hit is only worth a couple hundred.  Rigging up an explosive charge to blast an unsuspecting target into small chunks is a lot more entertaining when your progress doesn’t get wiped out by complete program failure.  There’s also no controller support, key rebinding is coming soon, and the user interface can kindly be described as “spartan”.  Honestly, though, the missing polish is only lightly problematic compared to an inability to progress due to the game crashing regularly. 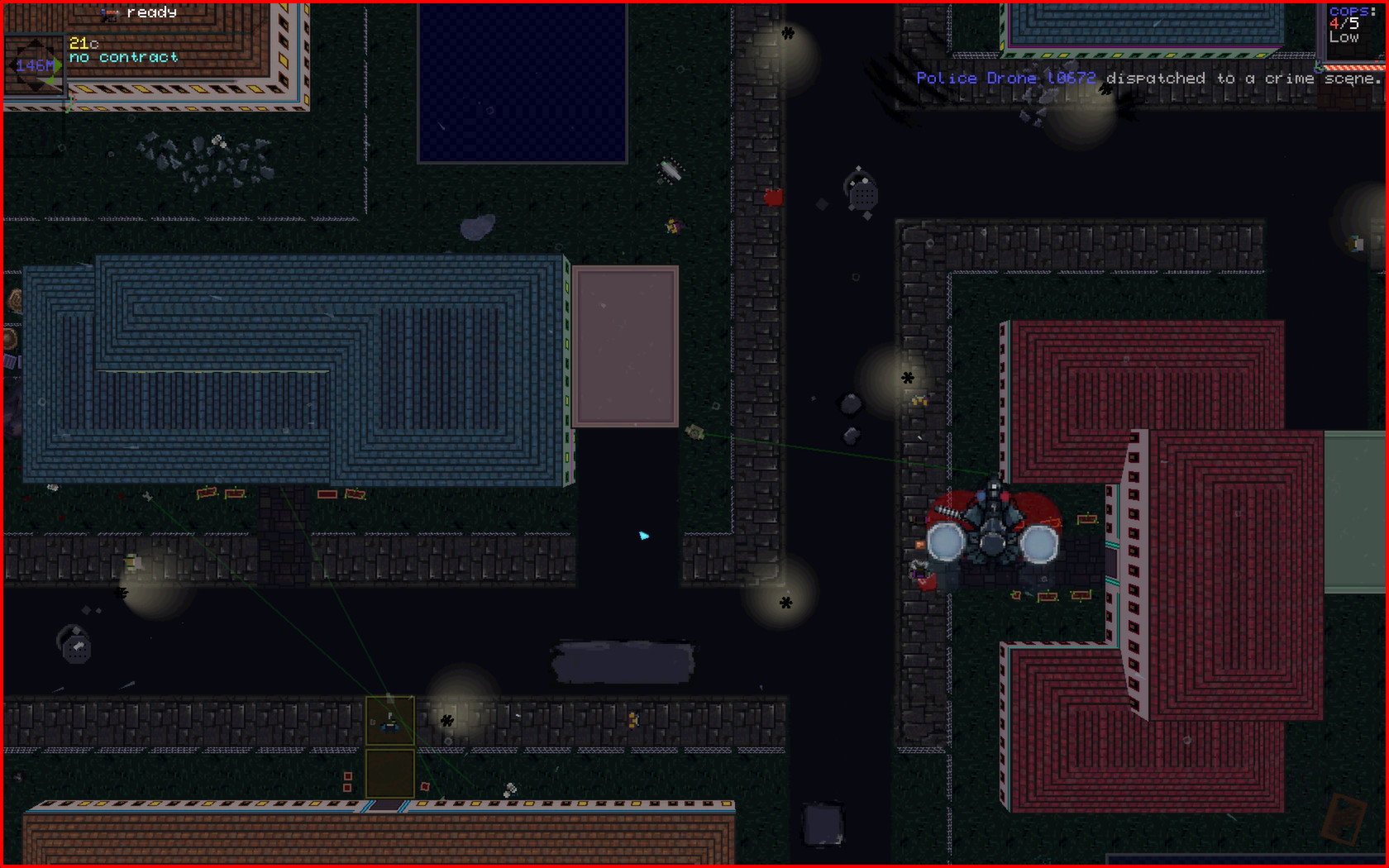 Metrocide is close to being a cool, harsh game of dystopic-future homicide.  The city is populated by hordes of tiny people going about their business despite the endless rain and crushing security measures, and they’re given just enough purpose to make the place feel properly lived-in.  The targets all have names and a few character traits that directly tie in to the difficulty of taking them out, and despite the super-tiny nature of everyone scurrying about they somehow feel like people after a while.  It’s a nicely dystopic future, but needed to walk the mean streets of development a few more weeks before busting out to the big time.