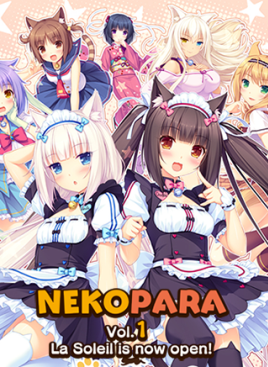 Kashou Minaduki is a young man with a dream. Throughout his life he’s loved baking but had to do so in private, away from the disapproving eyes of his family. One day this becomes too much to bear and Kashou suddenly moves out to finally run a brand new bakery, La Soleil. Much to his surprise, however, the nearly empty bakery has two huge shipping boxes inside – and out pop two catgirls! NEKOPARA Vol. 1 begins with an incredibly goofy anime-style bang and continues in that humorous way. You might be surprised to find, however, that there’s more to this visual novel than simple goofball antics.

What’s the deal with these catgirls? In the world of NEKOPARA there’s absolutely nothing strange about it. Apparently, catgirls live among humans normally and are often taken up as pets, workers, or romantic partners. Whatever relationships humans have with their catgirls are plainly accepted, although the protagonist seems to have a problem accepting this all as commonplace. Although they look so much like humans they still have many cat traits such as pawing madly at cat toys or drooling over fish and catnip. It’s an incredibly odd thing to consider from the get go but it almost becomes “normal” by the end of Vol. 1.

The misadventures between Kashou and his two sudden catgirl staff members, Chocola and Vanilla, start off as pretty average. Here is a guy who was fully prepared to strike out on his own when suddenly two of the family pets show up! As readers see them all interact it’s hard to not see how positive and enjoyable their presence is. In any case, the story progresses and issues grow more complicated about halfway through. Even though this is the first of a possible series of visual novels, it also ends on a high note. This is much better than the cliffhangers other titles are apt to use.

Visual novels may not require stunning graphics to be enjoyable, but all the same this one has some seriously engaging art. Of course there’s the flashy anime artwork for each character but there’s even more at play. What can’t be conveyed via screenshots A so called “E-mote” system animates each character in a lively fashion. In fact, it looks about as close as you can get to actually watching an anime series in a visual novel without going full out with animated sequences. Sometimes this does look weird though because this huge focus on E-mote means the girls are wiggling about as if they have to pee. Perhaps that’s all supposed to be cute but it comes off as distracting. 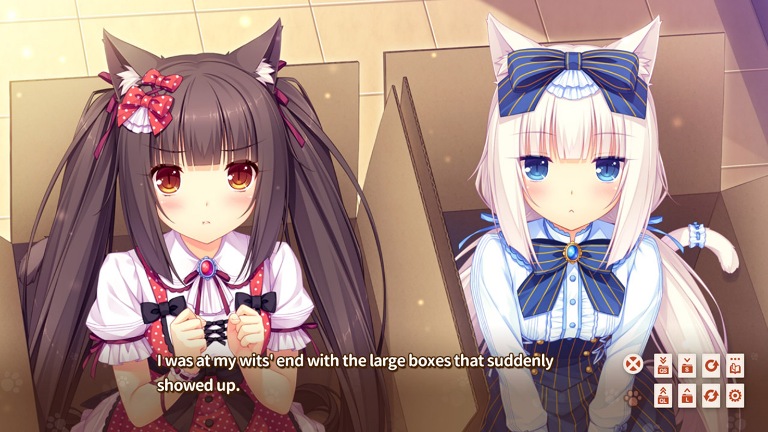 If you’re not a big visual novel fan then NEKOPARA may honestly shock you with its lack of decisions. Throughout an entire playthrough of the game you won’t ever have the option to choose between anything. No dialogue choices or no actions present themselves. The reason for this is because it’s what known as a “kinetic novel.” Your main goal as a reader is to simply enjoy the story that plays out at your own pace. There are achievements in the Steam release but these simply pop up after experiencing each of Vol. 1’s eight chapters.

Despite nothing being shown, younger players should probably steer clear. I just have a feeling many may “accidentally” discover the game since it looks fairly innocent with brightly-dressed catgirls parading about. Depending on your reading speed it should take anywhere from three to seven hours to play completely. 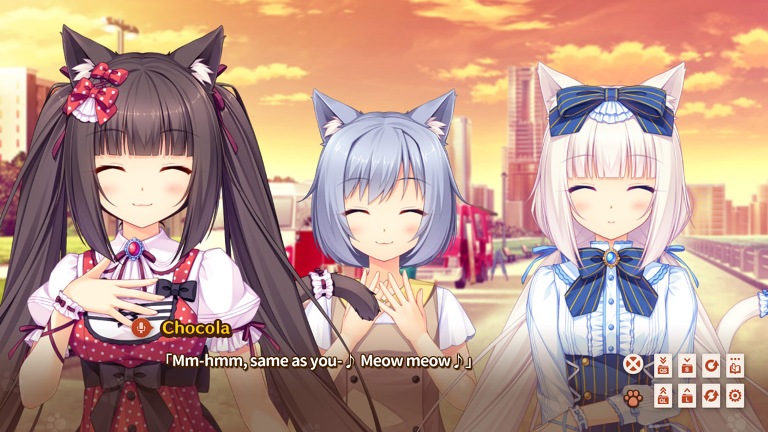 NEKOPARA Vol.1 looks like it fits 100% into an outsider’s view of visual novels; a dull, fandom-focused story with pretty girls who do nothing but dote on you. Yes, these catgirls are pretty devoted, but there’s more going on than a simple harem storyline. One can’t help but be intrigued by Kashou’s devotion to baking, understanding both catgirls, and wanting to see everything turn out well. With that said, some may be put off by the sexual storyline aspect which suddenly shows up. Others might be mad knowing they’ve missed out on some scenes due to Steam’s restrictions on adult content. Still, NEKOPARA is a light and fluffy visual novel that fans of catgirls will enjoy their time with.