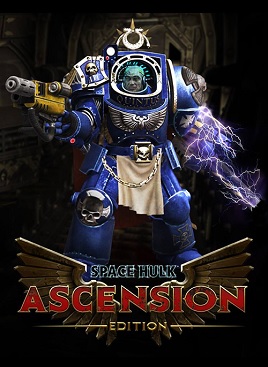 The Warhammer 40k universe is a gritty one unafraid to show man at his darkest hour, and to tackle and ask the tough questions about the cost of a life, and the impacts of war both in a micro and macro sense. Thus, it usually makes for compelling video game backdrops, where death and killing are ever-present, and usually the center of the experience. But, not all installments that bear the title are a success. While 2013’s Space Hulk had some quality concepts, they were not fleshed out, ultimately resulting in something that felt less than what it could have. Developer Full Control is back, though, with the Ascension Edition – a refinement to the turn-based strategy formula and another chance to win over newcomers and series veterans. How do their efforts fare?

Much like its world, Space Hulk: Ascension Edition is a cerebral game that doesn’t blink an eye at picking apart players’ nerves with deliberate pacing. The claustrophobic environments, the intentional lack of illumination and the swiftness of enemy attacks pummel players pretty much right from the start. The in-depth tutorial attempts to prepare folks for this digital hell, but it’s really just a small primer for what’s to come. In fact, on the surface, Space Hulk looks like a simple enough game, but beneath that façade is a deeply nuanced strategy game, laden with interesting mechanics.

From the start, players have the option to choose between three different Space Marine factions (‘chapters’, as they are called here): the Blood Angels, Ultramarines and Space Wolves. Each makes use of a particular style of play, so knowing what makes  one tick will be a deciding factor in how much enjoyment is taken away here from the experience. For instance, the Space Wolves excel at melee combat, whereas the Ultramarines are long-range specialists, leaving fan-favorite Blood Angels to combine the two approaches into one. Understanding each chapter’s strengths and limitations is quite critical to success, as enemies will routinely exploit those weaknesses without hesitation. 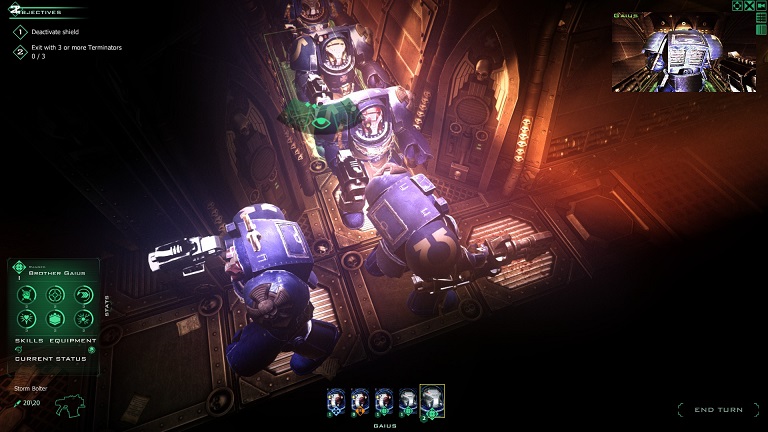 Once a choice has been made, players are provided three six hour campaigns to dive into comprising a hundred unique missions. What’s even better is that each of these campaigns focuses on one of the aforesaid chapters, telling a different tale that spotlights each faction individually. This all has been substantially increased from 2013’s outing, where there were just a few dozen scenarios in which to participate. Therefore, it’s easy to see already that Ascension Edition is shaping up to be a better game than its predecessor.

But while there are tons of missions, the narrative thread that weaves them together leaves a bit to be desired. None of them are set up particularly well, and unless players are interested in reading a throng of text briefings before things pop off, there’s not much to sink one’s teeth into from a story perspective. It would have been nice for the deliverables to at least be voice-acted, even partially so, as the strict text-based briefings feel like a slog to get through. As a result, the story elements will only serve a certain two segment of the audience, seeing as there will invariably be those who just want to skip straight to the gameplay, and the hardcore lore-nuts who are going to pour over every ounce of text in order to learn as much as they can about the setting they so admire regardless. The players in the middle of those two polarities, however, will be the ones missing out — we’re just not sure how big that market is.

Nevertheless, this isn’t a game about its harrowing plot; but that’s not what Space Hulk has ever been about anyway. It’s about putting on one’s thinking cap and using a sound, tactile mind to eliminate foes every chance there is. To get into the action, though, there are some customization screens to plow through — and this is where the actual strategy begins. The squad screen will look a bit different this time around for players of the original game. In fact, this is probably one of the most notable improvements, which is good in that 2013’s iteration felt incomplete with regards to this domain. Ascension grants players the opportunity to change equipment loadouts, character appearances and even upgrade skills via the XP earned from mission performances. It’s hard to believe this was missing in the first game, as it feels not only expected from a game in 2014, but necessary for effective troop management in a strategy-heavy title such as this. Considering the scope of the campaign too, and the variety of situations players will find themselves in, being able to outfit units to one’s liking is just what Space Hulk needed. 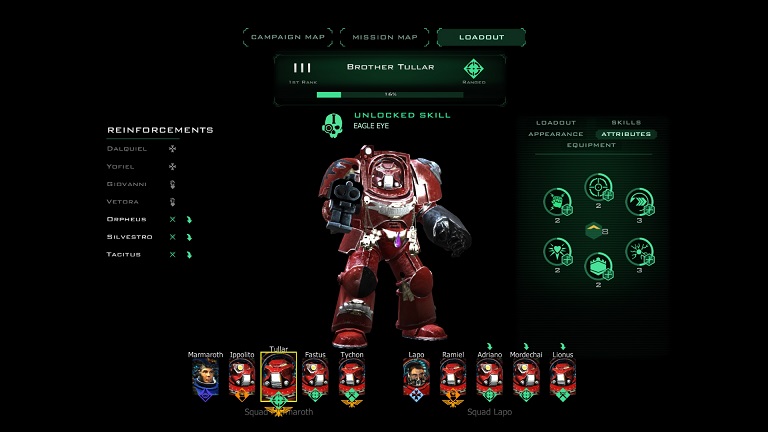 In terms of actual play, Space Hulk is a top-down, turn-based strategy game that has players maneuvering through the tight corridors of space stations and ships in an effort to exterminate those that would threaten their kind. Space Marines require action points to perform any and every maneuver they have at their disposal, from attacking and defending to merely doing an about-face to change the direction they are facing. Through spending these points, the goal is to fulfill whatever the mission’s objectives are, and basically stay alive — something not easily done (but more on this later). Nevertheless, just reading that, one can probably piece together the fact that missions are meticulously-paced, with so much more to keep track of than only what’s immediately surrounding the player’s five-person squad. Sure, there’s the need to be mindful of flanks and the like, but there’s also the need to monitor enemy spawn points, secret passage ways where enemies can infiltrate in order to ambush players, as well as staying up on how each squad member is positioned and doing overall. It’s a tall order, and one that feels sometimes overwhelming. It’s also almost always horrifyingly intense. But with the added tactical options for shooting and killing, there are more ways to dispatch baddies this time around – baddies that have also found themselves with more variation thanks to a widened beastiary for the Ascension Edition.

This is actually what makes Space Hulk such a quality game: much like its source material, the ambiance and actual combat are brutal. Enemies shred players without remorse — and do it much faster than anticipated — and moments where the area is a little too quiet for comfort becomes substantially anxiety-provoking, especially in long play-sessions where, by the end, one’s nerves are all but shot. One thing that remains a fixture in the experience from the base title to serve this very concept is how disproportionate the odds are for players to overcome. The deck is stacked against folks from the start. Now, they’re not insurmountably so, but still, this is a game that’s meant to be challenging. And it is. But with that comes great reward. Conversely, just as victories can feel so satisfying, defeats are crushing and beyond frustrating at times. Players who are easily angered by game over screens may want to steer clear of Space Hulk because of this. 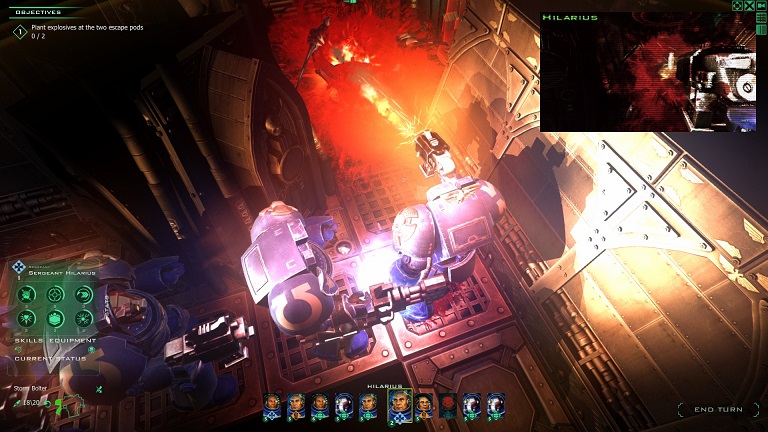 Thankfully, one of the key components that made the whole thing so maddening last time has been vastly enhanced. The UI was nothing short of awful in the original title. It was confusing, non-descript and occasionally felt like more of an enemy than the actual ones on-screen. Developer Full Control Studios has overhauled things to deter this sentiment. What we’re left with, then, is a more streamlined, intuitive setup that generally benefits the player, more than hinders them.

One thing that hasn’t made the cut in this area — that probably should have stuck around — was the last game’s ‘undo’ option. This was great if an individual made a move they wished they didn’t, or accidentally fumbled a mouse click and sent their guy charging into a horde of death-dealing Genestealers. Now, we get the ghost of our squad mate appearing at the projected destination of a move, but once the button has been clicked to confirm the action, there’s no turning back. We certainly understand that this was most likely meant to force fore-thought into each maneuvering choice; but when my dog decides to throw-up all over the carpet behind me, and I’m scrambling to help her and in the process accidentally order a squad mate to take up position right next to said horde of Genestealers, I want the ability to redo that action. Considering how precious action points are in the first place, it’d be great not to lose them to an unintended, yet irreversible decision.

Aside from the gameplay tweaks, the audio-visual portions have been touched up as well for this endeavor, though they’re a little too dark and samesy consequently. One can only look at the same texture palette, darkened hallway and sci-fi internals for so long before it all starts to have a been-there-done-that feel to it. But overall, the graphical fidelity is better off now, with crisper animations and models, in addition to a haunting musical score. Fortunately, animations are now skippable too; so no more watching one’s Space Marine sluggishly dissect an opponent for the 1,345th time. 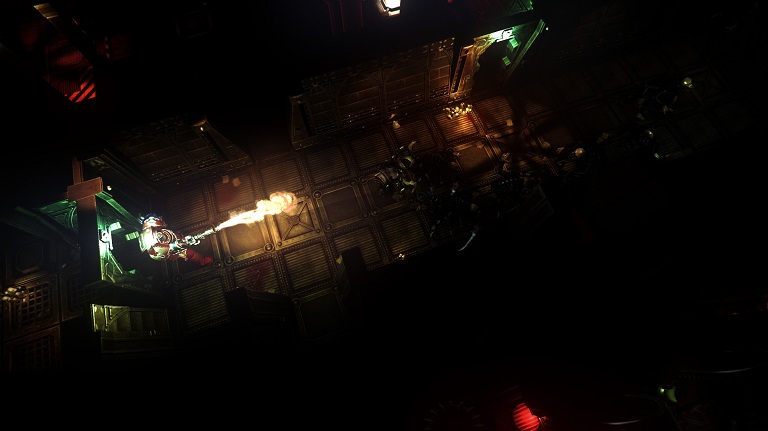 Space Hulk: Ascension Edition is the more complete and refined version of 2013’s title bearing the same namesake. What was detrimental in the past has now been either modified effectively or done away with outright, making for a game that is easier and more enjoyable to play. Whereas Space Hulk felt like a digital recreation of a board game, Ascension feels more like a video game. As such, fans of the Warhammer 40k universe, in addition turn-based strategy buffs, will want to take the plunge with this one as it’s an an authentic, faithful adaptation of the classic tabletop game. Itt might just be the closest thing you’ll get to the experience without having to devote hours of your life painting miniature figurines.